Michael O' Leary was known for ignoring the formal Labour Party machinery for much of the time - his leadership had a disastrous effect on the already weakened Labour morale and organisation . Above all , Micko suffered from a severe problem of credibility ; no-one ever really took him seriously !

During the 1960's , the political 'Left' regarded his infantile socialism with a measure of affectionate sceptism , and few were surprised when he performed an abrupt U-turn after the 1969 election . He was elected leader largely because there was no credible alternative , and even then the (State) Labour Party soon came to regret its mistake . His change of party and of constituency merely served to widen an existing credibility gap .

But despite his notorious impetuosity , Michael O' Leary is also capable of careful calculation - for example , his defection to Fine Gael was prompted at least in part by an opinion poll suggesting that he had little chance of holding his Dublin Central seat : abandoning a once-safe seat would have been unthinkable for a Party leader , and so a change of constituency was just as important as the change of party .......
(MORE LATER). 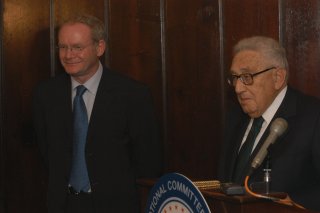 DISARMING MARTIN .
All (P)Sinn Fein leaders have a series of mantras and mini-speeches which they seek to get into every interview , regardless of the question .
The task of the journalist is to avoid setting off these reflex responses : the problem with Martin McGuinness is that he does it so pleasantly that it seems impolite to interrupt him .
From 'MAGILL' magazine , March 1999 .
By John Waters .

Listening to the modern-day (P) Sinn Fein leader , one rapidly develops an image of - sometime in the 1980's - a kind of paramilitary Bunny Carr going around giving seminars in safe houses , teaching republicans how to talk in unbroken flow without directly answering questions : Martin McGuinness would have been his proudest achievement !

McGuinness's apparent openness is such as to be ... well , 'disarming' . His eyes , smiling and unflinching , suggest acute friendliness and empathy . It would be easy to imagine that this man was about to unburden his soul . Alas , there is an appropriate comparison to be made between the unionist tactic of delay and procrastination in matters relating to the establishment of the 'shadow executive' , and an interview with Martin McGuinness : you have , perhaps , an hour , which seems more than enough to deal comprehensively with a number of focused , precise questions .

But McGuinness is not in the business of giving focussed , precise answers . Like other republican (sic - 'Provisional') leaders he exhibits a tendency which for interviewers is like being given a suitcase full of obsolute currency . All (P) Sinn Fein leaders have a series of mantras and mini-speeches which they seek to get into every interview , regardless of the questions asked . It is as though these mantras and speeches reside in tiny programmes at the back of their minds , their objective in interviews being to find the first available opportunity to press the nearest relevant button and kill five minutes of interview time.......
(MORE LATER).

Niall Ferguson justifies everything in the end because , he argues , the 19th century's biggest superpower kept the peace (!) : 'Pax Britannia' made the world a safer and more stable place than the scary , fragmented world we have today (!) .

When Tony Blair made a speech to his ambassadors in January , he held up the 'good intentions' of Britain's colonial past ('1169...' Comment - "...past.." ? There are six Irish counties that beg to differ , and a gutless 'parliament' in the 26-County State populated with political whores ....) as something to insipre its future - or , putting it another way : " Where there is war , we should sow peace ; where there is tyranny , we should sow liberty." How can you argue with that ? But when you are no longer a superpower , how can you implement it ?

Tony Blair's answer is simple - he cannot , but he will support the USA in its role as the policeman of the world.......
(MORE LATER).