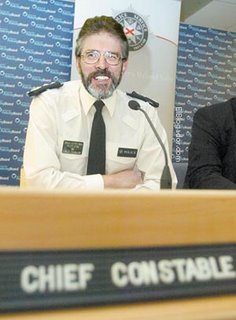 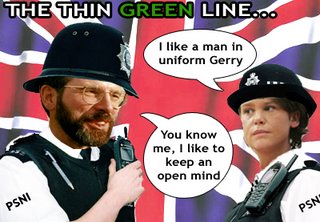 A fitting end , in new employment , for those that left the Republican Movement in 1986 : however , our proud history of resistance and struggle has ensured that true Irish republicans are not surprised with , or dejected because of , the actions of those who seek to build 'political careers' for themselves within the 'establishment' they once fought against . We now have - once again - ex-colleagues wearing the uniform of the enemy and using the 'authority' of said uniform to hunt down their old comrades . It failed in the past and will fail now , too . The Provos are setting themselves up to be guardians of a flawed establishment and , in doing so , have forgot that it is not the job of the occupied to provide security for the occupier .
Ni Seoinini Sinn Go Leir !

Photographs and comments regarding the 2006 Cabhair Christmas Day swim can be found here, here and here. Meanwhile , the '1169...' crew are not yet finished their turkey and mince-pie : see you all in the New Year !


A PEACEFUL CHRISTMAS TO OUR READERS !

A just and permanent peace in Ireland is most desirable . It is the greatest gift we could give to ourselves and our children . We have been denied justice and peace for more than eight centuries , because of English invasion , occuption and misrule of our country .

This happened before when the Treaty of 1921 was signed and was forced on the Irish people in the name of peace . Republican Sinn Fein cherishes the objective of a free , democratic Ireland , as envisaged by Wolfe Tone and all Republicans down to 1916 and our own day . Many brave men and women sacrificed a lot , even their lives , for this noble Cause .

The '1169 And Counting... ' crew are on a short break but will be back at their desks in '1169 Towers' in early January . Between this and then take care of yourselves and don't forget about your Irish friends , colleagues and comrades on this isle as we enter into the 838th year of British occupation .
Beannachtai na Nollag agus slan go foill anois !

As confirmed here and here , a sponsored swim in the Grand Canal at Inchicore in Dublin will be held this Christmas day at 12 Noon !
This event has been held on every Christmas Day since 1976 , and has , as usual , been organised by the Cabhair group (details here) , an organisation which seeks to assist the families and dependants of Irish Republican prisoners . The swim , which will be held in the Grand Canal opposite the Blackhorse Inn ('Kelly's on the Bridge') pub at , as stated , 12 Noon , has been known to attract upwards of 200 on-lookers and the organisers supply a turf fire , music , and some food and 'light refreshments' for all those present !
If you can swim , come along on the day and earn your place at the turf fire or at least , perhaps , watch others doing so and maybe even donate a few shillings for their efforts . CABHAIR is an organisation run by voluntary effort and would not accept donations or subscriptions from the State (nor has it ever looked for same) and , as such , would greatly appreciate any financial assistance you can offer .
Go ráibh maith agat , agus Nollaig Shona !