At 11.40am on the first day of proceedings , Harry Kirkpatrick turns around and identifies Seán Tumelty: (and here) he claims that Tumelty was involved in criminal acts and , pointing at him , declares - " He is sitting facing me , third row , and second from my left hand side beside the prison officer." Kirkpatrick does the same for the other twenty-six men.

Seán Tumelty has a steel plate in his head and , several times during the hearing, he lets out a scream and collapses from the pain , at which point the court adjourns and resumes again when Tumelty has recovered. He was hit by a plastic bullet at point blank range in 1981 and was in a coma and on a life support machine . He takes a lot of sedatives nowadays , but refuses assistance when dressing etc , preferring to do it himself . Kirkpatrick is saying that Tumelty was involved in making up a bomb .

In February 1974 , the Dutch Justice Minister ordered a stop to the surveillance , then British newspapers alleged that James McCann was smuggling drugs to buy arms for the IRA ; McCann denied any involvement and , whilst in Dublin , gave an interview to the 'Sunday Independent' newspaper in which he detailed several British intelligence operations .

He described a special joint unit of police , MI6 , special branch and customs officers , set up to combat arms smuggling and named the building , Tintagel House by the River Thames , where it was based and named the senior customs officer posted there . He also named a West German diplomat co-ordinating intelligence against the IRA in Dublin and also said British intelligence was using 'front' companies for arms deals to see who used them.

British Customs were appalled at those disclosures . The named officer was sent immediately on 'special leave' to get him out of the way . The intriguing possibility is that Howard Marks gave James McCann that information.......
(MORE LATER).

What reaction has there been from Leinster House to this spiralling drug addiction and despair ? Where has its elected members been , its agencies , the State gardai , RTE , the various Youth Councils ? The straightforward answer is that until very recently there was no reaction whatever from the State and its institutions .

Even so , when the Free State administration's 'Task Force on Drug Abuse', which was established in 1983 , issued its report in September 1983 , it was universally condemned by all those involved with young people and by those active in the campaign against drug pushers .

In essence , while it waffled on about setting up more committees , sponsoring a degree course in the study of drug abuse and other largely irrelevant and half-hearted gestures , it almost totally failed to recommend the allocation of extra money and resources needed to combat the symptoms of the crisis , let alone to tackle the underlying causes.......
(MORE LATER). 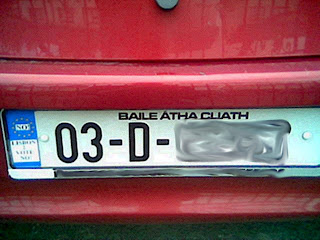 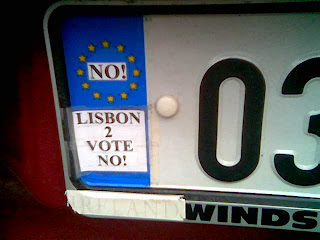 A reader of this blog spotted the above number plate ,on a car parked near O' Connell Street , in Dublin , and kindly sent it in to this blog : thanks ,Louise!
Incidentally , a tax imposed on 'imported vehicles' (whatever happened to the EU 'promise' that 'Europe' will be "one big market" ?) by politicians here in this State was actually deemed , in 2002 , by the EU , as "...illegal under the EU treaty..." who called for its abolition but , in typical 'cherry-picker' mode , the wealthy elite in Leinster House have ignored that instruction - because that illegal tax is worth approximately over €900million a year to them! And they 'need' it to maintain the lifestyles they have become accustomed to .

There is a huge amount of information on the EU and its various faults on these two '11 Sixty Nine And Counting…' posts - especially in the 'Comments' thread attached to each of those posts (thanks , 'Phoenix One UK' !) : "faults" , that is , for those of us that have to pay for the sheer extravagant waste that the Brussels Monster has become , and a waste that the political elite want to ensure will continue for their own financial gain, which is what the Lisbon Constitution/Treaty will guarantee .
We don't 'owe' them and we can't afford them - VOTE 'NO!' on 2nd October 2009.
Thanks!
Sharon.