A Republican ballad session will be held on Saturday 28 November 2009 in the 79'r pub in Ballyfermot , featuring 'The Dublin City Moochers' on stage.
Admission is €5 per person , doors open at 9pm and a raffle for Irish Republican items (framed prints , inscribed mirrors , bodhrons etc) will be held before the end of the night.
All Welcome !

Also,on a related topic ,a new Republican Flute Band has been formed in Dublin. Practice takes place on Wednesday evenings at 7pm. Phone 085-8242617 for further information.
Thanks!
Sharon.

When Kirkpatrick pleaded guilty to five killings , he got five life sentences. However , there was no minimum sentence imposed. Gerard Steenson got a minimum of twenty-five years for exactly the same 'crimes' !

In cases in the Occupied Six Counties where there is just one indictment for 'murder' , a minimum sentence is usually given ; Kirkpatrick got 'life' , which means that without any shortening of his sentence , he could be out within six years. Lawyers believe that Kirkpatrick will be moved to England , as he has requested, and from there to an open prison.

They believe he will be released long before his time and be given money and a start in a new life somewhere. There is a precedent in relation to the sentence being shortened - the 'Thomas McCormick' case.......
(MORE LATER).

It appears that the Emboffs open files on just about anybody who comes to their attention , and there is no doubt that this article you're reading will be inserted into the Mairin de Burca file , and that a file will be opened on the author of this piece . And on those who work for this magazine. And those who distribute it , and the shops that sell it , and on those who read it .

Tony Barry : "How did the patrols stop the drug addicts coming in to the area ? "

Noel Sillery : " At the start you had people coming in openly looking for drugs. And they would be approached and told that there was no heroin to be had in these flats anymore . With the presence of the patrols , outsiders didn't want to risk coming in and getting caught."
(MORE LATER).

(UPDATE: The next CDP/JI/CE-organised protest outside the Clondalkin office of John Curran will take place on Monday 30 November 2009.
Those attending will be meeting-up outside the County Council Offices in Clondalkin Village
(facing the Mill shopping centre) at 3.30pm and will make their way to Curran's constituency office for 4.00pm.
As usual , Republican Sinn Féin members will be taking part.
All Welcome!
Thanks,
Sharon. )

The protest today started at about 3.30pm outside the Clondalkin offices of the County Council , where around thirty protestors had gathered before making their way to John Curran's office in Clondalkin Village. Once there , they were joined by about twenty other protestors and on-lookers and a noisey picket was placed on the door into Curran's constituency office and a few metres either side of it. 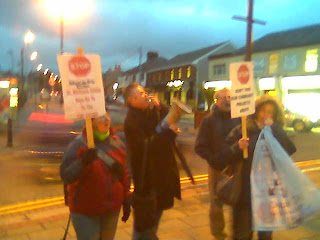 We made our presence known with the use of two battery-powered loud hailers , which drew massive support from passing motorists and cheers and claps from the passing public , most of whom stopped to hear the speakers and shout encouragement to us - however , we had received no answer to our request that John Curran should step out of his office and listen to our concerns , so we increased the noise level as best we could...

"Come out and meet your electorate , Mr Curran..."

...and it worked ! Local business man and Fianna Fail hopeful , Thyes M. Kavanagh, came out from Curran's office and told us that his boss would not be coming out to us but he would allow three of our number to enter the premises and express our concerns : three ladies promptly put down their placards and stepped in , with Kavanagh escorting them to the desk of his Master. Some forty minutes later , three exasperated women emerged , the worse for wear : they were told that the fate of CDP's etc is in the hands of an "Independent Review" committee (who appointed them and who pays them ?) and he told the delegation that , in his opinion, the proposed (/intended) cutbacks in the CDP/JI/CE programmes will not impact the operations of the work done by same to the level that the protestors are claiming it will ! This further enraged those present , and speeches , chants and whistles were again put to loud use , cars sounded their horns in support , passing schoolkids joined in as did shoppers and other members of the public. 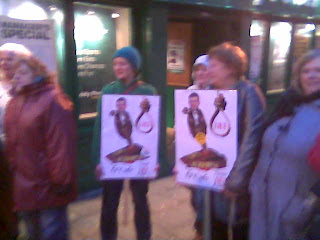 Finally , at 5.45pm , after receiving what we all recognised as a " Tough Shit..." answer from John Curran , we decided to end that days protest but we were all adamant and in agreement that another such protest and picket be held there within the next two weeks. Those that turned out today to try and save their jobs and to stop their communities being penalised by the Robber Barons represented by Curran and his like are to be commended and should be supported by all organisations that claim to have the interests of social justice at heart. For its part , Republican Sinn Féin will continue to stand with these workers , and is proud to do so !
Thanks!
Sharon.