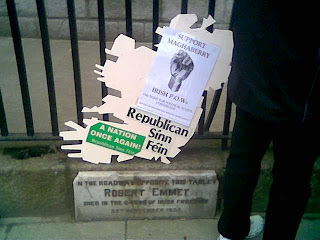 
During two hours today (11.45AM - 1.45PM) ,in Dublin, between 20 and 30 Irish Republican supporters held a picket in support of Irish Republican prisoners. The supporters stood outside St Catherine's Church in Thomas Street with banners , placards and leaflets.
Approximately two thousand leaflets were distributed - a good few of which were requested by tourists from Sweden , Denmark and the United States , to name but some places - with the bulk of the leaflets being handed to locals and to cars , vans , lorries etc , which slowed down to get a better view of the picket. 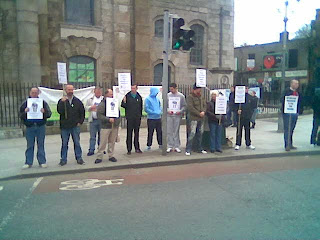 Some of the Republican supporters on Thomas Street , Dublin , today.

Amidst the thousands of people that were in the area over the two hours which the picket lasted for - and who were , for the most part , willing to take leaflets and talk to the Republican supporters present - only six males (as opposed to 'men')verbally objected : four operatives from the State 'Special Branch' and two uniformed gardai , all of whom harrassed the Republicans and , at one stage, tried to move them off the wide footpath where they were. With no success. 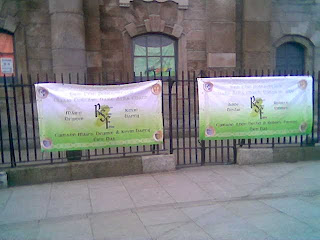 Two of the RSF banners on display at the POW picket. 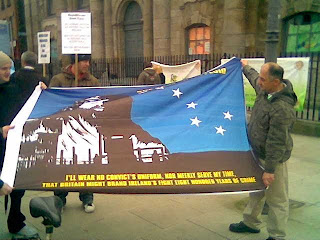 Five different leaflets were distributed at the picket , numbering about two thousand leaflets in total - a POW leaflet , outlining the issues facing our prisoners, a Dublin Easter Commemoration leaflet , a leaflet advertising a hunger-striker function on May 8th next , an RSF recruitment leaflet and a Na Fianna Éireann recruitment leaflet. As stated , the leaflets were very well-received by almost all in the vicinity ! 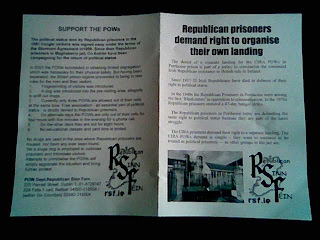 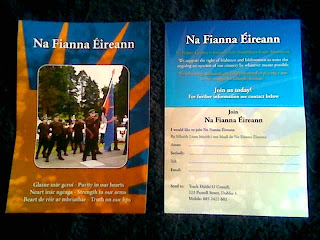 Na Fianna Éireann recruitment leaflets (incidentally , if you would like to know more about NFÉ , or become a member, you can 'phone one of the Organisers on 085-2422602). 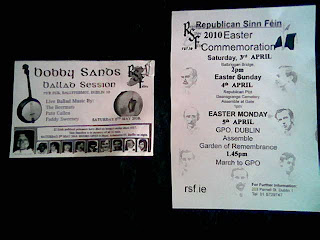 It was two hours well spent in Dublin's Thomas Street today ; the on-going suffering of our POW's was highlighted and brought home to thousands of people who otherwise might not have given the issue a second thought. The Organisers are to be congratulated on a job well done!
Thanks!
Sharon.

" And yet , on the international scene, there have been some positive developments and hopeful signs over the past year. The demise of 'Reaganism' renders the wounded Thatcher regime weaker than it has been at any time in the past decade. Thatcherite economics have failed even in the case of the well-heeled pockets of privilege and segments of greed which the Tory marketing people have targetted in order to maintain power on the minority vote that can achieve office under the illiberal , unjust and undemocratic system of elections that prevails in Britain.

The price, inevitably , is being paid by the poorer sections of the British public itself including many Irish people from all parts of this island who have been denied a job and decent standards of living in their own country by the overall domination of neo-colonial consumerist economics.

On the Eastern front of the world power-blocs there have been even more dramatic developments . We welcome the triumph of the Solidarity ideal in Poland with the same sense of enthusiam that we condemn the suppression of the quest by China's youth to push forward towards reform and real democracy , 40 years after the establishment of the 'People's Republic' in that huge country......."
(MORE LATER).

John Corcoran never made it to the works quiz. He never made it home. It was totally out of character for the 45-year-old warehouse manager. That night , his wife waited for his return. She remembers drifting in and out of a fitful sleep and hearing a disembodied voice in a dream warning her that 'life is all an illusion' .

She awoke at 6.30 a.m. on Wednesday morning , 20th March 1985 , to find that John had still not returned home. She was to spend the next three days searching the city for him with neighbours and friends. Her first concern was to shield her eight children , ranging in age from 16 years to six months, from the trauma. She did not contact the gardaí . John was an epileptic , and she thought he might have suffered a fit and had an accident. But she had other reasons for not contacting them , too.

She knew John was involved in the IRA . Although he was a low-level activist , his involvement had always been a bone of contention between them . She wanted nothing to do with the IRA , and when the couple got married they reached an agreement ; he would not discuss or expose their children , if they had children, to that side of his life. By Friday , 22nd March 1985 , Eileen Corcoran was panicking. Eventually , she went to the gardaí and reported her husband missing . She also rang the newspapers to make a public appeal for his whereabouts.......
(MORE LATER).

Matt Merrigan, Irish district secretary of the second largest union - the ATGWU - of which the late Bobby Sands MP, was a member , has appeared on numerous platforms since 1979 in support of the prisoners.

Other notable trade union supporters include Philip Flynn of the LGPSU, Seamus De Paor, general secretary of the Irish Post Office Engineering Union, which is the largest and most militant blue-collar union in the twenty-six counties' civil service , and Seán Redmond, general secretary of the Marine , Port and General Workers' Union, the largest dockers' union in the twenty-six counties . Also , dozens of other members of trade union national executives , local branch officials and hundreds of shop stewards and union section representatives have showed their support as well .

All of this initial support was built on to the stage where , presently, the annual conference of the following unions have unanimously adopted positions of sympathy towards the republican prisoners : LGPSU , ITGWU , MPGWU and IPOEU . Plus , the majority of branches of other unions have endorsed the prisoners' demands.......
(MORE LATER).