A tattered 'Union Jack' on the ground , before being stomped on.

Between the hours of 12.30pm and 2.15pm , approximately forty Irish Republicans held a well-received picket directly outside the British Embassy in Dublin today , Saturday 24th April 2010. The usual 'Special Branch' (political police) harassment was received , with eight of their uniformed colleagues staying , for the most part, in the background ie between the protestors and the Embassy entrance.
For almost two hours, the Republicans received a warm welcome from drivers who slowed down to look at the scene , sounding their car horns in support.


The Irish Tricolour on display outside the British Embassy.


The POW's in Maghaberry are being locked-up in their cells for 23 hours each day, meaning that they are expected to receive visits , shower , exercise and eat their meals (only served after the food has been out of the kitchen for an hour-and-a-half) during the one hour each day that they are allowed out of their cell. Medical facilities are such that there may as well not be any, they are not allowed free association , have no access to education programmes , are forced to watch and listen as their visitors are set-upon by the prison 'drug-dogs' and then listen, again, as their visitors tell them that British Crown Force members are following them home and practically camping outside their houses.


At the security entrance of the British Embassy, Dublin.


It was announced today at the picket , by a member of the RSF POW Department, that on the afternoon of Friday next , 30th April 2010, Republican prisoners in Portlaoise Prison will begin a 48-hour fast in support of their comrades in Maghaberry : more on this later , as the details become known...


Also, the injustice done to Lurgan , County Armagh man , Martin Corey, was mentioned by another representative of the POW Department : Martin was arrested on April 16th last and sent to Maghaberry Jail - he had served 19 years of a British-imposed 25-year sentence before being released in 1992. He did not sign any licensing agreement with the British in order to gain his freedom, and it was correctly stated at the picket today that his reincarceration is actually internment - that he is now a political hostage in his own country!


Some of the Republican protestors at the POW picket today , at the British Embassy in Dublin. 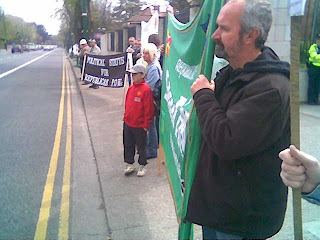 Finally : those present were reminded that a bus will leave from Aston Quay in Dublin at 8.30am tomorrow morning (Sunday 25th April 2010) for those travelling to the POW picket at Maghaberry Jail : the return fare is five euro per person. The organisers and those who took part in the picket today are to be commended for a job well done ; for speaking-up for those who, because of their Republican beliefs , are unable to speak-up for themselves. Well done!
Thanks for reading!
Sharon.

" In this overall context, the inevitable stampede without real discussion towards "1992" in the EC has already thrown up major issues and contradictions. The bubble of "massive structural funding" has already been burst, while at the same time the reluctance of the Dublin administration to grant even a fraction of the inadequate action to anybody other than the unelected officials of Merrion Street puts paid for once and for all to Fianna Fail claims about a genuine interest in decentralisation.

Even the EC economic experts themselves are now stating publicly that "1992" is no solution for our economic ills. It is going to be tough all the way up to that year - with unemployment, asset stripping , take-overs, emigration and stagnation in most sectors being as bad as we predicted they would be in the 1970's and '80s when we tried to warn people about the snare of EC membership.

Even the latest NESC Report had to admit that the substantial part of the Raymond Crotty scenario on the Common Market was correct. Mr Crotty's case was and is our case also. Yet there is very little debate about this in the Irish media. Politicians are scared stiff to conduct debate on the so-called 'National Plan' , to such an extent that the NESC Report itself is difficult to get in shops and lirraries. Leinster House ostrich-like chooses to ignore the facts and continues to parrot the declining list of 'benefits' which they claim 1992 will bring......."
(MORE LATER).

" I filled up. I felt desperate, " Eileen Corcoran said. "I felt there was only one way out of there and that was in a box. So I was saying to myself how, after all these years of telling me he couldn't get out, does he suddenly say he's semi-retired?"

Looking back at the weeks leading up to her husband's murder * , she remembers other things : she remembers watching him lie awake one night, unable to sleep, clearly troubled by something. When she asked what was bothering him, he didn't answer. She remembers another night when the house alarm went off and John refused to get out of bed to investigate the incident. "You could be murdered out there," he said. She could sense he was very scared.

Then there was the mystery caller , the man who would phone at any hour and demand to speak to John. This man phoned several times during the days in March when John went missing and was anxious to find out where he was. " I have no face for this man. He was just a voice to me. Over the months and years (that he had been phoning) he was a man I wouldn't have liked. He was aggressive. When he wanted John , he wanted John , even if it was an awkward time. He was a demanding man......."
(MORE LATER).

Because of the massive unemployment in Ireland and because the other eight deaths , after Bobby Sands and Francis Hughes, were not as 'shocking' - though of course people were moved and angry nonetheless - industrial action, although still widespread, has been more on the scale of one-hour stoppages at the time of the funerals.

Some sections of workers merit special thanks for their support ; these are the Belfast dockers and De Lorean workers , the Shortt factory workers of Derry, the Dublin building workers, Waterford Glass workers and the 3,500 construction workers at Aughinish - the largest construction site in Ireland , on the Shannon river estuary - who have taken strike action to mark the loss of each of the hunger-strikers.

Evidence of the consistent support enjoyed by the prisoners among trade unionists came in the recent Southern general election and the Fermanagh/South Tyrone by-election brought about by the death of Bobby Sands .......
(MORE LATER).