The routine for a test for a company might go something like this : a case arrives from the drug company containing the complete range of doses for each volunteer for the entire trial. Each individual would be marked out from start to finish , and the doses would have been made up by the drug companies in many cases. The protocol would also come with the drugs , and it would set out the rationale for the test , why it is being done at all and a description of the drug.

It would set out how the 'subjects' should be selected and what sort of people should be excluded by virture of age or gender. The design of the study is also indicated : whether it is 'single' or 'double-blind' ie a 'single blind test' is where the volunteer does not know what he/she is being given but the doctor does and a 'double-blind test' is where neither of them know what is being administered !

The protocol also deals with the assessments to be made , how adverse effects are to be dealth with, and whether the samples taken will be analysed by the clinic or the company. At the end of the protocol , there is the name and telephone number (day and night) of a doctor , usually in the country of origin of the drug , to be contacted in case anything goes wrong. Sometimes , in the case of 'double-blind tests' , there is a sealed code accompanying the drugs in case of an emergency.......
(MORE LATER).

" On this account I got an encyclopaedic knowledge of subversive elements and the process of writing and re-writing in preparation for the printed volumes imprinted in my memory a great deal of information which was to prove very useful to ministers in the course of Dail debates and so on.

In 1938 I became Private Secretary to the Minister , Mr Ruttledge and , in September 1939 , to his successor , Mr Gerald Boland. In June 1940 , the minister signed warrants for the detention of 500 alleged members of the IRA and an 'Intelligence Division' , consisting of a Principal Officer and a Higher Executive Officer - formerly Mr Ruttledge's private secretary - was established to advise the minister and to sift the value of police recommendations. Mr Boland had a very healthy question mark placed over every recommendation for a detention order and he was not satisfied to keep a person in detention without trial on police recommendations alone *.

In the next eight months he became increasingly dis-satisfied with the lack of independence from the police of the Departmental advice and he insisted on a change of personnel. On the Secretary's advice the minister assigned me to the job and I had daily , sometimes hourly , contact with the minister during the 'War Years' and attended him in the Dail debates on political matters and when he was receiving deputations. I signed all correspondence in connection with matters such as parole and came to be recognised in political circles as the minister's 'eminence grise'.

When things got slack I carried on with my research with a result that a second printed volume was produced for the years 1941/47 to supplement the volume for the years ending in 1940 in relation to the IRA. I also produced a dossier in manuscript form in relation to communist activities for the same period . The period 1948/51 of a coalition government , the period 51/54 of Fianna Fail and another period of 54/57 of coalition government were quiet years , politically , but on 12th December 1956 the Border Campaign erupted and it was to continue until February 1962......"

(* '1169...' Comment - that opinion would not be, to put it mildly, shared by Irish Republicans , as Boland and his colleagues in Fianna Fail were (and are) of the one mind as to a 'solution' to British interference in Irish affairs ie brand those who oppose it as as 'criminals' , give them a 'trial' in front of a State Military Court and then intern and/or execute them.)
(MORE LATER). 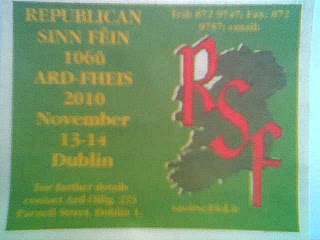 SINGING AND SHOUTING AND GAMBLING....

To get the vocal chords in good working order (!) for the up-coming RSF Ard Fheis , a ballad session will be held in the 79'r Pub on Saturday 16th October 2010.
The ever-reliable and very popular Paddy Sweeney has been booked , and various friends of his - and he has a lot of them ! - will be helping him out and filling-in for him when he goes for a 'cup of tea'......
The doors open for this event at 9pm , admission is a fiver per person and the usual raffle will be held.
ALL WELCOME!

On the above dates , in a Dublin venue, the Republican Movement will hold its 106th Ard Fheis at which various motions - in this vein - will be discussed. A brief report and a few pics from last years Ard Fheis can be viewed here.
Members of this blog have been given a 'Visitors Pass' and , if we're not working elsewhere on that weekend (see below) , we will write-up a brief report on same for this blog.
However - either way - we congratulate the RSF leadership , its members and its supporters on actually surviving to this point , as we have first-hand experience of the many ways in which the Administration of this corrupt State constantly attempt to put that political organisation out of business. But whilst Westminster continues to claim jurisdictional control over any part of Ireland , Irish Republicans will continue to oppose them and their illegal , immoral and unwanted 'claim'.
RSF ABÚ!

Also on that same Sunday (14th November 2010) , in a different venue , RSF will be holding a raffle for which more than 600 tickets will have been sold and at which over €400 will be handed-out , there and then , in prize money.
It's a testament to the commitment of RSF that it can manage to hold two such major events on the same weekend - each of which demands that dedicated 'crews' be assigned to each such event if same is to be held in a correct and successful manner - whilst those who have placed themselves 'outside the fold' scream loud and shrill of how that organisation is 'too weak to survive etc ' .
Those 'screamers' invest more time and energy in trying to cause damage to RSF than they do in battling Westminster or in challenging the corrupt regime in Leinster House and , as such - to put it mildly - their objectives must be questioned.
Thanks for reading !
Sharon.