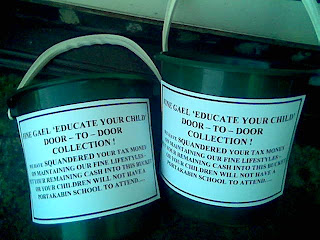 GIVE GENEROUSLY - OR ELSE YOUR KIDS WILL BE FORCED TO EMIGRATE WITHOUT AN EDUCATION.....


We all know by now that those in Leinster House have been living beyond our means.
This is because our means are not sufficient to keep them in the style they deserve. Yes , readers - it's our fault. The up-coming State budget will ensure that most of us (but not all of us) will have less money available to maintain the lifestyles of our professional career politicians : with this worrying development in mind , we at this blog feel it's time to offer-up one possible solution , first mooted by those that have our best interests at heart - Fine Gael.

One of our Fine Gael leaders-in-waiting , Therese Ridge , a State Senator amongst other fine attributes ,
first suggested this worthy approach in ensuring that the money stopped from your wagepacket each week should not be wasted on health or education initiatives to the point that there will not be enough left over to maintain the lifestyles of our professional career State politicians. The suggestion from the lovely Senator also ensured that the unemployed could contribute as well as they , too , have hall doors (...even if , like the employed , they can't really afford those hall doors..) 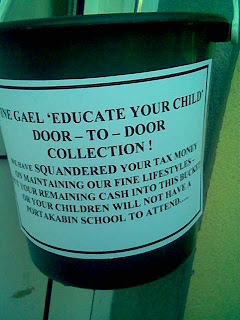 For the good of our politicians , we MUST fill buckets like these...

Foolproof!
We wrote about this brave and sensible proposal before and , indeed - to the credit of some of our readers - we received a few messages of 'support' (!) and, as such , we feel it is time to resurrect this noble idea and to campaign for it to be included in the up-coming State budget initiatives.
However , we realise that there are begrudgers out there who won't be happy until the Therese Ridges's of our taxpayer-funded gated communities are down in the gutter where they are , and to those small-minded individuals we have this message : would ye ever go and feck off with yourselves!
Those begrudgers have no idea of the strain our leaders are under and we ask that our readers ignore people like that , put the 'Welcome!' mat out on the doorstep and boil-up the kettle.
It's the least you owe Therese and the hundreds of others like her , that are simply trying to ensure - at your expense , naturally - that they remain insulated from the troubling , 'penny-pinching' and worrying day-to-day financial difficulties that you and I endure.
Dig DEEP , won't you.......?

The Institute of Clinical Pharmachology in Dublin has about 1,000 volunteers a year , most of whom are male : even though Irish women have the highest incidence of cardio vascular disease in Europe, these drugs are not tested on females.

Volunteers are paid a standard £20 a day for their service , which works out at about 83p an hour. Grants to the Clinic of up to 50% are available from the IDA if the drug under test is to be manufactured here.

In the 1970's , the Institute was known as a place where students could go if they wanted some 'handy' money. Predominantly , volunteers were students taking time out to collect money for fees or rent etc but , towards the end of the decade, things began to change : the prevailing economic conditions left more and more people without work , without money , and unemployed Dubliners took 'advantage' of the £20 a day on offer from the Institute , as a single unemployed person gets about £30 a week on the dole.

" From February 1948 , on the change of government, until March 1957 when Fianna Fail took over again , I retained custody of the confidential papers although I was in higher ranks and dealing with broader Departmental matters : it suited everybody , in particular the new Secretary and Assistant Secretary , to have somebody around who could reel off facts and figures or turn up precedents from memory.

During the Border Campaign of 1956/1962, I was one of a team of three - the others being the Attorney General ,Andrias O Caoimh, and the Legal Adviser of the Department of External Affairs - who prepared the case against Lawless which came before the Human Rights Commission and the International Court of Justice at Strasbourg. I attended the hearings , with my job being to make up the dossier of facts to deal with the legal aspects.

Again the writing and re-writing of the history of IRA activities to justify the government's use of the powers of detention without trial imprinted on my mind details which time has not erased. In the course of the Strasbourg hearings I got to know the Head of 'S Branch', Philip McMahon , very well, as he had been subpoenaed as a witness before the Commission of Human Rights and I formed a great respect for his integrity and knowledge of his subject : at the time he was being described in Tim Pat Coogan's book 'Ireland Since the Rising', as "...the nemesis of the IRA.." . And so he was......."
(MORE LATER).

At the time of writing , industrial unrest in France is on-going and , with a bit of luck, will spread from France to elsewhere - like here , in Ireland , for instance.
We Irish used to have that 'back-bone' - to take to the streets over injustices , to strike from our jobs when the bosses attempted to take back or reduce that which we had won by standing together , to riot in the streets when those same bosses - backed by a complient media and supported by the political establishment and the brute force of that establishment and silently (and sometimes not that silently) supported by a weak trade union leadership - attempted to increase their profits by "reducing their expenditure" ie by reducing the workforce and/or reducing the wage paid to each employee as well as by attempting to change whatever terms , conditions and work practices which that workforce had obtained to make their working life that bit more bearable.
That 'Spirit of Resistance' is still present , albeit not as prevalent or as widespread as it once was : people seem to be , for the most part , 'browbeaten' , subjuded by a combination of malignant forces that has left them scared to raise their head above the parapet.
We on this blog have helped place pickets on the offices of those politicians who have introduced and/or supported financial and social cutbacks on workers and the unemployed , we have protested at the presence of State politicians at a community function when the actions of those same politicians have devestated that same community and we have been on the streets protesting against the unreal and unfair 'bank bailouts' and , as trade union members ourselves, we are in full agreement with like-minded observers who point out that those in the leadership of the trade union movement - whilst promoted as 'radicals' by the establishment - are , in actual fact , the paid-for 'pet rebels' of that same State establishment.
And , whilst we fully intend to continue doing all of the above , it would make it all the more worthwhile to us if we could do so in the company of others that also had the 'Esprit of the French'. But we won't let the (temporary) absence of same deter us...!
Thanks!
Sharon. 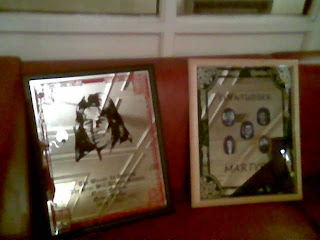 Two of the six raffle prizes won on the night.


Full marks to the lads and lassies from the Ballyfermot-based James Connolly/Frank Carroll/Denis O Donovan Cumann , Republican Sinn Féin , who organised this fund raiser : they know their stuff and run a 'tight ship' !
They managed to sell more than 400 tickets for the event , book three acts for the night - Paddy Sweeney , Pato Cullen and Willie Nolan - acquire six items for raffle prizes (two framed Republican mirrors , a Bodhrón , two books ['Between Comrades' and 'Women of Ireland'] and a framed 1916 Proclamation ) and accomodate a crew from Armagh who came down specially to see how to do it right ;-) (only joking, Cait !) !

A good-sized crowd , which almost filled the hall, was welcomed to the venue by Josephine Hayden, General Secretary of RSF , who dedicated the night to Kevin and Seán , and , to loud applause, spoke briefly of how important events like this are to the Movement , as they raise much-needed funds and help to 'get the word out' re the Republican position on the on-going struggle for full self-determination and on the Republican position regarding the financial crisis being experienced by workers and the unemployed due to the incompetence and greed of "...the expense-account time-servers in Leinster House.." .

Josephine also said a few words about the CABHAIR Christmas Swim , reminding the crowd that this soon-to-be 34-years 'young' event will be held on Christmas Day next at the 3rd Lough of the Grand Canal , about a mile in distance from the venue we were in now. Also , Josephine mentioned that the 79'r had been booked , again, for Friday 17th December next, for another ballad session - details to follow. And with that , she introduced the first act of the night - Pato Cullen - and another great night (and early morning!) in the 79'r got underway...

Finally : thanks to Frank , Robbie , Paddy and Matt for 'doing the door' , to Pat , Barney , Steve and Harold [;-)] for looking after the other entry/exit point , to Cait for doing the raffle (I didn't win anything and Cait can't hold her cider !) and to the manager and staff of the pub for looking after us so well. Much appreciated!
We publish with this brief report a few pics from the event : 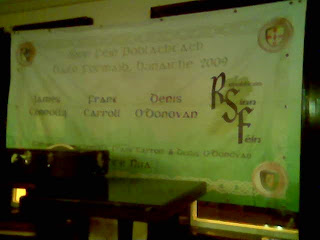 RSF Cumann banner used as stage backdrop on the night - incidentally , Denis O Donovan Jnr was present at this function. 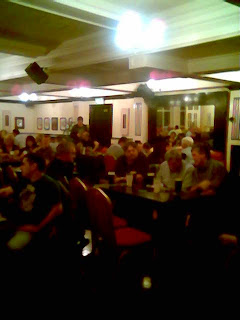 A section of the crowd. 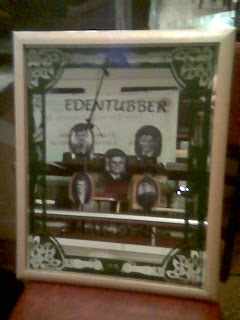 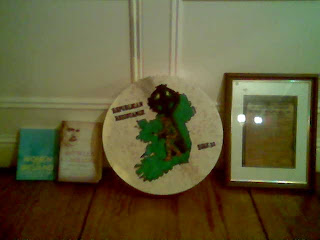 Four of the six raffle prizes won on the night. 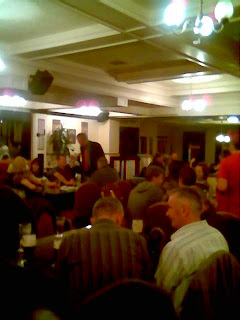 Another section of the crowd.