A seizure of €1.4 million worth of cigarettes from a lorry stopped outside Clara , County Offaly , three weeks ago, has also annoyed Customs : cigarette-smuggling is the preserve of the Revenue Commissioners , they say - according to customs officers , no intelligence information was passed on to Customs prior to the haul by the 'National Drugs Unit'.

Since the find, the cigarettes have been stored at a Garda Barracks in Tullamore , County Offaly, when Customs say they should have been immediately handed over to them : " There are lines in the sand and when they are crossed it inevitably creates tension. We are living in an era of glory-hunting but we should be working together , but egos and private agendas are preventing this , " says one customs officer , " Customs are supposedly the frontline defence in terms of drug enforcement, but we are constantly undermined by the gardai."

Another customs officer says he has come across one case already this year where a drug runner who was hauled in by Customs was found in possession of a phone number of a member of the 'National Drug Unit' - " When you ask the gardai they deny that they are the handlers. What can you do ? It's the whole Declan Griffin thing all over again, " he says.......
(MORE LATER).

" When I picked up the phone I recognised Mr Haughey's voice with which I was familiar. He said - "You know about the cargo that is coming into Dublin Airport on Sunday?" , to which I replied 'Yes. Minister'. "Can it be let through on a guarantee that it will go direct to the North?" I answered 'No' , to which Mr Haughey replied - "I think that is a bad decision." I made no comment , and he asked "Does the man from Mayo know?" to which I stated 'Yes' He asked "What will happen to it when it arrives?" and I replied 'It will be grabbed'.

"I had better have it called off " , he commented. I made cryptic notes there and then in my personal diary , and also made notes of a phone call immediately afterwards from Chief Superintendent Malone of C3 , Garda HQ. In the Department of Justice on Monday 20th April , I made expanded entries of these notes in a Departmental file and those notes were seen on that day by some of my senior colleagues.

Immediately after my conversation with Mr Haughey I had a call with Chief Superintendent Malone......."
(MORE LATER).

ALL LEGITIMATE CONSENT REQUIRES THE ABILITY TO WITHHOLD CONSENT....... 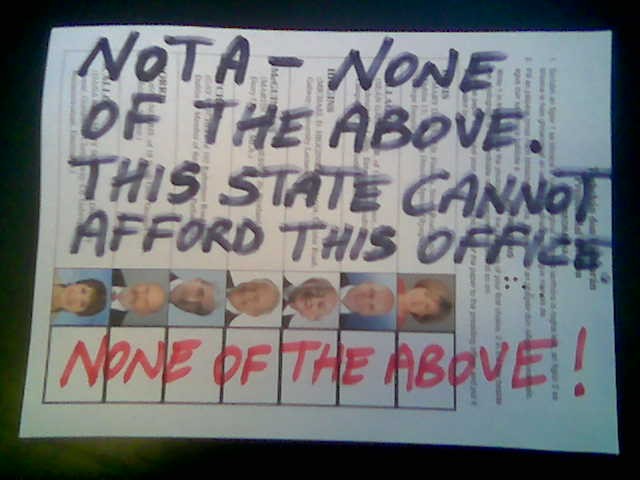 The smarter option -'None Of The Above!'


Those with an open mind in relation to casting a ballot may be interested in the following 'NOTA'-type positions that exist in other jurisdictions :
"None of the Above (NOTA) or against all is a ballot choice in some jurisdictions or organizations, placed so as to allow the voter to indicate his disapproval with all of the candidates in any voting system. It is based on the principle that all legitimate consent requires the ability to withhold consent, allowing voters to withhold their consent in an election to office, just as they can by voting no on ballot questions...."
(From here.)
I particularly like the term - '....all legitimate consent requires the ability to withhold consent..' ; unfortunately , the 'powers-that-be' in this corrupt State have long-since turned their back on 'legitimate consent'. 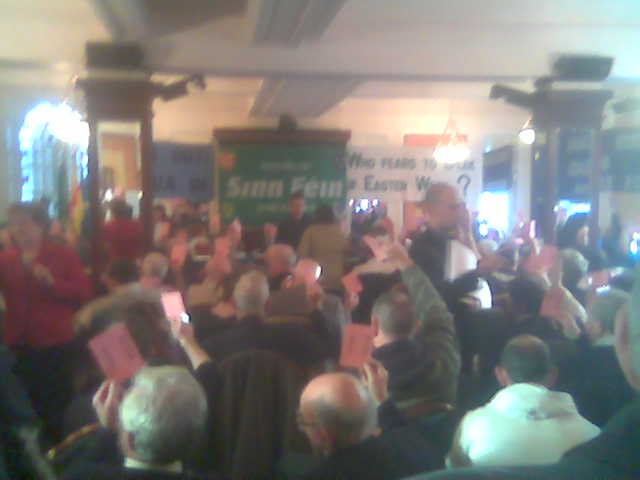 The Republican Movement will hold its 107th Ard Fheis on Saturday 12th and Sunday 13th November 2011 - at which 166 resolutions , from Ireland and abroad, will be debated - in a Dublin venue : whilst those behind this blog offer our congrats and 'Best Wishes' to Republican Sinn Féin , we won't be there : there is another 'RSF VIP' event being held elsewhere in Dublin on that same weekend (bad timing or wha'!) and we have been requested to give a hand with same - 'more later' , as they (we!) say.... !
Thanks for reading,
Sharon.