The 'Prime Time' TV programme was aired in July 2001 but became controversial for all the wrong reasons : 'Prime Time' decided to conceal the informant Keating's identity and his name was to be electronically 'blotted out' but it didn't work and he was in fact named several times during the programme. The cock-up became the story and RTE launched an internal investigation.

The Garda slammed the programme-makers , saying that "it was totally inappropriate for the programme to identify any individual who may or may not have been in contact with the Garda in relation to a controlled operation." The allegations were never aired again.

In relation to the programme itself , the Garda Press Office said that the force was involved in "controlled operations" in the Cork area a number of years ago which involved monitoring the movement of drugs into the State.......
(MORE LATER).

" In my room I phoned Dr. Nolan and explained the circumstances of the press release and then I went on to ask that the Government decision on the question of a 'native medal' be communicated to me formally so that I would know precisely what the Government had in mind. He said that he did not understand to what I was referring and when I explained he said that the Minister had not raised the matter at all. Stout Cortez never looked with such wild surmise, silent on the peaks of Darian as we, in my room, looked at one another. A gold medal was awarded posthumously to Garda Fallon a year later."

" I had a phone call from the Taoiseach - the first in some months - to say that he had been unable to contact Mr O Morain ; I replied that it was the Minister's practice to go to his constituency , Mayo, at each week end and that, this being Monday, he might not return to the office until this morning.

The Taoiseach said that I should come to Government Buildings that evening , that he wanted a run-down on the IRA situation vis-a-vis the North . Before I left to see the Taoiseach I learnt that the Minister had arrived , and I told him of the Taoiseach's phone call and said that I could not give a full picture without recounting the police information as to the involvement of Mr Haughey and Mr Blaney.

The Minister said : "Tell the Taoiseach whatever you feel and you should tell him " - he appeared to be in a very fatigued condition , as he muttered and was listless. I felt that he was scarcely conscious of what we were talking about....... "
(MORE LATER). 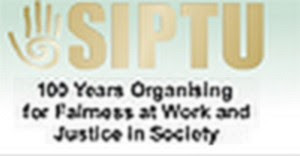 In the days following our recent piece on this subject , we were contacted by colleagues in Clondalkin JI and by a friend of ours in Liberty Hall - we have confirmed that a Clondalkin JI meeting was held last Wednesday night (14th September 2011) in the Neilstown area of Clondalkin , at which a SIPTU official was present. Angry and determined JI workers were "firm" in questioning him in relation to the LRC 'slip-up' (re case decision and appeal period) to which he gently replied that he doesn't know what happened in regards to that "communication error" as he is not the SIPTU official who was charged with processing the case (that person was "not available to attend the Clondalkin meeting..."!) and had no input whatsoever re the LRC case or 'slip-up'. He said that the SIPTU official involved had prepared "a report" on the matter , that it was to be studied by Branch officials that very day (Wednesday 14-9-11) and declared that same would be made known and available to Clondalkin JI 'as soon as possible'.
One week later and still no report : despite requests from Clondalkin to Liberty Hall for a copy of same or even, at least, an indictation of what it contains, the report - if , indeed, it exists at all - remains a mystery document as far as Clondalkin JI are concerned.
As if that wasn't enough on its own for these shabbily-treated workers to contend with ,FÁS announced in the last 48 hours that it had withdrawn the financial 'Top-Up' (which didn't exceed €20 a week) which it paid to a minority of JI workers within the State whom it deemed to be in extra need : again - as with imposed wage reductions - no consultation was entered into in relation to this matter.
Also within the last two days , the SIPTU-nominated JI worker in Clondalkin who was to take a seat , as a worker-representative, on the Board of the 'Clondalkin Partnership' group (which is 'in charge' of Clondalkin JI) withdrew from the position as it entailed 'working with SIPTU' , something she is not now prepared to do.
Due to its incompetence - or worse - SIPTU has worsened the already-poor position of these low-paid workers and has , as far as they are concerned , abandoned them to fend for themselves against the cruel dictat of an uncaring boss. And this from the Union with a social conscience.....
Thanks for reading,
Sharon. 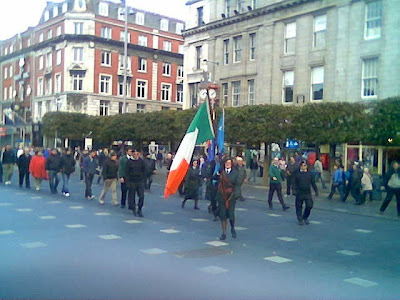 
The RSF-organised 'Eve of All-Ireland Rally' was held yesterday (Saturday 17th September 2011) in O'Connell Street , Dublin and, between the traffic isle on which it was held, and the footpaths on both sides of O'Connell Street , it was observed by about 200 people. Both uniformed and 'Special Branch' State operatives were 'on hand' but caused no trouble to or for the organisers , although the 'SB' men and women tried their best to deter the crowd from remaining in observation of the Republican proceedings but to no avail. They also made their presence known to the organisers and to the crowd after the event had finished , as usual.

The day began , as is usual for this event , at 12.30PM when a van dropped-off the small stage unit etc and the 'electrics' (amp , speakers , control-box etc) in O'Connell Street , where the six-person RSF crew was waiting :the gear was then assembled on the traffic isle facing the GPO following which a three-person 'crew' was left to keep an eye on same whilst other RSF members and supporters made their way up O'Connell Street to the assembly point outside the Garden of Remembrance from where , at 2PM , a contingent of Irish Republicans, led by a Piper , Cumann na mBan representatives and an RSF Colour Party , made their way , marching down O'Connell Street , to the GPO.

The proceedings were Chaired by Andy Connolly , Dublin, who, in the course of his introductory speech , highlighted the fact that, although this was an 'Eve of All-Ireland' Rally , Republicans remain conscious of the fact that a British-imposed partition means that this is not , yet , an 'All-Ireland' Ireland , an injustice which Republican Sinn Féin is working to correct. The two main speeches were delivered by Róisín Hayden and Geraldine McNamara and , on command, the Flags were dipped in memory of all those who have given their lives to obtain that objective. The Rally was brought to an end after Séan , the Piper, played the National Anthem.
Both speeches , and more photographs , will be published in the October 2011 issue of 'Saoirse' , which goes to print on Wednesday 5th of that month : meanwhile , we post a few pics we managed to round-up and, if you are signed-in to 'Facebook' , there are more on view here. 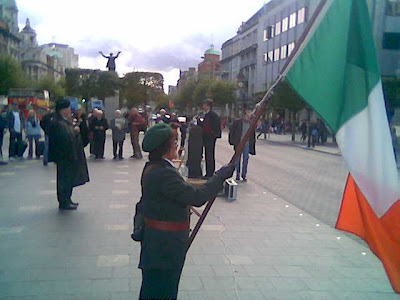 A Cumann na mBan rep at the 'Eve Rally' , Dublin. 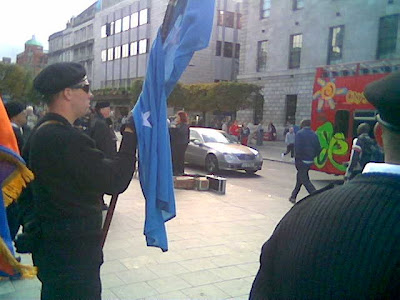 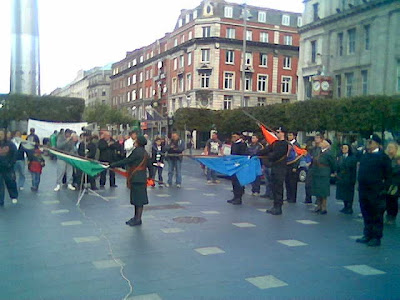 Cumann na mBan and an RSF Colour Party at the Rally. 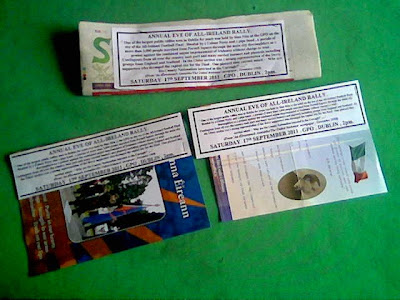 Over 750 in total of the above three types of leaflets were distributed at the Dublin 'Eve Rally' on Saturday 17-9-11 , mostly to American and Italian tourists - and Kerry people !