They could not even let on not to know the road they took , for the British spared them no humiliation on that : 'Steps shall be taken , ' the Treaty declared, 'for summoning a meeting of members of parliament elected for the constituencies of Southern Ireland since the passing of the Government of Ireland Act 1920.......this instrument (the Treaty) shall be submitted....to a meeting....of members elected to sit in the House of Commons of Southern Ireland...'

It was all so unlike them , so unworthy of them, that one felt ashamed for them , and because of them , for all of us : they , justifying themselves to themselves by their motives , while embarrassed and humiliated by the reality , were equally bad tempered. In face of the news from outside, and in response to questions and discussions on the rapidly worsening political and military situation , Liam Mellows wrote his 'Notes From Mountjoy Jail' which fell into the hands of the Treatyite forces and was published under scare , and of course Communist, headlines. The document was addressed to the leaders of the Republican Army on a plan to rally the people for the better defence of the Republic.

It advocated , as a first step, that a provisional government be set up, and that the Democratic Programme adopted by Dáil Éireann in January 1919 be put into effect : estates and ranches in the hands of those who stood for the British connection to be seized and distributed , and Mellows reminded the leaders on the outside that a plan towards this end had already been drawn up by the IRA Executive - it was written by Paddy Ruttledge , a member of the IRA Executive , later Minister for Justice in De Valera's government , and I very much doubt whether a copy of it is still in existence......
(MORE LATER).

" While the Taoiseach , in his winding-up speech on May 9th , made reference to me as having 'acted most efficiently and conscientiously' , he made no reference to the circumstances in which I was directed to report to him ; furthermore , he made no effort to dispel the nonsense that I was employing "a super-Special Branch" to spy on Ministers.

Although he had full knowledge of the Ministerial appointment of a consultative assistant to the 'S Branch' Head in 1966 , and in continuing years , he made an evasion of personal responsibility ; " I want to say before I proceed that I did not at any time have Ministers' homes watched during this investigation.....there was no attempt whatever at imposing Gestapo methods on any member of the Government , certainly none that I directed and none so far as I could ascertain."

MAY 14 , 1970 :
" The Taoiseach answered questions in relation to security measures : Deputy O' Leary asked - 'Is it a fact that a member of the Cabinet was aware of the complicity of other members of the Cabinet some months before the Taoiseach ?' , to which the Taoiseach replied : ' I do not believe that the Ministers to whom the Secret Service would report would have possession of such information months before....' "
(MORE LATER). Apologises for the later-than-usual posting time , but our 'legal department' got extra nervous on discovering that a high-powered PSF* team ( * 'P' for 'Paper' Sinn Féin , as they never refuse ink...) are searching the blogosphere with a view to taking legal action later on for any 'untoward comment' in relation to Aengus : indeed , that team of sleuths are believed to be printing that material out now as you read this....

Aengus Ó Snodaigh , a Provisional Sinn Féin member of Leinster House, Elvis impersonator* and mountain climber* (!) (*see pics, below...) has been discovered to have been in receipt of over €55,000 worth of printer cartridges - 434 units in total at a cost of €130 per unit , an average of 3 cartridges a day ; more than enough , overall , to print more than 3 million letters - in the last two years : indeed, in one year, when his 'job' was not-unusually only 'open for business' for 96 days in a twelve month period , the bould Aengus took 219 printer cartridges !

And , as if abusing taxpayers money for the above wasn't bad enough , the same man , who is paid a salary from the taxpayer of over €1930 a week (not including 'legitimate expenses'!) also removed enough quantities of copy paper (A4 etc) to use with the cartridges , adding tens of thousands of Euro onto the total value of the 'haul': interviewed on 'Newstalk 106' radio yesterday , Aengus defended his actions , stating that all his leaflets and printed material was in full colour , with pictures , solely for the benefit of his constituents , to whom he and his team delivered same to "once or twice a month , maybe more.." - the Fianna Fáil leader , Micheal Martin , asked , on that same radio station : "What is it with ex-revolutionaries in this country that they seem to have a love affair with printing machines ?" !

It then transpired that the Provisional Sinn Féin 'Press Office' in Leinster House 'used' 86 ink cartridges in one year , compared with all the other party 'Press Offices' combined which, between them , used a total of 54 cartridges. It should be noted that , at the time of writing this blog post , the last 'official' press release from Aengus to his constituents was one year and twenty days ago..... 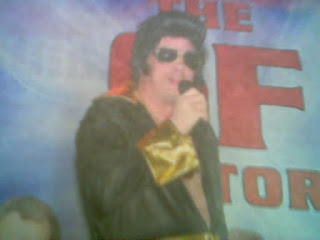 - this , believe it or not , is Aengus 'Elvis' Ó Snodaigh , captured a few years ago at a charity fund-raising night. Bet he's all shook up now, uh huh huh..... 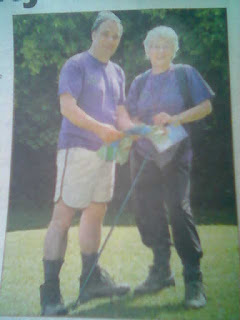 ....and this is the same 'public representative' , presenting coloured leaflets to a fellow mountain climber. Is it all down hill from now , one wonders.....!

Finally : it looks like we may be returning to this subject , as it now transpires that Aengus's leader in Leinster House , Crown Steward and Bailiff of the Manor of Northstead , Gerry Adams , is the second-highest user of ink cartridges in Leinster House.....
.....and please note : no ink cartridges were used ,abused or mis-used in the production of this Post !
Thanks for reading,
Sharon.