MAYBE NOT THE WORST , BUT DEFINITELY IN A BAD PLACE.....

I escaped from prison in March 1924 and made my way to Donegal , where I took shelter for a few weeks in mountain townlands. I often walked alone in the shadow of the hills and it was then that the sense of gloom and doom in my novel , Adrigoole , entered my mind : it disturbed me to recall how often I had billeted a considerable number of men on these homes in the Black and Tan days but I was more aware now of the weakness of this economy - my eyes were sharper.

I noticed how the heather ate its way into land that had fallen into feeble hands and it saddened me that mountains should renew their grip on fields that had been won from them by desperate , hopeful men.

We talked of many things by the firesides at night : one day the people would have to face the arrears of land annuity , but the bailiff was not yet at the gable , and Republicans would be in no hurry to go in and make their peace. Free Staters would go in at the first word of warning from their government , for they wouldn't want their Republican neighbours to make a mock of them for fighting their way back , not only into the Empire , but under landlordism as well. It never once occurred to me that the people had any choice but take on the burden of arrears as part of the price of defeat.......

(*The battle is not over yet : Republicans and , indeed , Irish Republicanism , may be 'down' [at a low ebb] but we have been here before....)

THE PETER BERRY PAPERS....... The Top Secret Memoirs of Ireland's Most Powerful Civil Servant : Dirty Tricks, Election '69/ Spying on a Unionist Politician/ Keeping the (State) Taoiseach informed/ The Garda Fallon Murder/ Advice to Jack Lynch- 'Fire the pair of them...'/ Vivion De Valera's advice to O'Malley/ Rumours of a Coup D'Etat/ The Internment Plot, November 1970/ Secret Meeting with William Craig. From 'MAGILL' magazine , June 1980.
"The Taoiseach mentioned why the available members of the Cabinet had been summoned to Dublin , at the joint request, apparently , of the Minister for Justice and the Minister for Defence , and said we will start the questioning with Mr. Berry. He proceeded to do so and I gave the result of my enquiries that morning , that nothing unusual was happening and nothing was in the pipeline. When their turn came the Chief of Staff and the Commissioner had nothing to add.

We left without being given any clear idea of what had precipitated the meeting - the possibility of a 'coup' had been vaguely referred to - but it became apparent in following days that the two inexperienced , newly appointed security Ministers had added two and two to some information that they had been fed and had come up with a sum of five. The warning that I had been given on his appointment in May as to Mr. O' Malley's impulsiveness flew danger signals in my mind and I was to have further causes of uneasiness on that score within a matter of days."


JULY 7TH 1970:
"A picket of eleven persons , the leaders of which were Mairin de Burca and Seán Kenny , Secretaries of Official Sinn Féin, paraded outside my home with placards some of which read - 'Peter Berry Beria in Disguise' and 'Twentieth Century Felon Setter....' etc......."
(MORE LATER).
ON THE ONE ROAD.......BUT GOING TO TWO SEPARATE DESTINATIONS !

The CABHAIR group and Republican Sinn Féin are two of the separate organisations that are 'housed' within the one Movement which operates from a premises in Dublin's Parnell Street - number 223 - and , as per usual within any 'family' , when 'outings' etc are being organised , discussions re same are held first to ensure that there is no 'crossover' or clashes but , occasionally , these do happen.

This coming Sunday (10th June 2012) is one such occasion : months ago , the CABHAIR group organised that one of its '6-a-year' fundraising events will be held on Sunday 10th June in a venue which is sometimes used by RSF for its own activities - a hotel on the Dublin/Kildare border which , by pure coincidence, is practically within shouting (!) distance of the area where RSF members and supporters will be on that same Sunday - the small town of Sallins , in County Kildare.

At about 2pm on that Sunday , six people (and a good few supporters) appointed by CABHAIR , will be in the above-mentioned hotel to hold a 650-ticket raffle and , at €2 a ticket - all of which have been sold - it's an event which the organisers felt they should not postpone or interfere with in any way , as funds are always required for the families of our imprisoned political colleagues. Some within the CABHAIR Committee and its supporters body are a wee bit miffed that RSF , an organisation on friendly terms with it , should be so careless (!) as to hold an event on that same day , at the same time and in such close proximity to its event but neither group could or would 'give way' - with the result that two Irish Republican events will be held that same Sunday within spittin' distance of each other : the CABHAIR fund-raising raffle and the RSF-organised Wolfe Tone Commemoration at Bodenstown , near Sallins , in County Kildare.

Some of those attending the Commemoration will have been sold tickets by the raffle committee and/or its supporters and , when the Bodenstown event finishes that day , they intend to drop-in to the 'raffle hotel' some of whom , with a bit of luck, will collect a few bob prize money and all of whom will be looking for a pot of tea (!) and a bite to eat : it's when the 'tea' is finished and a different (??!) liquid starts to flow that the real entertainment will begin....

We will post the names of the winners , the amounts they won and the winning ticket numbers on this page on Sunday (or... HIC !......Monday) but the 'entertainment'-end of the get-together will never be mentioned by us. Unless , that is , we're short of a blog post sometime in the near future..... !
A 'GOOD APPLE' IN A BASKET OF ROTTEN ONES......

Those of us behind this blog have , over the years, met a good few members and ex-members of the Leinster House institution , mostly when protesting about one of the many idiotic proposals they support but Mick Wallace is a member of that institution that some would have considered to be a wee bit more 'grounded' in his approach to political issues - someone who , if you like, who would be more in touch with 'common issues' than other Leinster House members (the late Tony Gregory would have fitted into that category as well) and , whilst we have no quarrel with an 'ordinary Joe Soap' attempting to 'remove from Caesar that which Caesar declares to be his' , we have a problem when a millionaire property developer attempts to do it , regardless of how well 'grounded' he or she actually is or professes to be.
We know from having met Mick at various protests that his 'heart' is generally in the right place but, even so , we're happy that we don't work for him. However , Leinster House is the wrong venue for a man like Mick to associate in , as it's so stuffed to its rafters with unprincipled chancers and those of the morally-criminal class that fleas from them were bound to land on him. Which , unfortunately , they have. He genuinely did , we think, enter that kip in Kildare Street in the hope of effecting some change in the manner which it operates but , instead , appears to have been changed , himself, by it. As we have always maintained on this blog , it's not (only/just) the man or woman in that 'Rich Man's Club' that is at fault , but the actual operating system in this corrupt State that gives succor to the well-presented semi-political 'Wide Boys' and Spivs that enrich themselves in such a maggot-infested environment. In short , Mick , a chara - you only have yourself to blame.
APOLOGISES FOR THE LATER-THAN-USUAL POST.... 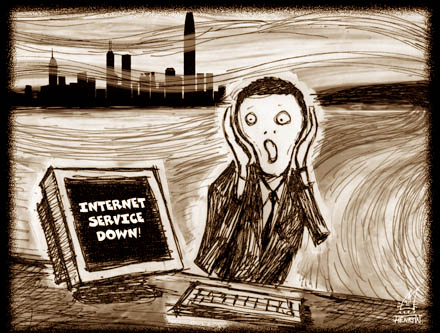 .....BUT , yesterday, our SSP ('Sometimes Service Provider') once again considered it too hot/wet to plug the damn thing in on their end until about 11pm last night - by which time we had already given up on it! One wet/hot day in this State and everything comes to a standstill. But sure maybe that's why the world loves our attitude so much.....!
Thanks for reading, Sharon.