'THERE WILL BE ANOTHER DAY.....' By Peadar O'Donnell ; first published in January 1963.
All he need do was give the names to a local school teacher who was, I knew, sib to his wife's people - he could tell this teacher and forget all about it. I soothed him a little , telling him I was not trying to frighten him as he was not that type but he was a greedy man else he would not be in this job and that he could now feed his greed and stay alive. I saluted his wife and left , half expecting him to cycle past me on his way to the barracks , as I walked to the railway station. But he didn't , and that was the only word passed between us on an arrangement that worked very well indeed. I had a little while to wait for the train and as I paced the platform the station-master recognised me. When I found out who he was I went into his office and wrote a careful note , which he would deliver, to the teacher I named to the bailiff. I worded the note in such a way it would be a protection to her if he reported on my talk with him. I found I could break my journey in Stranorlar and still make a connection for Dublin : at Stranorlar , I met Seán McCool , the senior IRA Officer for East Donegal. I wanted him to alert his units to keep an eye out for seized cattle , for I could not be sure the bailiff would be helpful to us. It seemed likely to me that seized cattle would be sold somewhere within his area , and he was interested in doing that , even eager to do it. He was deeply read in James Fintan Lalor but he was very much the IRA man and found it hard to believe that mere agitation would get us far. He thought we would help things a lot more if we kidnapped the bailiff.....(MORE LATER).

THE PETER BERRY PAPERS....... The Top Secret Memoirs of Ireland's Most Powerful Civil Servant : Dirty Tricks, Election '69/ Spying on a Unionist Politician/ Keeping the (State) Taoiseach informed/ The Garda Fallon Murder/ Advice to Jack Lynch- 'Fire the pair of them...'/ Vivion De Valera's advice to O'Malley/ Rumours of a Coup D'Etat/ The Internment Plot, November 1970/ Secret Meeting with William Craig.
From 'MAGILL' magazine , June 1980.
" At the end of November 1970 there were all the signs that I was to be the centrepiece of a Government decision - I should really say a decision of a caucus in Government - ostensibly promoted for my safety from kidnapping by Saor Éire but timed to come into effect before a by-election in County Donegal which Fianna Fail hoped to win with the help of a substantial Protestant vote which would be attracted by the Government's evident determination to put an end to violence." (Mr. Berry's point is that all the security advice available to the Government at the time - from the Gardai and the Department of Justice - was against the introduction of internment at that time but that in the face of this opposition the Government was prepared to go ahead at a time when it appeared likely to be to their electoral advantage.
Following his retirement in January 1971 , the Government refused to make their monetary recompense to Mr. Berry which he said he was explicitly promised by Mr. O'Malley following consultations with the Taoiseach and the Government.)
On January 14th 1965 , the then Taoiseach, Seán Lemass, travelled to Stormont to meet the Northern Ireland Prime Minister (sic) , Captain Terence O'Neill. The meeting was regarded as a seminal event in Irish history but it was not known then that contacts had been taking place on a regular basis at a lower echelon in the public service. Peter Berry describes a remarkable meeting in September 1963 , which took place between him and his counterpart in the Northern administration , William Stout (!) , as well as the then Northern Minister for Home Affairs , William Craig. The meeting took place at the instigation of the then Minister for Justice , Charles Haughey....... (MORE LATER).
PICKET IN SUPPORT OF IRISH REPUBLICAN POW'S....

On Saturday 29th September 2012 , the Clondalkin (Dublin South-West) based Cumann of Republican Sinn Féin - the Maire Drumm/Kevin Barry Cumann - will hold a picket in support of Irish Republican POW's outside the Offices of South Dublin County Council in Clondalkin Village (facing the Mill Shopping Centre) between 12.30pm and 1.30pm. All genuine Republicans welcome !
"LET ME EAT CAKE. SHOULD BE HUMBLE PIE BUT IT'S NOT...." 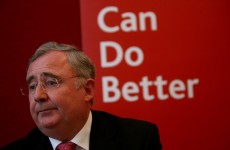 One of our (!) wealthy [alleged] 'poacher-turned-gamekeeper' politicians was interrupted by reality whilst dining-out at taxpayers expense on Friday 24th August last. Most unbecoming , I must say , as poor Pat deserves some thanks for having "led the successful campaign against the water charges..." (details here) and is one of the many Socialist bulwarks in Leinster House that are fighting hard to protect the low working and living standards of the employed and the unemployed against the greedy right-wing Fine Gael tide. And the nice restaurant where Pat was dining at taxpayers expense serves flying pigs. There are two lessons to be learned here : posh restaurants should not let scumbags into their premises as politically-unelected members of the public don't get on too good with them and Pat should bring a packed lunch with him in future and rough it at his oak desk. And be grateful that he can afford a few sandwiches and that he has an oak desk from which to eat them.
KENNY , COLLINS AND LENIN : ENDA WILL READ WHATEVER IS PUT IN FRONT OF HIM BECAUSE HE KNOWS NO BETTER. JUST THE TYPE THE IMF LIKE.

Our pic shows Lenin addressing a bunch of Free Staters in O'Connell Street , Dublin , in 1920 , with Michael Collins on the platform. Enda Kenny can be seen in the crowd , over there on the far right of the pic.....
.....but it seems it never happened. And, for what it's worth, we can confirm that it has all been like a bad dream.
PROUD TO BE AN IRISH REPUBLICAN. 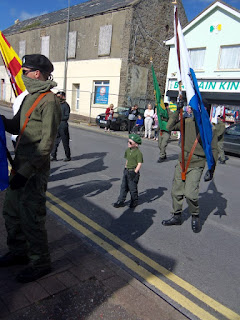 Hunger-Strikers Commemoration in Bundoran , 25th August 2012.
During his oration , Diarmuid MacDubhghlais quoted a comment from Paul Johnson, a political friend of Margaret Thatcher : "In Ireland we have tried every possible formula; direct rule, indirect rule, genocide, apartheid, puppet parliaments, real parliaments, martial law, civil law, colonisation, lane reform and partition. Nothing has worked. The only solution we have not tried is absolute and unconditional withdrawal...."
Diarmuid addressed that as-yet untried 'British formula' in his speech and commented , in an equally well-received Republican fashion, on other aspects of the on-going British military and political presence in this country. A few pics from the event can be viewed here and this wee blog would like to extend congrats to the Bundoran/Ballyshannon H-Block Committee for organising the commemoration and to the many Irish Republicans that attended despite the usual hassle from the protectors of this corrupt Free State. Well done !
IT IS NOT ONE SWALOWE THAT BRYNGETH IN SOMER.....

...but we'll take a ray of sunshine whenever we can get it , Mr. Maginnis !
One-time 'Apprentice Boy' and ex-UDR Major (now 'Baron of Drumglass') Ken Maginnis made the news today for doing something decent , as opposed to one such occasion when he dismissed the SAS killings of two Irish Republicans by gloating "Two swallows don't make a summer..."
Maginnis may be taking a back seat , but he leaves behind a party of like-minded individuals , loyal to Westminster and to the half-crown. But the summer sun melts slush , and our day will come.....
Thanks for reading, Sharon.