I told my neighbours that I did not know whether the recent strife had broken the pattern of neighbourliness among us so much that neighbours would not gather round the neighbour in trouble and save his cattle : I am a good public speaker and I used my gift to the full that day , picking my words as well as my ideas to make it difficult for anybody to break in on my version of the state of things. The uneasy swirls of the opening few minutes gave way to an attentive quiet and I hardened my message into incitement - from that day on , people should be on their guard when a stranger asked his way to this house or that , for the bailiff who lived a good dozen miles away would often not know just at what house to strike. Local hackney drivers would have to be doubly careful. The guards would be unlikely to give the bailiff much guidance , and anyway they should give him none , let him run into clods and sods and angry dogs. Not even the guards would expect people to ask him in for tea. It was no part of the guards' duty to help the bailiff get stampeded cattle back on to the road or , if the bailiff brought a lorry , to get the cattle away quickly. I did not know whose duty it would be to remove the scatterment of stones on the public road that prevented the lorry from getting past - most likely the county council workmen - but no matter who removed the stones , the chances were there would be another scatter of rocks a bit father on.......
(MORE LATER).

THE PETER BERRY PAPERS....... The Top Secret Memoirs of Ireland's Most Powerful Civil Servant : Dirty Tricks, Election '69/ Spying on a Unionist Politician/ Keeping the (State) Taoiseach informed/ The Garda Fallon Murder/ Advice to Jack Lynch- 'Fire the pair of them...'/ Vivion De Valera's advice to O'Malley/ Rumours of a Coup D'Etat/ The Internment Plot, November 1970/ Secret Meeting with William Craig. From 'MAGILL' magazine , June 1980.
14TH JULY 1970 :
" On Tuesday evening of 14th July I attended with the Minister , a conference with the Attorney-General and Senior Counsel in Government Buildings in connection with the forthcoming trial. On our return to the Department of Justice after 7.00pm all the staff had gone and the Minister came to my room to discuss further aspects and before we broke up he told me that Major Vivion de Valera , who was Managing Director of the 'Irish Press' newspaper had spoken to him about his phone call to the Editor on 8th July , said that he had no doubt that he had done so on the advice of his civil servants and he went on to warn him , a young minister , against a too ready acceptance of the advice of his civil servants. He warned him , in particular , according to the Minister , 'of that man , Mr Berry, about whom he could tell him things which , perhaps, it was better he should not hear...' I asked the Minister to what was the Deputy referring and the Minister said that he had told Deputy de Valera that he would prefer not to be told......"
(MORE LATER).
PSF LH 'TD' SAYS McGUINNESS 'WRONG TO MEET BRITISH QUEEN'.
STATEMENT FROM PEARSE DOHERTY , PSF Leinster House member , 24TH JUNE - "(Provisional) Sinn Féin opposes the proposed state visit of the Queen of England, Commander-in-Chief of the British armed forces until there is complete withdrawal of the British military and the British administration from Ireland . And until there is justice and truth for victims of collusion, no official welcome should be accorded to any officer of the British armed forces of any rank....." 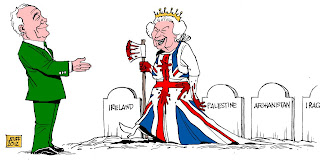 ....more from Mr Doherty here. But of course that was then , this is now. A whole two years have passed since those words were boldly uttered.....!
A British Crown Steward (and a Bailiff of the Manor of Northstead) , who happens to move in the same circles as Martin 'MacGilpatrick' McGuinness and who is a good friend to him , has generously described the meeting and handshake between his political pal and his 'queen' as "...a meeting of equals.." , even though he is well aware that MacGilpatrick McGuinness is only useful to such British institutions for as long as he stays subservient to them ie any more of this 'United Ireland' rubbish and he'll find himself on the naughty step!
The 'royal' handshaker himself has stated that his meeting with a British 'queen' is "... an opportunity for me to extend the hand of peace and reconciliation...." and , when asked about the Republican-minded views he once held on this issue, compounded his ignorance by declaring "...the young Martin McGuinness, the one you're speaking about lived in different times, in terrible times...there was conflict, war, occupation, injustice and discrimination....." and , of course, all those injustices were 'gerrymartind' to an end when an unprincipled political (and military) leadership realised that they could 'trade' their alleged political 'bottom line' for a much more easier and lucrative career on the other side of the fence.
Come forth from your graves
The H Block ten
As (Provisional) Sinn Fein bow
Like good Englishmen....
I 'borrowed' the above verse from here and , in much the same way that the Provisionals have applied 'poetic licence' to that which they consider to be 'republicanism' , I have tweaked the original but , in doing so , I have not turned it on its head.....
Thanks for reading,
Sharon. 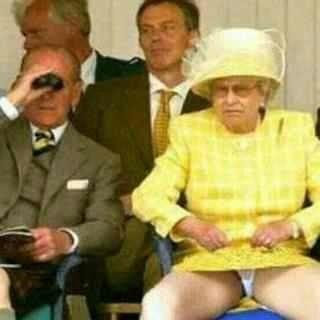 ......who has directly voiced opposition to any contact with this British 'queen' until such time as a British political and military withdrawal has been obtained ! *
Check back with us tomorrow for this EXCLUSIVE !!! article - or read about it later in the newspapers......
Thanks for reading ,
Sharon.
(*.....or at least until she starts wearing trousers..)