DUBLIN 1922 : FROM DRUMCONDRA TO CLONDALKIN.

I called on Phil McCauley next ; he had seen me go by and was on the lookout for me. He had been in the village , and the Free State people there were blaming themselves for not breaking in on Peadar O' Donnell's meeting "when he turned it into politics". Their talk was that this was Peadar O' Donnell's way of tricking the people back into the fight against the Treaty which the IRA had not the resolution to make with any firmness. A man Phil met at the forge told him he had it from a man who knew what he was talking about , that the Land Commission would sell out anybody who defied them on arrears : they would sell the land for the amount of the arrears and that would be a great temptation , especially now with all this bitterness. I listened to Phil McCauley pile doubt on doubt to make a gloomy picture : " Jimmy Getins and Big Nial Houston want you and me to go over to them this evening or send them word where to meet us. We have to move quick before this kind of talk makes headway among the people." I was to find, again and again , over the hard years of struggle that lay ahead, that Phil McCauley had this gift of painting a dark picture and then taking a courageous stand.....
(MORE LATER).

THE PETER BERRY PAPERS....... The Top Secret Memoirs of Ireland's Most Powerful Civil Servant : Dirty Tricks, Election '69/ Spying on a Unionist Politician/ Keeping the (State) Taoiseach informed/ The Garda Fallon Murder/ Advice to Jack Lynch- 'Fire the pair of them...'/ Vivion De Valera's advice to O'Malley/ Rumours of a Coup D'Etat/ The Internment Plot, November 1970/ Secret Meeting with William Craig. From 'MAGILL' magazine , June 1980.
15TH SEPTEMBER 1970 :
"The trial was due to open on 22nd September : a consulation was held in the Attorney General's office on 15th September for the purpose , I suppose, of becoming acquainted with Counsel. I had met them briefly in the Attorney's office , with the Minister, on 14th July and, as my evidence was - to my mnd - straightforward , I did not foresee any difficulties for me. I discussed the question of producing and reading from my diary in support of my account of my conversation with Mr. Haughey on April 18th and the Attorney said that I could if the notes had been made at the time but that I should ask permission of the Judge. I was also told that it was sound to answer the questions briefly and to the point and not to feel rushed. I was given no indication that my direct testimony was to be confined to my conversation with Mr. Haughey and that my conversation with Chief Super. Malone and his corroboratory evidence would not be called for in evidence by the State. Incidentally , police witnesses complained to me that they had experienced great difficulty in getting to see the prosecuting lawyers and that when they did it was only for a short period , much shorter than was usual in police experience. At my consulation with the Attorney General and in conversation with the Minister , it was agreed that in view of the serious threats to my life , according to the police , my part in the presentation of evidence would not be overplayed - in fact , that it would not be emphasised....."
(MORE LATER). 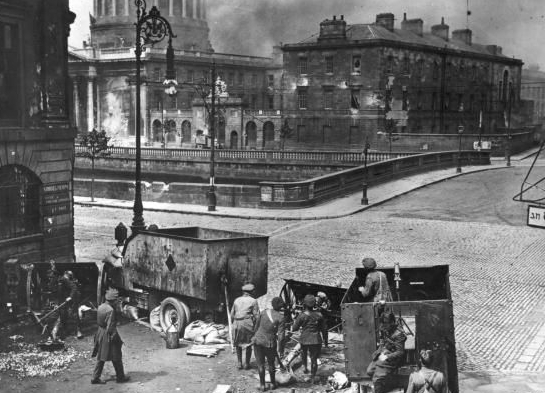 Dublin 1922 : Free State forces acquire weaponry from Westminster and use it against Irish Republicans.
On the evening of Friday October 6th 1922, a young Dublin lady , Jennie O’Toole (last entry , this page) - a member of Cumann na mBan - was pasting Republican leaflets on lamp posts on the Clonliffe Road in Drumcondra and, when she got near the Distillery Road junction, she was shouted at repeatedly and verbally abused by a local man when he saw the nature of the material involved. That loudmouth was , according to information distributed in Irish Republican circles at the time , Free State Army Captain Pat Moynihan , who lived on that same road. Moynihan , an Irish Republican 'poacher-turned-gamekeeper', could very well have been watching that street as two of his nieces were expected home on that route from a date to a theatre which they had been on with two anti-Republican State operatives , Nicholas Tobin and Charlie Dalton , who both worked for the Free State Army Intelligence Section at Wellington Barracks. When Charlie Dalton was the same age as one of the NFE youths mentioned in this piece - Joseph Rogers (16) - he was recruited by Michael Collins and joined the squad that Collins was then assembling : this IRA Unit was permanently housed in Abbey St, Dublin, in a 'front' premises in which a 'legitimate' business operated from - 'George Moreland, Cabinet Maker' , and squad members were paid £4 10s a week to carry out assassinations on a full-time basis. Shortly after his 17th birthday , as a member of that Squad , Charlie Dalton took part in the executions of British Army Major C M Dowling and British Army Captain Leonard Price in their bedrooms in Baggot Street.
The distressed young lady, Jennie, encountered three young lads , members of Na Fianna Éireann, who offered to take over the work : Edwin Hughes (17),who lived at 107 Clonliffe Road , Drumcomdra ,Brendan Holohan (17) ,49 St.Patrick’s Road, Drumcondra and Joseph Rogers (16) ,2 Upper St.Patrick’s Road, Drumcondra. It appears to be the case that Free State Captain Moynihan met Nick Tobin and Charlie Dalton and told them that Republicans were in the area , pasting leaflets , and that Tobin and Dalton contacted a near-by Free State Army barracks for a search party and arranged to meet them in the area. Dalton could very well have known who he was hunting , as young Brendan Holohan and Joseph Rogers were near-neighbours of his and the nature of his job would have dictated that he familarise himself with local Republican activists.
The three young boys were still pasting leaflets on poles on that route which took them in the vicinity of Free State Captain Pat Moynihan's house when , shortly after 10.30pm on that Friday night, a Free State Army truck screeched to a halt beside them and they were violently thrown in to the back of it and taken to Wellington Barracks , where they were interrogated and released. Their Free State captors included Charlie Dalton and Nick Tobin. The next day - Saturday 7th October 1922 - the three young lads were lifted again by the Free Staters and soon found themselves standing in waste ground just off the Naas Road in an area known then as 'The Quarries' , in Clondalkin (near to the Naas Road/Monastery Road junction) : each of them was riddled with bullets and had a coup de grâce delivered to 'finish the job' - a shot to the head.
In November 1922 , an inquest was held at which the prosecution demanded that a verdict of murder be brought against Charlie Dalton but , apparently, the Jury were 'reminded' by the State that they were living in 'exceptional times' and,following that and possibly other 'reminders' , the Jury declined to entertain the prosecution. In an effort to suggest that 'justice will be done' , Dalton was then 'arrested' by his colleagues in the CID but was never charged with an offence related to the 'Quarrie Killings'.
The youngest of the three lads , 16-years-old Joseph Rogers, was the son of well know Dublin Bookmaker Mr. Thomas Rodgers and had served two years of his apprenticeship as a mechanical engineer.
But this crime did not go unnoticed - Dermot MacGiolla Phadraig, a Na Fianna Éireann training officer, was passing by the area at the time on Saturday 7th October 1922 and witnessed the executions and a Charles Byrne, an undercover man for the IRA in Oriel House, was also passing by and actually spoke to one of the Free State gunmen, Charlie Dalton.
The remains of Edwin Hughes (17) was identified by his older brother, Gerald, 17-year-old Brendan Holohan's body was identified by his father Michael and Joseph Rogers (16) was identified by his older brother, Michael.
Incidentally , Nick Tobin , one of the Free State 'Quarrie Gunmen' , was in charge of a Free State raiding party later on that same month (October 1922) when they went to kill more Republicans who , they were told, were operating an IRA bomb-making factory from house number 8 in Gardiner Place , in Dublin city centre: Nick never made it back to his Free State base that day , having been shot dead by 'accident'.

Na Fianna Éireann at the GPO ,Dublin, Easter Monday 2012.
The Na Fianna Éireann organisation is still active to this day and , as in 1922, continues to support the Republican position : Na Fianna Eireann (literally "Warriors of Ireland") has had several subtitles in its history; Irish National Youth Movement, Irish Republican Youth Movement, Irish Republican Scouts etc but its central ethos has never changed. It has always had the object of educating the youth of Ireland in national ideas and re-establishing the independence of the nation. The goal of the organisation on its foundation in 1909 was "...to re-establish the independence of Ireland by means of training the youth of Ireland to fight Ireland’s fight when they are older and the day comes..." Members are trained in scouting skills and parade drill and receive education regarding Republicanism and Irish history and heritage. In short , the NFE organisation instills a sense of pride , worth and value into those who join - worthy character traits which they carry with them into adulthood.
Thanks for reading, Sharon. Whilst doing a wee bit of research for a piece we hope to publish here this coming Wednesday - concerning three young lads from the Northside of Dublin who were viciously dealth with by Free State forces in 1922 - our 'Junior' got diverted (as young lads do!) when he came across mention of a local landmark which he and his friends know well - a supposed 'magic well' that is situated within walking distance of '1169 Towers (!)' and is sometimes used as a meeting-up place , as it's only a stones throw from a better-known landmark - Newlands Cross.
The 'Well' in question - St. Brigid's - was, at one time, situated on what was known as 'Brideswell Common' , an abandoned piece of land which travellers passed on their way to Kildare. The 'Well' and surrounding land was 'owned' by William Caldbeck Esq., who rented it to a Mr. Ormsby. The 'Commons' area at that time consisted of just two fields with a rough lane dividing them , and a natural spring which the locals named 'St.Brigid's Well' , in honour of St.Brigid who, according to folklore, would baptise so-called 'pagans' in the waters of the Well - and, in return, the locals payed particular homage to her on the 1st February each year : 'the Feast Day of St. Brigid'.
Infants that died before they could be baptised were said to be buried in this immediate area as a lease signed by Caldbeck Esq., allowed for burials in a 'ground [area] of 4 Perches...' and this and the fact that St. Brigid made regular 'pit stops' there soon ensured that the Well became a 'special place' , the waters of which were said to improve the eyesight of young girls , once their eyes were washed with a wet cloth which was then hung on the nearest tree to dry - as the cloth dried , the eyesight of the girl who had been washed with it improved.
Anyway :enough diversion - a forty minute walk from St. Brigid's Well , heading towards the Inchicore area, would take you to a spot where, on October 7th 1922, the bodies of three teenage boys were found : each had been shot in the head...
(MORE ON WEDNESDAY , 18TH JULY 2012...)