RUAIRÍ AND DAN : LINKED BY THE ONE DATE.

'THERE WILL BE ANOTHER DAY.....' By Peadar O'Donnell ; first published in January 1963.
Sinn Féin suspicion of me would be sharpened if I should ask the Republican Movement now to entangle itself in agitation , for agitation led to politics and politics to the snake pit of the Free State Parliament. It was true that my message would be to the IRA mainly, but the stampede to my resolution at the General Army Convention was essentially a Sinn Féin stampede. The nearer I got to Dublin the more my thoughts darkened. The townlands would likely have to soldier alone for a while. The most interesting period in the story of a movement which eventually plays a dominant part on the national scene is the early days when the idea that gives it light is little more than a will'-o-the-wisp waiting on men to give it life. The first letters from Donegal concerned themselves with little things ; but then the bailiff struck , the sour, plucky man, and struck again. It made for uneasiness that he picked on Republican homes , isolated among Free State neighbours, and at hours when no member of the household was at hand , and escaped without a Free State neighbour as much as raising a shout. I got no word from my teacher friend. Phil McCauley wrote in his firm, calm way that the story would change once the bailiff struck at Croveigh or the Getins-Houston-Biddy Doherty countryside , but I had only one weapon to my hand - I could make 'An Phoblacht' as near as no matter the official organ of the agitation , and this I did. I gave headlines to the spate of decrees issued at sittings of the court in Dungloe , and I dealt with the troubles of the townlands editorially.....(MORE LATER).

THE PETER BERRY PAPERS....... The Top Secret Memoirs of Ireland's Most Powerful Civil Servant : Dirty Tricks, Election '69/ Spying on a Unionist Politician/ Keeping the (State) Taoiseach informed/ The Garda Fallon Murder/ Advice to Jack Lynch- 'Fire the pair of them...'/ Vivion De Valera's advice to O'Malley/ Rumours of a Coup D'Etat/ The Internment Plot, November 1970/ Secret Meeting with William Craig.
From 'MAGILL' magazine , June 1980.
" Mr Craig repeated , at this stage, that he had full confidence in the RUC, that he did not concern himself with details and that he must accept the police reports that a situation existed in which the IRA were active and that further precautions were necessary. I repeated that the Gardai stationed throughout the Border counties should be in a better position to know what was going on than the RUC who, presumably , were acting through agents. I suggested that somewhere along the line somebody was passing false information and I also said that it was strange , too, that before Mr. Craig's statement on the widespread IRA activities no suggestion had come from the RUC to the Garda Authorities. I mentioned that on 6th September Chief Inspector Smith of the Special Branch in Belfast had called to see Superintendent McMahon , the chief of our Special Branch in Dublin Castle , had discussed IRA matters with him and had made no mention of drilling in any particular place. Mr Craig and Stout expressed surprise at this which was obviously not known to them. I said that on earlier occasions Mr Smith had had meetings with Chief Superintendent Moore of the Special Branch in the Depot and with Superintendent McMahon and that at no time had he given them particulars of IRA activities , that he had only spoken in generalities. I said that within the previous 48 hours I had seen Chief Superintendent Moore and Superintendent McMahon and I had had the most categoric assurances that the Gardai were not aware of any activities in Border counties. I told them that the Gardai hadn't a shred of evidence which would lead them to think that a Border campaign would be re-opened this winter......"(MORE LATER). 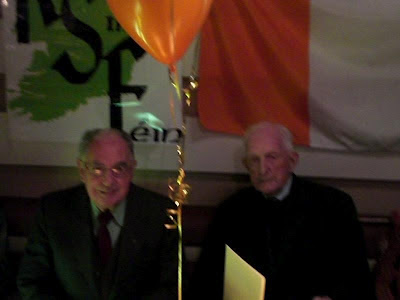 Ruairí O Bradáigh and Dan Keating , pictured in January 2007.
Ruairí O Bradáigh and Dan Keating :
Ruairí was born on the 2nd of October (1932) and Dan Keating died , aged 105, on the 2nd of October (2007). I had the pleasure of meeting both men many times , at political gatherings and socially , and 'gelled' with both of them - Dan for the almost sixth-sense he possessed in being able to accurately judge character in a person and not going 'behind the door' , should the need arise, in letting you now what he thought of you , and Ruairí for the same reasons : both up-standing and committed Irish Republicans and Gentlemen , dedicated to the same Cause. We have , physically , lost Dan , but we still have Ruairí , and we are appreciative of that fact , and of the man himself. Happy (belated!) Birthday , Mr. O' B - and may you have many more of them. Míle Buíochas, Ruairí , for all you continue to do for Irish Republicanism !

"..... in Gods name, don’t let it come about that tomorrow, the next day or the day after, that Haughey, FitzGerald, Spring, and those in London and Belfast who oppose it so much, can come out and say, “Ah, it took 65 years, but we have them at last,” and those in Leinster House who have done everything, the firing squad, the prison cells, the internment camps, the hunger strike, the lot, and weren’t able to break this movement, that they can come and say at last we have them towing the line. It took us 65 years but they come in from the polls, they come in from the wilderness and we have them now. Never, that’s what I say to you — never." (from here.)

'When asked if he'd do it all again, there's not a moment's hesitation before he answers, "Oh Christ I would! You met great people and made great friends, you know. They were great times....." ' (From here.) On this date in 1981 the H-Block Hunger-Strike ended , bringing the number of Irish Republicans who died on hunger-strike since 1917 to twenty-two :
Thomas Ashe, Kerry, 5 days, 25 September 1917 (force fed by tube , died as a result).
Terence McSwiney, Cork, 74 days, 25 October 1920.
Michael Fitzgerald, Cork, 67 days, 17 October 1920.
Joseph Murphy, Cork, 76 days , 25 October 1920.
Joe Witty, Wexford , 2 September 1923.
Dennis Barry, Cork, 34 days, 20 November 1923.
Andy O Sullivan , Cork, 40 days, 22 November 1923.
Tony Darcy, Galway, 52 days, 16 April 1940.
Jack 'Seán' McNeela, Mayo, 55 days, 19 April 1940.
Seán McCaughey, Tyrone ,22 days, 11 May 1946 (hunger and thirst Strike).
Michael Gaughan, Mayo , 64 days, 3 June 1974.
Frank Stagg, Mayo , 62 days, 12 February 1976.
Bobby Sands, Belfast , 66 days, 5 May 1981.
Frank Hughes , Bellaghy (Derry) , 59 days, 12 May 1981.
Raymond McCreesh , South Armagh , 61 days, 21 May 1981.
Patsy O Hara , Derry , 61 days, 21 May 1981.
Joe McDonnell , Belfast , 61 days, 8 July 1981.
Martin Hurson , Tyrone , 46 days, 13 July 1981.
Kevin Lynch, Dungiven (Derry) ,71 days, 1 August 1981.
Kieran Doherty , Belfast , 73 days, 2 August 1981.
Tom McIlwee , Bellaghy (Derry) , 62 days, 8 August 1981.
Micky Devine , Derry , 60 days, 20 August 1981.
A statement issued at the time by the Republican POW's outlined the reasons for ending the protest : "We, the protesting Republican prisoners in the H-Blocks, being faced with the reality of sustained family intervention, are forced by this circumstance, over which we have little control at the moment, to end the hunger strike.
After four years of continual protest, and after the failure of the Cardinal O'Fiaich/Humphrey Atkins talks, and having exhausted all other means of protest to bring about a settlement, we embarked on hunger strike on October 27th, 1980.That hunger strike ended on 18 December 1980, when the British government intimated to the hunger strikers that they would implement a workable and just solution which was forwarded to the hunger strikers on 18 December 1980.
In the course of the immediate post-hunger strike period it became increasingly clear that the British government had reneged on their commitment to implement that solution and so we were back in a pre-hunger strike predicament and thus forced to go back on hunger strike. On 1 March 1981 Bobby Sands embarked on hunger strike...."(continued here.)
Three days later it became clear that the hunger-strikers had achieved their objectives , albeit with certain British-imposed 'conditions' - "..... (it was announced) that all prisoners, including the ones protesting, would be able to wear their own clothes all day long. The only restrictions imposed were that this clothing could not be a form of IRA uniform and the clothing could not resemble the guards' uniforms. Additionally, prisoners would receive much of the remission they had lost while on the protest, and association between prisoners, while not "free," was reorganized to better suit the prisoners' wishes. The demands concerning mail, parcels, and visiting privileges, which had been conceded earlier, were formalized. Initially no concessions were made concerning prison work, but the actual work was re-defined in such a way that prisoners who refused to work for the prison system would not receive much of a penalty....."(more here.)
This poem explains what those of us who lived and campaigned through that period witnessed -
Freed — from grim barbed wire — girt hell brooding concrete oppression over green Antrim hills
Freed — but only in death
that others held captive
this sorrowing night
may see the day.
‘Continues to deteriorate’
Weaker’ ‘in coma’
terse relentless bulletins
batter, rouse,
a nationalist,
strangely, deeply stirred
from long assumed apathy
by that fatal hour.
Tricolour draped coffins
out of Long Kesh
God, how many more?
Black flags in dismal rain
stunned faces, silent
sorrowful crowds
grieving families
Furious anger, frustration
suppressed, seething,
rising, unleashed
Faces of deprived youth
pained, raging
Flashpoint erupts,
in ill-pervading darkness,
running feet, batons, petrol bombs
barricades, smash, flames, plastic bullets that, — explosions war.
Immovable, distant, middle aged
faces of power
clichés easily discharged
in English suburban tones
‘Terrorists!’
‘No concessions’
‘A crime is a crime is a crime’
Like letting Irish people die
slowly for eight hundred years
Criminals?
One elected to their own
Vaunted parliament
(sacrilege! disqualify!) democratically by thirty thousand
Fermanagh/Tyrone
After all
a majority
is a majority…..
A prison poet that, writing
creatively of a lark,
Another who read at Mass
described as ‘religious’
A suicide?
or ‘greeter love hath no man’
Sands
Hughes
McCreesh
O’Hara
Thatcher leaves us our Fenian dead and Ireland still not at Peace....(from here.)
And Westminster still hasn't learned (...and neither have the sleeveens in Leinster House) : as long as the British continue to claim political and military jurisdictional control over any part of Ireland the conflict , and the justification for it, remains. 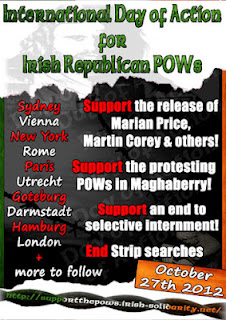 "We salute the prisoners in Maghaberry Prison, Co Antrim who have been on protest for political status. The British and the Stormont regime, which includes our former comrades who have accepted and now administer British rule in the Six Occupied Counties, entered into an agreement with the prisoners in August 2010 to end strip-searching.
They reneged on that arrangement. They never implemented the alternative of the BOSS chair and so the no-wash strike continues. Even the secretary of the prison warders’ union has stated publicly that the protest should be settled.
Meanwhile there is a publicity black-out on the plight of the prisoners while their comrades outside do their utmost to support them. The political status won at such great cost by the heroic hunger strikers was signed away as just another of the many surrenders to English rule in Ireland by the Provo leadership...." (From here.)
On Saturday 27th October next , Irish Republican groups in Europe and further afield will be holding a day of action to show their support for Irish Republican POW's : more information here , and we will be re-posting this event over the coming weeks. Get yourself organised now to either support an already-announced protest or organise one yourself in your own area. Our prisoners need your help.
Thanks for reading, Sharon.