A MAN-CHILD TRYING TO LIVE IN (AND WITH) THE REAL WORLD.

'THERE WILL BE ANOTHER DAY.....' By Peadar O'Donnell ; first published in January 1963.
I took it for granted McCool asked a few men of a local unit to go with him and that so neat a raid would be well protected by secrecy. It turned out, however , that in his anxiety to keep to the pattern of an affair of neighbours, he gathered round him a mixed group who took it all light-heartedly, so that the countryside soon knew all there was to know. The police had no trouble in getting evidence enough to make arrests - it was not so easy to expect people to believe I had no finger in it , when one of the arrested men was my brother, Brian.
I got a whisper that my own arrest was not far off and I spent all the time I could spare in the townlands getting ready for it. I followed my usual plan of giving a lot of time to the individuals I thought best fit to hold the townlands together. There was no recrimination among us on the raid which, by now , had back-fired badly. Members of the committee had encouraged it , and for the reasons I suspected - they felt people needed some evidence that they had at least hidden friends, somewhere.
At a gathering of the committee and townland delegates I gave the clearest statement of my views I had so far submitted at a formal conference. This skirmish we were conducting could lead into a land war which could restore the independence movement that the Treaty had wrecked. I was arrested in due course and charged with a number of offences, all rising out of the agitation - I do not remember the exact wording of the charge and I think it unlikely I even read it at that time for in any case I must refuse to plead.....(MORE LATER).
THE WRONG ARM OF THE LAW. William McGrath (left) , a man now synonymous with the KIncora Boys' Home.
"A list of names seized by police probing allegations of child abuse includes ministers, members of the royal household and a world-famous pop star....all were recorded as visitors to a suburban guest house that operated as a gay brothel..." (from here) - the latest (...at the time of writing, anyway..) 'sex scandal' to center around the British 'Establishment' , following hot on the heels of the Jimmy Savile disgrace.
Administrations the world over have made an art form of using what it would coyly term 'human nature' to keep its 'interests' secure and/or as a reason for disposing of those 'interests' (when the time suited it to do so, of course) and you would have to be extremely naïve (and not only politically) to believe otherwise.
However , despite what is at times overwhelming evidence , there are those who seemingly refuse to accept that those they support(ed) are/were 'like that' ("William McGrath and his fellow defendants spent whole lifetimes building up images of familial rectitude . They never once said anything about their homosexual orientation . It is worth questioning whether they were entirely homosexual at all . No hint of their being gay ever seeped out into the gay community , much less the general community ....... " - from here, post dated August 31, 2005 , and they do that for reasons best known to themselves. Regular readers will know that this blog constantly questions the actions and inactions of various administrations - Leinster House , Stormont and Westminster , for instance - but we do so from what we believe to be a yardstick of common sense , and not from a position of being an almost blind follower of either the administration(s) or that which it (they) rail against. In short , we haven't been 'bought' by one side or the other and we intend to stay that way!
A MAN-CHILD TRYING TO LIVE IN (AND WITH) THE REAL WORLD.

"Take a life to save a life. That’s what we revolve around, I suppose....if there are people trying to do bad stuff to our guys, then we’ll take them out of the game.....I  am one of these people who like playing Play Station and Xbox,  so with my thumbs I would like to think that I am quite useful...."
- Britain's 'Prince' Harry , as quoted here, on a rare moment when he wasn't using his thumb to cover his modesty. Or sucking it. His thumb, that is.....

Never dawning on him for one moment that he and his type are "....the people trying to do bad stuff..." , this half-idiot sits in his Apache helicopter , wired into it like a Borg (and with as much free-thinking as same) firing Hellfire missiles and rockets at 'the enemy' , from a safe distance, before training his 30mm gun on what remains of them. He then heads back to base at 200mph to play war games : " It's a joy for me because I'm one of those people who loves playing Playstation and Xbox so, with my thumbs, I like to think that I'm probably quite useful...." (from here)

He's a "useful" idiot, to the 'Establishment' and the tabloids,  but not half as much an idiot as are the millions of people in 'Great Britain' that, financially, keep him and his 'royal' family insulated from real people. He doesn't have any experience of what goes on in real people's lives and is more at home 'whacking the bad dudes' on his Playstation or from the comfort of his Apache helicopter , interrupting same occasionally to party with his Chelsea-type friends. Had he not been born into a life of privilege he would have been dead by now as he is incapable of making his own way in this world and, indeed, I doubt whether he can walk and chew gum at the same time. And the gum would have more intelligence.
1200 (250X4 + 100X2) 4 26TH..... 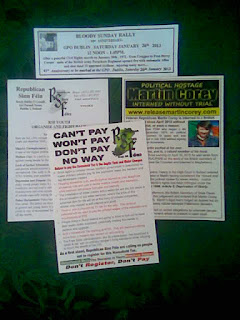 These four different RSF leaflets will comprise the 'packs' for distribution in Dublin city center on Saturday 26th January 2013.
RSF Head Office has organised a total of 1,200 leaflets for distribution at the 'Bloody Sunday' picket in Dublin on Saturday 26th January 2013 : these will be 'formed' into two different types of booklets/packs , 250 of which will contain four leaflets and 100 of which will contain two leaflets. This method of distributing political leaflets has been used by RSF for years now (if, indeed, not actually pioneered by them) and has proved to be very successful.
The 'Four Pack' contains a 'Bloody Sunday' leaflet , a Martin Corey leaflet, an RSF 'Youth' leaflet and an 'anti-household tax/septic tank/water charge' leaflet, whilst the 'Two Pack' contains one each of the first and third of those leaflets. If you are in Dublin city centre on Saturday 26th January 2013 between 11.30am and 1.45pm , I'll be on one of the leaflet teams at the O'Connell Bridge and/or Ambassador end of O'Connell Street - come over, take a 'pack' and say Hello!
"HAVE YOUR PEOPLE CONTACT MY PEOPLE.....!"

I'll have to hire a Secretary if this keeps up !
Earlier on this month (January 2013) a London-based journalist contacted me and asked if I would be interested in writing a short piece for them for publication. We discussed the issue and a brief on the type of article required (political) was given to me and, after more discussion between us (during which payment to me was offered but which I refused - although I will be getting a free copy of the publication in question in the post!) I threw a few aul (!) words together and these will , I'm told, shortly be gracing the pages of the publication in question!
I'll say no more for now , except to state that my evil plan to take over the print world as well as this interweb-blog yoke is running to plan and you , dear reader, will (hopefully!) soon be able to declare "....ah sure I knew her when she was a nobody.." !
'MORE LATER' , as they say on an 'almost famous' blog..... ;-) !
Thanks for reading, Sharon.