Garda to appear in court on assault charges this month. By Liz Walsh, from 'Magill' magazine, October 1998.
Another internal garda inquiry is still ongoing into the handling of a murder investigation in which a Dublin man confessed to two murders he did not commit. Dean Lyons, a 24-year-old heroin addict and drifter, originally from Tallaght in Dublin, was arrested for questioning about the murder of two psychiatric patients, Mary Callinan and Sylvia Shields, in Grangegorman in Dublin in 1997. During questioning in the Bridewell garda barracks in Dublin, Dean Lyons told detectives , on video, that he killed the two women but, within a month , another man admitted to the murders.
The internal inquiry, led by Assistant Commissioner Jim McHugh, subsequently exonerated Dean Lyons and he was released from custody last March. However, the separate question of how the confession of an unreliable and vulnerable character such as Lyons led to him being charged with murder has not yet been resolved.
A European human rights organisation recently visited six garda stations and three prisons during its 10-day Irish visit - the 'European Committee for the Prevention of Torture and Inhuman or Degrading Treatment' (CPT) visited six of the eight garda stations suggested by the 'ICCL', which was concerned that the Pearse Street, Fitzgibbon Street and Finglas stations in Dublin and the Immigration Service and garda station both in Shannon and Henry Street in Limerick are not equipped to hold prisoners detained for extended periods under anti-terrorist or drugs legislation. (MORE LATER). 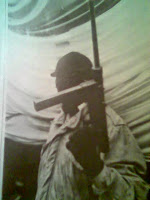 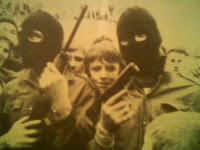 THE NEW IRA IS YOUNGER, MORE RADICAL AND HAS SEEN LITTLE OF LIFE OTHER THAN VIOLENCE. By Ed Moloney. From 'Magill' magazine, September 1980.
APOCALYPSE AVERTED.
At 9.30 on the morning of Saturday 19th April this year a car containing five armed and masked men drew up outside the home of a farmer not far from the South Armagh village of Crossmaglen. The men got out of the car and went into the house where the farmer and his family were just finishing breakfast. They demanded and got the keys to his tipper lorry parked outside and while two of the men stayed with the farmer's family the other three men drove the lorry back, where they had come from, across the border.
Two miles across the southern side of the border along the windy roads of county Monaghan the lorry drove into a farmyard and stopped. The men got out and were joined by several others who had been waiting nervously for them in a number of outbuildings. Over the next two hours the farmyard was a scene of intense activity as the men screwed into position on the back of the lorry ten long mortar tubes, which were then loaded with home made mortar bombs, each containing five lbs of commercial explosives packed into beer gas cylinders.
The mortars were improvised IRA devices, called Mark 10's by British Army technical experts who had learned to fear them since exactly a year before when a shower of Mark 10's had devastated Newtownhamilton RUC barracks , killing a British soldier in the process. After the complicated firing mechanism for the mortars had been set, the lorry was driven to Caulfielf Place in Newry, about 100 yards from the town's RUC station, and parked. Five minutes later the first of the mortars went off...... (MORE LATER). It seems unbelievable that any political administration/department could introduce/enforce a writ whereby said body could seek to control, for tax purposes, how people might benefit from rainfall, yet that is precisely what is being instructed in the 'Harvesting Rainwater' notification from the 'Irish Water' company, below - 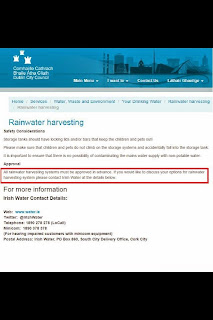 'All rainwater harvesting systems must be approved in advance. If you would like to discuss your options for rainwater harvesting system(s) please contact Irish Water....'
With that in mind, there is an indication here of where exactly this '..must be approved in advance...' edict will lead to because, despite the many differences between Oregon and this 26-county State, the political class are the same : self-serving careerists who are aware that they have a short 'window of opportunity' in which to financially secure their future and, even though they themselves are not fit to earn an honest living via an honest job, they find themselves - for a short time, anyway - in a position whereby they can 'lawfully' molest, financially, those that are not as powerful as they are. Rainwater falls the same no matter where you live and equally as predictable is the conduct of political establishments worldwide - get 'caught out' by either and your health will suffer.

Interesting figures came to light three days ago (in 'The Sunday Times' newspaper) in relation to how much some of the political parties in Leinster House are given by the State administrative system, from taxpayers money, to keep themselves in operation. The figures relate to the amount taken by each party in the last eight years, and show that Fine Gael paid itself, on average, €9234 a week over that period (and quoted that Party as stating that it employs 30 staff in its "national office") , Fianna Fáil took €8296 a week from taxpayers in the same period (and employs a staff of 24) , the Labour Party granted itself €5169 a week (and has a staff of 34) and Provisional Sinn Féin raided the State coffers for €2567 a week, every week, for the last eight years (and has a staff of "more than 92" , none of whom "are paid more than €60,000" a year) !
You have to ask yourself why any of the above-mentioned political parties, each of which claim they want 'to change the system', would want to change a system which is so financially favourable to them? 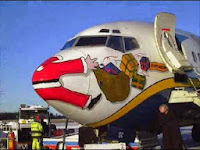 As a mother of three, I know only too well how expensive and nerve-wrecking Christmas can be, but it always seems to sort itself out in the end, empty purse and frayed nerves notwithstanding! And, as much as I'd like to see it revert to a less commercial holiday (if indeed it ever was such!) I wouldn't altogether (!) agree with the steps that the then communist political leadership took in Hungary on the 10th of December 1951 - they banned Santa Claus and associated images and attempted to propagate the idea (as far I can decipher, anyway) that farm workers/workers in general should celebrate that time of year, as a reward for their labour, to the extent that the sleigh was visually replaced by the image of a tractor!
And while there won't be a sleigh or a tractor on site on the day, Santa himself will be present, as usual. And let's not forget another republican steadfast gig that will have its last outing for 2014 this month : the 650-ticket raffle, which will be held this coming Sunday, 14th December, in a venue on the Dublin/Kildare border and at which tickets for the first such 2015 gig will be distributed. And, it being East Kildare, a tractor or two could very well be in the vicinity, too!

COLLECTION FOR THE HOMELESS.

The Dublin-based O'Connell Sands Cumann of Republican Sinn Féin are once again doing a collection this month for the homeless and have asked us to mention to our readers that they can make a donation of clothes or foodstuff etc to this worthy effort by getting in contact with an RSF/cumann rep on 018729747 or 0851457286. Arrangements will be made with each caller for the collection of whatever it is they can spare. 'There but for the grace of God...'. Go raibh maith agat.

At the time of writing, it's not looking like we'll be able to post here next Wednesday, 17th, as time will not allow - our usual routine has been upset by raffle work usually carried out by two others that are on holidays, meaning that myself and another '1169...' crew member will be out collecting ticket returns and cash on Thursday and Friday evenings and then most of Saturday is spoke for with associated paperwork and more stub collections, then the actual raffle itself on Sunday afternoon, then the usual Monday evening raffle meeting in Dublin city centre. And somewhere, in between that lot, will be a hangover from one too many pints of cider at the gig! We will get another post in before Wednesday the 24th , so do check back with us before then!
Thanks for reading, Sharon.