THE MURDER OF JOHN CORCORAN -

According to 'The Kerryman' newspaper of November 29 , 1988 , Seán O' Callaghan said in an interview (with the editor of that newspaper , Gerard Colleran) : " I personally shot Corcoran using a machine gun. I felt no remorse for the murder.....I had to travel to Monaghan to meet the IRA's Chief of Staff to get permission to shoot [Corcoran].......[leading up to the murder] John Corcoran spoke to me. I taped most of what he said. I sent the tape to his family. [Prior to the murder] we were sitting in a field chatting for three or four hours. He didn't try to get away. He was not arguing. He was not blindfolded. He knelt down on the ground and I shot. I said a prayer, an act of contrition, before I shot him. He turned his back. He was shot in the back of the head. Corcoran said 'go easy'. That was it."

O' Callaghan gave similar accounts in interviews later with the 'Sunday Times' and the 'Boston Globe' , detailing in these interviews how he had informed the gardaí of where John Corcoran was being held and of the imminence of his murder.


" An Absolute Disgrace...."
On Wednesday , January 28 , 1998 , former Tánaiste Dick Spring raised the issue in an adjournment debate in Leinster House. The following is the full text of Mr Spring's speech and the reply by the minister for justice , John O' Donoghue .......
(MORE LATER).

" All my doubts of earlier months that the Taoiseach could not have some knowledge of what was going on in the background came flooding back : his remarks and attitude did not seem to fit a Head of Government who was anxious to bring malefactors to justice. "

APRIL 29 , 1970 :
" The Taoiseach sent for me and told me that he was about to confront Mr Neil Blaney and Mr Charles Haughey with their parts in the arms conspiracy. We discussed the situation , and he was very troubled , walking up and down the room , muttering to himself. I heard him say 'What will I do , what will I do...' and , thinking that he was addressing me , I said - 'Well , if I were you I'd sack the pair of them and I would tell the British immediately , making a virtue of necessity , as the British are bound to know, anyway, all that is going on....' .

The Taoiseach rounded on me and abused me for giving him advice. I apologised and said that I thought that he had asked for advice. He went back to muttering , then suddenly made up his mind to go......."
(MORE LATER). 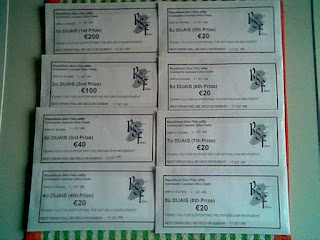 - all prizes have since been claimed , and the next raffle will take place in early January 2012 : details to follow.

....for the 35th consecutive year , the CABHAIR organisation will hold a sponsored Swim in the Grand Canal , in Inchicore , Dublin , on Christmas Day at 12 Noon : preparations , which were finalised two weeks ago , have been checked and re-checked and declared 'AOK!' , Santa has been booked for an hour - by 'Special Request' of the many kids that would otherwise run riot (!) at the location , although he may be too 'tired and emotional' to make it to the other two CABHAIR Swims which are being held that same day (details here) - and the local community has , as always , been more than generous with the 'Goodies' offered , which will be more than enough to sustain swimmers , on-lookers , passers-by and the swans , which have to be bribed with tit-bits to vacate the area for an hour or two!

Last years Swim can be read about here , and pics from it and previous Swims can be seen here : this blog will try its best on Christmas Day to give a report and supply a few pics from this years Swim , but we can't promise anything - the CABHAIR Swim Crew have asked us to assist with 'catering' at the event , which includes making sure that all guests , on-lookers and passers-by etc are 'fed and watered' and that's a very dodgy place to put us on what is otherwise a 'dry day' as far as the pubs are concerned..... !

UP THE REPUBLIC - OUR DAY WILL COME !


A PEACEFUL CHRISTMAS TO OUR READERS !

A just and permanent peace in Ireland is most desirable . It is the greatest gift we could give to ourselves and our children . We have been denied justice and peace for more than eight centuries , because of English invasion , occupation and misrule of our country .

This happened before when the Treaty of 1921 was signed and was forced on the Irish people in the name of peace . Republican Sinn Féin cherishes the objective of a free , democratic Ireland , as envisaged by Wolfe Tone and all Republicans down to 1916 and our own day . Many brave men and women sacrificed a lot , even their lives , for this noble Cause .