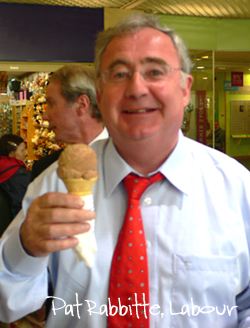 ....about the fact that this doesn't happen often enough : one of the socialist and worker-friendly (!) Leinster House reps was still digesting his taxpayer-funded lunch when he was served some 'afters' at a s(h)ell-out conference where he was earning his pension by rubbing shoulders with fellow-business men. This man and his Party campaigned for votes in order that they could "....create an economy and a society that is fair , prosperous and sustainable....(in)a country (sic) that cherishes all children equally.....that values the contribution of the elderly.....where family and community are given priority....etc etc " : the second tragedy here is that 431,796 voters in this State believed those 'promises' and the first tragedy is that those votes were enough to get this 'socialist' Labour Party into an administration as part of a coalition. But perhaps the real tragedy is that voters like those will more than likely be fooled by Fianna Fail 'promises' the next time round and give that shower of time-serving chancers an overall majority. Anyway : full marks to those protestors , and I hope Oscar Wilde was right when he stated " Disobedience, in the eyes of anyone who has read history, is man’s original virtue. It is through disobedience that progress has been made, through disobedience and through rebellion." Let's put the 'Rabbittes' on the run.....
Thanks for reading, Sharon.