Michael Noonan (left), the Fine Gael spokesperson on Finance and former (State) Minister for Health, spoke on the export credit insurance issue. His remarks were based largely on John Bruton's speech (in Leinster House) in September 1994. From 'Magill' magazine, October 1997.
"From this series of decisions, it can be seen that Deputy Albert Reynolds flagrantly overrode the Government decision he sought in Cabinet that morning. He did so in the absence of civil servants and, therefore, no minutes of the meeting were taken and there is no record of the decisions made. Deputy Reynolds played favourites in issuing export credit insurance. He favoured the Goodman companies, Hibernia Meats and Master Meats to the exclusion of other beef companies. He also provided exclusive advance information about future Government plans for export credit to the Goodman Group, which gave it the inside track and amounts, in effect, to insider dealing. The Goodman Group knew the price it could charge in Iraq because it knew it would receive cover. This is plain from the written evidence presented to the beef tribunal.
Other aspects of Deputy Reynolds' decision in respect of export credit insurance have been debated in the Dáil on a number of occasions. However, in light of the findings of the McCracken tribunal and if in pursuit of the money trail a personal money link is established between the favoured meat companies and the then Taoiseach, Mr. Haughey, the issue of export credit insurance already investigated by the beef tribunal would have to be re-investigated by the new tribunal. I believe that the infamous package in respect of the Goodman Group of companies forced on the IDA by the then Government will also have to be re-investigated.
The beef tribunal report shows that while Deputy Reynolds was the Minister responsible for protecting the statutory independence of the Industrial Development Authority he allowed the then Taoiseach to pre-empt the role of the IDA by meeting the Goodman Group in connection with details of its negotiations with the IDA without the knowledge of the authority. Deputy Reynolds allowed a press conference to be called in respect of the Goodman beef project before the grant agreement was signed and before the authority had met to decide whether to accept his decision. This completely compromised the statutory independence of the IDA, an independence which, as Minister for Industry and Commerce under the 1986 Act, the Deputy had overall statutory responsibility to protect. Before that he allowed the Goodman package to go straight before Cabinet over a weekend. This allowed the Department of Finance one working day to examine the package worth £120 million."
[END of 'Meat Exporters and Insurance' : NEXT - 'Garda Investigations' , from 'Magill' magazine, October 1998.]

By Michael O'Higgins and John Waters. From 'Magill Magazine' , October 1988.
Crown Counsel John Laws was in perky form. Throughout the inquest he had made no secret of his dislike for the media and, at one point when a witness remarked that he had read about a particular point he had made in evidence in the newspapers, John Laws remarked as an aside - "Somebody has to read them, I suppose". At the end of Paddy McGrory's summing up, the coroner had requested the media not to print or broadcast any of the material contained in it lest the jury read it before retiring to consider a verdict. Within an hour the material was broadcast in part by BBC Radio 4 and John Laws was on the attack, criticising the BBC but, he said, he did not want to make an issue of it as he had no wish to give this "dishonest and dishonourable spat" more attention than it deserved.
Now, as the court waited for those fifteen minutes to pass, John Laws turned to the press gallery, waved and smilingly said - "Have a nice day". He seemed confident about which way the verdict was going and, when the verdict was announced, there was an immediate rush from the press gallery. Felix Pizzarello had requested a policeman to go and get forms on which the jury were to formally record their verdict but, because of the noise of the press stampede, nobody remaining in the gallery had heard Pizzarello make this request. It was five minutes before the policeman returned and, in the interval, nobody in the court spoke a word. There was total silence. Nobody - at least nobody remaining in the press gallery - knew what they were waiting for in the middle of this long silence. It was as if a moment had been frozen in time. (MORE LATER). The Film Centre cinema, O'Connell Bridge House, Dublin - it first opened for business in October 1966 and not only paved the way for other cinemas in Dublin, but was such a success that it also payed the way for a sister cinema in Dublin, the Cameo, 52 Middle Abbey Street, which opened in 1976 but closed its doors in 1990. Its 'parent', the Film Centre, went out of business in 1984.
On Sunday night, 26th November 1972, the Film Centre cinema in O'Connell Bridge House in Dublin was packed with about 156 customers, with 3 staff members on duty. Probably the last thing on the minds of any of those 159 people would have been the 'hot topic' of the day, which was being loudly debated in Leinster House and in the media - the 'Offences Against the State' Act, which sought to concern itself with the so-called 'Troubles' in the occupied six counties in the north-east of Ireland and which one particular 'cleric', Ian Paisley, was using to make a name for himself by creating fear and hatred in the minds of those who listened to him.
Paisley's fellow loyalists were not, however, content to just verbalise against those they considered the 'enemy' and, on that night and in the early hours of the following day, they planted an explosive device outside the rear exit door of the cinema, in a laneway which connected Burgh Quay to Leinster Market. The bomb exploded shortly afterwards, injuring about 40 of those inside the building, although, luckily, no one was killed. A lady injured in the explosion, Jacqueline Howlin, gave this account at the time : "Sometime between 1.30 a.m. and 2 a.m. on the 26th November 1972 there was a colossal bang on the right side of the hall quite close to where we were sitting. The force of the explosion lifted us out of the seats. I was thrown out onto the floor in front of where I had been sitting. I put my hands up to my face and screamed. I found blood oozing from my face and forehead. I had been wearing spectacles and the glass was broken and shattered. When I stood up I found my right leg numb from the knee down. My boyfriend Paddy shouted at us to get out quickly. Paddy helped me part of the way to the foyer and I think it was a Fire Brigade officer or Gardaí put me sitting on a table. I was taken straight away to the Mater Hospital where I was detained and treated for my injuries. My forehead was cut and my eyelids were also cut. All my face was marked either by the glass from my spectacles or flying splinters of wood. My right leg from the knee down was badly cut and opened. There was a piece of flesh missing from the lower calf. I had thirty stitches inserted in my leg at the Mater Hospital that morning...."
More details on this loyalist bombing in Dublin, on the 26th November 1972, can be read here (on page 22).

Our picture (left) should show Fine Gael MEP Brian Hayes and it would, too, but he seems to be camera shy lately.....!
Brian Hayes operates, politically, in the Tallaght area of Dublin, just across the Naas Road from our base in Clondalkin and, as such, he would be as familiar to us as any of the other local and/or near-by career politicians, whether right-wing or not, and perhaps more so, as he is a bit more 'colourful' than most of them.
Hayes flirted, politically, with the 'Workers Party' at one stage in his career, and is known to have been impressed by Proinsias de Rossa and Eoghan Harris, and at one stage observers thought he was going to join the 'Democratic Left' grouping which was formed by some of the 'WP' membership. He is in favour of a 'Big Brother'-type of society even though he has divorced himself from 'the man on the street' to the extent that he believes he is suffering, financially,on an MEP's wage of just over €2000 a week, as much as everyone else, despite the fact that he is no stranger to the political 'big spenders' list!
Anyway - as he is a local politician, we occasionally receive 'flyers' and other self-serving leaflets from him and others, and one of which we received in the last few days - from his colleague, Emer Higgins - caught our attention because it featured a group photograph of the local Fine Gael 'team' - Emer herself, Kenneth Egan , Francis Fitzgerald, Derek Keating and Brian Hayes. Except, as per our 'pic' (top left) - 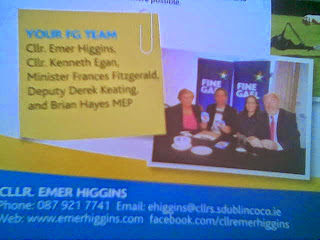 - Brian Hayes, although captioned as being present, was absent! The pictured 'team' would be advised to hold their next photo op on a payday, as Brian might just drop-by on that occasion.... 'This Day in History for 26th November...Historical Events....1793 - Republican calendar replaces Gregorian calendar in France.....' and 'Timelines of History.....Today in History - November 26....1793...Republican calendar replaced the Gregorian calendar in France.......' or 'The French Revolutionary Calendar (or Republican Calendar) was officially adopted in France on October 24, 1793.....'
- disagreement, as you can see, regarding the date as to when that republican calendar was introduced : '...this calendar was used for twelve years, from 24 October 1793 to 31 December 1805. (An attempt was made in 1871 to reinstate it, but this attempt failed.) However, it was back-dated to have begun on 22 September, 1792....' (from here) and then there's this - '...leap years were retained at the same frequency as in the Gregorian calendar, but it was enacted that the first leap year should be year 3, not year 4 as it would have been if the Gregorian calendar had been followed precisely in this respect. Each four-year period was to be known as a Franciade. The seven-day week was abandoned, and each 30-day month was divided into three periods of 10 days called décades, the last day of a décade being a rest day. It was also agreed that each day should be divided into decimal parts, but this was not popular in practice and was allowed to fall into disuse....' (from here).
However - no mistakes or wrong dates with this republican calendar - 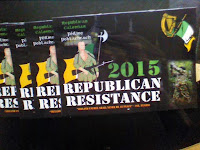 - available from 223 Parnell Street in Dublin, 229 Falls Road in Belfast or any RSF member, for a fiver. Any republican would appreciate one as a Christmas present!
Thanks for reading, Sharon.