THE FRENCH REVOLUTION AND THE IRISH STRUGGLE .......This article is based on a lecture delivered by Sean O Bradaigh in Dublin on January 21 , 1989 , marking the 70th Anniversary of the founding of the First (All-Ireland) Dail Eireann in the Mansion House on January 21 , 1919 , and the links between Irish and French Republicans - 'Partners in Revolution' 200 years ago . Published in 1989 by Sean Lynch , Cleenrath , Aughnacliffe , County Longford , on behalf of the County Longford Branch of the National Graves Association . By Sean O Bradaigh .Liberte ! Egalite ! Fraternite ! Ou La Mort ! ( (Freedom ! Equality ! Brotherhood ! or Death!).Unite Indivisibilite De La Republique !
" What Humbert achieved with small forces in a country where 100,000 men were available to fight against him , is simply amazing , and yet , it does not seem to have received the flattering recognition it deserved from History " . - Stuart Jones , English Historian .
Panic reigned as French snipers took over vantage points and picked off the bewildered enemy ; fierce sword and sabre duels ensued in the streets as a whole army fled in disarray , some to Hollymount and Tuam , and some cavalry did not stop till they reached Athlone ,County Westmeath , some 60 miles away !
British General Lake's personal baggage was found abandoned in the street ; well and truly and aptly were the events of that day called the 'Races of Castlebar' ! Sections of the Longford and Kilkenny militias turned their coats and hoisted the green flag : French Captain Jobit estimated the numbers who changed sides at 574 men : for this , many of them were singled out afterwards for particularly brutal treatment and execution .
Irish militia man Gunner James Magee of County Longford was probably the most famous of them .(MORE LATER).

THE UNBROKEN LINKS IN THE IRISH REPUBLICAN CHAIN ....... By Martin Calligan.(No year of publication.)
Ireland has fertile fields , underveloped minerals - oil , gas and fish in our waters . Foreign fish-factory boats now will destroy our fishing beds while it is illegal for Irishmen to fish in their own waters . We have thousands unemployed while four out of every five items in our shops are foreign goods .
We have a so-called 'Head of (a 26-County) State' called 'President of Ireland' , yet not a single person in the Six Counties ever had a say in the matter ! ('1169...' Comment.... except , no doubt , the British 'powers-that-be' !) We have a so-called 'Peace Process' and yet innocent people murdered month after month by British and pro-British death squads . Our Martyred dead are an embarrassment to the pro-British media in the 26 Counties .
Padraig Pearse said - " We proclaim the Irish Republic ......may your children enjoy the happiness and prosperity which only freedom can bring . I am not afraid to face the judgement of God or posterity ....... " (MORE LATER). 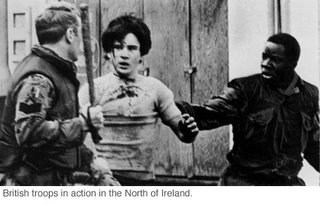 BUTCHERS DOZEN .......A poem by Thomas Kinsella , written after Bloody Sunday . From 'IRIS' magazine , March 1983 .
There in a ghostly pool of blood a crumpled phantom hugged the mud : 'Once there lived a hooligan - a pig came up and away he ran , here lies one in blood and bones , who lost his life for throwing stones ' .
More voices rose : I turned and saw three corpses forming , red and raw , from dirt and stone each upturned face stared unseeing from its place -
' Behind this barrier , blighters three , we scrambled back and made to flee : the guns cried 'STOP' , and here lie we ' .(MORE LATER).