THE CAREFUL PREPARATION OF EVIDENCE BY GARDAI :

There are copious examples of the Gardai having meticulously prepared their evidence for the Sallins mail train robbery trial ; these are in the book of evidence which contain the statements made by all the Gardai involved in the case , and the similarity of these statements is such as to suggest that there was a great deal of co-ordination of Garda evidence .

Take for instance the statements of several Gardai in relation to Michael Plunkett (one of those arrested) who was acquitted at an early stage during the trial at the Special Criminal Court in Dublin : take the statement of Garda A (we have been legally advised that we should not name the Gardai at this stage in our presentation) -

' As we moved away from Harcourt Terrace (Garda Station) , Michael Plunkett said "You fixed that nicely" , and (Garda B) said to him " Is it not true that you were free and you asked to go back to collect property " and Plunkett said "That's right" . (Garda D) then said " I don't know what you're talking about , but I can assure you one thing - we fixed nothing , what are you talking about anyway ? "

Plunkett replied - " A man in there has identified me as being one of the men in his home on the night of the robbery ." (Garda D) said " Is that so? " , and (Garda A) then said to Plunkett - " It was you who delayed leaving the station ." Plunkett replied - " That's right , it's my hard luck , I am finished after that ." They then had a general conversation after that ... ' That was Garda A's statement : three more Gardai gave statements and it is worth comparing the similarity of these.......
(MORE LATER).

A PEOPLE'S ARMY .......
'IRIS' magazine talks to two active women Volunteers in the Irish Republican Army about their involvement , their political attitudes , and their observations on the role played by women in the liberation struggle. Both Volunteers are from the Free State , where they live , and are in their twenties . 'Mary' comes from a country area and has been in the IRA for six years ; 'Anne' comes from the city and joined the IRA about a year ago .
From 'IRIS' magazine , November 1982.

'IRIS' magazine : " How has your IRA involvement changed your personal outlook ? "

MARY : " It has made me more conscious of other struggles and oppressive regimes all over the world , and of the need to fight all forms of oppression . "

ANNE : " It's made me realise that you don't have to accept things as they are . For instance , I see how more a politically uninvolved friend of mine is inclined to say - ' Well , what can you do about it ? That's the way things are...' My attitude is : ' Here's what you can do..' It's just a matter of saying 'I am not going to put up with this ' . "
(MORE LATER).

NEW DEPARTURES FOR SINN FEIN ?
Sinn Fein's recent election success in the North of Ireland have focussed attention on the Provisionals' new turn to political activity at local level . There have been parallel developments in the organisation in the 26 counties .
'GRALTON' magazine spoke to Paddy Bolger , Ard Comhairle member and National Organiser for Sinn Fein ,with special responsibility for Dublin , about the changed perspective .
From 'GRALTON' magazine , August/September 1983 .

'GRALTON' magazine : " We have heard a lot about Sinn Fein's more serious involvement in constituency work in the North . Is there something similar happening in the 26 Counties ? Are you now planning for the local and European elections next year ? "

PADDY BOLGER : " There have been major developments in our political appreciation of the situation in the country over the last few years . The basis of this is the realisation that military action and political action purely in support of that were not sufficient , to build a base even for national liberation and the realisation that sloganising about socialism and relating it to a vision of a better future and to some magical formula which would work itself out when the British withdrew , were not a sound basis on which to build a conscious mass movement . ('1169...' Comment - can a [revolutionary] "mass movement" be built on actions such as joining and supporting the RUC/PSNI and all that such a move entails ?)

The developments that have taken place in the movement are general , and not confined to the North . A lot is due to the fact that the people who were young activists in the early 1970's , some of them in the late 1960's , have by a natural progression moved into more prominent positions . ('1169... ' Comment - .... and , obviously , developed a taste for "prominent positions" , regardless of where such positions are located!) For the first time in decades , republicans have had the opportunity through this long struggle , on a sound minimum basis , to develop our politics not abstractly but in experience . " ('1169...' Comment - 'republican politics' never included jettisoning core principles in order to make the organisation more politically 'attractive' to its opponents.)
(MORE LATER). 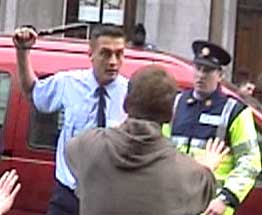 It is important for us to establish at this stage that we are not alleging that all Gardai who gave evidence perjured themselves , nor are we alleging that the 19 Gardai against whom allegations of ill-treatment were made were in fact each guilty of ill-treatment . It is quite possible - indeed , quite likely - that many of the Gardai who gave evidence knew nothing about what was going on .

Furthermore it is both quite possible and quite likely that many of the Gardai accused of ill-treatment were in fact innocent of the charge . But what we are saying is that it seems certain that a significant number of Gardai did perjure themselves during the course of the trial.......
(MORE LATER).

A PEOPLE'S ARMY .......
'IRIS' magazine talks to two active women Volunteers in the Irish Republican Army about their involvement , their political attitudes , and their observations on the role played by women in the liberation struggle. Both Volunteers are from the Free State , where they live , and are in their twenties . 'Mary' comes from a country area and has been in the IRA for six years ; 'Anne' comes from the city and joined the IRA about a year ago .
From 'IRIS' magazine , November 1982.

'IRIS' magazine : " Although as an organisation the IRA has a sound attitude to the role of women in the struggle , obviously the attitudes of some of its Volunteers mirror those of society in general . Do you think it reflects on their ability as Volunteers if men retain sexist attitudes towards women ? "

MARY : " It's a terrible weakness in some male Volunteers . If they have sexist attitudes I quite honestly don't think they should be Volunteers at all . It's the same as any Volunteer taking a discriminatory line against any section of the community that's already discriminated against . "

ANNE : " To me it would seem they do not understand the nature of the struggle , not just for a British withdrawal but for setting up a democratic socialist republic where men and women are equal . It is through the struggle that they should overcome their sexist attitudes . "
(MORE LATER).

" People are going to find that they can't keep patching up the capitalist system . It just isn't patchable , " says Michael O' Riordan , " Dick Spring thinks it is , but he's going to find out otherwise . "

The Irish communists are widely criticised for being the most Stalinist and pro-Soviet in the Western world . When asked whether that was an accurate description , Michael O' Riordan replied : " If I were asked that in a court of law where I had to answer I would plead guilty . Proudly guilty to being the most Stalinist . Make sure you put down that I said that with a smile ! "

An exhibition of photographs and paintings , depicting the history of Irish communism is now on display in the New Book Shop off Parliament Street in Dublin, and other anniversary activities include several lectures which are being scheduled through the shop .
[END of 'COMRADES , BROTHERS AND SISTERS']
(Next - 'NEW DEPARTURES FOR SINN FEIN ?' : from 1983)


.......some of the words used today by those who gathered in a venue in Dublin 4 known as the 'Royal Dublin Society ' to 'debate' (ie pass a motion) on how much support to give , for now , to a British 'police force' on Irish soil ! And they picked (and 'packed...!) the venue well , as those who gathered there (some of whose leaders are pictured here , after the vote...!) are members of a Leinster House-registered political party which has an association with two 'parliaments' on Irish soil which were 'established' with the consent of British 'Royals' : Leinster House and Stormont.

In reality , what happened today is seen by this blog as simply another Leinster House political party (albeit one with a faint sniff of sulphur from it!) 'playing [constitutional] ball' with its buddies and financial backers in the various 'establishments' (ie Washington , London and Dublin) and attempting to become more 'mainstream' . They continue to insist that they are 'rebels' , 'revolutionaries' and 'socialists' but , truth be told , they are, at best , trained house pets , politically and financially controlled and directed by Washington , London and Dublin . Their ranks are swollen with 'angry nationalists' who felt it safe to join them after they turned constitutional in 1986 rather than the SDLP and/or Fianna Fail , as both of those political parties had not been quick enough in obtaining 'civil rights' for them . And that, readers , is the objective of the PSF ('Please Stoop Further') party - to secure a "brighter future" under British jurisdiction for Irish citizens living in the occupied Six Counties . And , of course , all the better when they will be comfortably salaried to do so by Westminster and Leinster House !
Ní Seoiníni Sinn Go Léir!