Éamonn Ceannt was an uileann piper, a member of the IRB Military Council and a signatory of the 1916 Proclamation. He was stationed in the South Dublin Union during the Rising of 1916. As a member of the Provisional Government he was executed by the British Army in Kilmainham Gaol on May 8th 1916.
A Republican Commemoration to honour Éamonn Ceannt will be held in the Crumlin area of Dublin , in a 42-acre park named after the man, on Sunday August 17th 2008. Those attending are asked to assemble at 'Superquinn' on the Sundrive Road at 12.45PM.

On a point of interest: two of our recent [repeat] visitors (click to enlarge) : 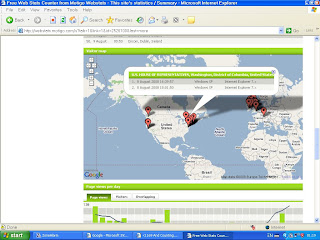 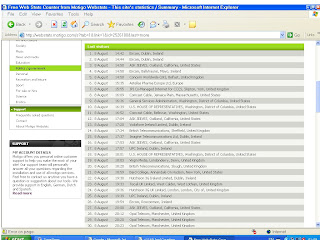 We know why that particular administration would be interested in us ie they would view that which we represent [Irish Republicanism] as a threat . However - could we ask you , the reader, to do something likewise and tell Mick why it is that you like us !
Thanks!
Sharon.

(Please help this blog NOT to become a four-out-of-four 'winner' : tell Mick why ya love us...!) Financial cost to the British(click to enlarge).

Another factor prominent in IRA thinking is the belief that the longer the war goes on the more of an embarrassment the North of Ireland situation will become internationally . This is especially so in America but also in Europe where left-wing leaders of the IRA believe it will cause increased pressure on Westminster to arrange a long term solution capable of providing stability and security for profitable foreign investments in Ireland. IRA leaders also believe that the longer the war continues the greater the chances of another Loyalist reaction.

Although the IRA could start a terrible and bloody civil war in the North with a dozen or so well-placed bombs it hasn't done so and will not do so as it would certainly be the loser in that situation , but the IRA has applied steady pressure on the loyalist community mainly through the shooting of part-time and 'ex'-UDR soldiers . In this respect the possible reaction of loyalist leaders like Ian Paisley is particularly important : as one independent observer and confidant of IRA leaders put it - " They hope that by shooting loyalists in the security forces they'll cause Ian Paisley to have another brainstorm and start another loyalist strike. The hope then is that Thatcher, the 'Iron Lady' , wouldn't do a 'Harold Wilson'
but give the loyalists an ultimatum . In which case it's all up for grabs !"

Ian Paisley , by that reckoning , is one enemy the Provos would prefer to keep alive : these are some of the 'new tactics' as operated by the 'new' re-organised IRA.......
(MORE LATER). IRIS : " Although IRA activity is frequently intensive and highly successful in any particular week or over a period of weeks , there are other periods of little or no apparent activity . Why does this 'unevenness' exist? "

IRA: " Well , I think that the answer to that is that this is the nature of guerrilla warfare . Vietnam is the one guerrilla war that people refer to as the textbook guerrilla operation but , in fact , prior to the Tet Offensive hardly a shot had been fired . After that , of course, everything changed . If you take the Algerian struggle , actions were few and intermittent , Cyprus was the same . In Malaya there were very few Brits killed over a three-year period .

The IRA suffers from a number of drawbacks . Firstly , unlike many liberation movements there is no government supporting us militarily or financially . We have a small land area in which to fight , and are one of the few guerrilla armies that lives and fights in the occupied area . We are fighting a major world force which has massive resources , and at our backs is a hostile collaborationist government * spending millions of pounds trying to help defeat us . We have political enemies throughout the world trying to cut our lines of supply . In the occupied area we have over fifty per-cent of the population collaborating with the enemy. ('1169..' Comment * .....and now these same Provos are salaried and suited to share space with those same collaborators.)

Our biggest single asset is the nationalist people who by and large support us to varying degrees . All our support today lies with our own people , just as in 1916 - the Proclamation said that the Irish people were relying for the most part on their own strength . So , in the light of all the minus points , we do have periods when we have an inability to strike and to keep momentum going but , if you look back, say over a two-year period , you'll see that we do have continuity and we do continue to strike . Also , it should be stressed that while there is a natural ebb and flow caused by logistical problems etc it is a mistake to judge the intensity of the struggle using solely the level of operations as a guideline . While operational levels will fluctuate , political work in IRA-based areas like education , recruitment and expanding the support base all continue on a daily basis."
(MORE LATER). " Those romantic dreams have been erased by both time and experiences . Nine years of hating the system , the blanket protests, the no-wash protest and hunger-strike have changed them from capricious teenagers to formidable opponents of British rule . On the outside , I too have shed my teenage dreams that a liberation war can be a romantic event and , although my experiences over the years have been different from theirs , my conclusions are similar.

We must not give Britain the chance to ruin other generations as it did ours * . We must never make ceasefires with the British while their soldiers patrol our streets . Sectarianism is an evil that is best attacked by removing the Brits ** . ('1169...' Comment *...the present mis-named 'Peace Process' , which still leaves Westminster in jurisdictional control of six Irish counties, is guaranteed to "ruin other generations" as it simply passes the conflict on to our children and their children / ** ...."removing the Brits" , yes - but not assisting them in their 'rule' of those six Irish counties.)

When we all meet again in a couple of years to talk and laugh , I wonder how many of us will remember that night in January 1975 . Teenagers then with dreams , now grown men with a purpose . The Brits did not break us with their system of oppression . Instead they created revolutionaries out of naive teenagers. "