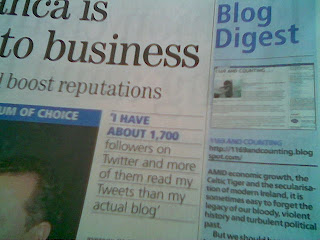 From the 'e-Thursday' section of the 'Business Week' supplement of the 'Irish Independent' , 21st August 2008 .

" 1169 And Counting is a wealth of information on our Republican past and present , and demonstrates how the Irish political landscape , like that of any nation, will never be a black and white issue."
A good review , we feel (...even if we do say so ourselves!) , from a good column ('Blog Digest') in a newspaper we otherwise wouldn't read as we don't agree with the political slant (anti-Republican) propagated by it on a daily basis.
But the review we can live with...!

Inappropriate spam...
I received this a few days ago :

Congratulations,The Queen Elizabeth's Foundation has chosen you as one of
the final recipients of a cashGrant/Donation for your own personal,
educational, and business development.To celebratethe 30th anniversary
program, We are giving out
a yearly donation of £150,000,00(One Hundred And Fifty Thousand Pounds
Sterling). to 40 lucky recipients, as charity donations/aid from the Queen
Elizabeth's Foundation,ECOWAS, E.U,UNICEF and the U.N.O in accordance with
the enabling act of Parliament, which is part of our promotion. To file
for your claim you are to fill out below information and send it to MR
TREVOR CHAMBERS The Executive Secretary Via his email contact address
Bellow.

Your Pin Number falls within our United Kingdom Claim office booklet and
you are directed to contact the Executive Secretary MR TREVOR CHAMBERS in
charge of your
Donation prize / File. Please contact him Via Email /Phone number Bellow
immediately.

Thanks anyway , Tina , but if my friends , colleagues and comrades heard that I was in receipt of payment from the British Exchequer I would have to re-locate to the hallowed halls inhabited by those I mentioned in the 'Fat Cats' piece , above! And I don't think much of the circles they 'move' in.... It's a confused and mixed structure whose features seem to be determined entirely by area strength . The effect though is to make British Army and RUC penetration extremely difficult - its principal advantage seems to be increased security and secrecy for the IRA cells but its 'Achilles Heel' is that it is highly dependent on good co-ordination at local IRA Brigade and Command level as well as at Northern Command level , what the British Army terms 'middle management' . The arrest and imprisonment of a small number of leaders would seriously impair the organisation - hence demands from senior British Army officers after Warrenpoint for the introduction of selective internment .

Although British Army sources claim that the IRA structure has now been penetrated in Belfast and East Tyrone , the 'successes' that the Brits have had this year seem to be the result more of increased undercover surveillance and disruption of IRA communications and co-ordination than from information supplied by informers . Indeed , one Brit source complains that they haven't received one decent bit of inside information from the Northern IRA for more than a year.......
(MORE LATER). IRIS : " In recent months the IRA has employed car bombs extensively , often with devastating success but also with an apparently high risk to civilians . Does the IRA intend to continue with its use of car bombs , and how would you answer this criticism ? "

IRA: " Yes , we intend to continue with the car bomb tactic . Because of the length of warning we give on a car bomb prior to its detonation , if the enemy act on the warning there's no danger to civilian lives . The car bomb is used on property only , and this is accepted even by the British Army and RUC . It is not an anti-personnel bomb , that's why we give warnings . It does not serve our cause to inflict civilian casualties , and all our operations , whether against military or commercial targets , are planned and conducted with this in mind."
(MORE LATER).

On February 26th 1971 , 38 women and six men were arrested outside Chichester Street Court in Belfast on one of the 'combat jacket' pickets , organised to protest at the arrest of republicans who had been wearing uniforms at the funerals of Volunteers . Another similar protest was to take place two days later in Beechmount Avenue , Belfast . All those arrests resulted in a dozen women being sentenced to six months in jail .

The stance taken by those women was based not so much on a family tradition of republicanism as born of the Civil Rights marches , the ensuing backlask of the loyalists and the increasingly threatening presence of thousands of British troops on Irish streets . Yet there was no special status for those women . Therefore , in 1971 , women like Rose MacAllister from Ardoyne , Rita O' Hare from Andersonstown and Anne Maguire from Ballymurphy had to wear the prison uniform . For the first-timers , the prison uniform was coloured blue - blue tweed skirt , blue sweater and polka-dot blouse . Prisoners under 21 years of age wore red , and green for those who had been in before .

Women prisoners , political or otherwise, were put in 'A1' Wing and were 'entitled' to one visit a month . Prison work was for all - laundry , cleaning and sewing , yet those nationalist women were quick to stand up to the system and to assert their dignity , refusing to be institutionalised . The Prison Governor at that time was to go on to 'make a name' for himself by allowing for the torture of POW's in his later years.......
(MORE LATER).

BRIEF REPORT AND A FEW PICS RE THE EAMONN CEANNT COMMEMORATION HELD IN CRUMLIN , DUBLIN , ON SUNDAY 17th AUGUST 2008 :

Between the 75mm of rain that fell on this isle last night and in the early hours of this morning (Sat 16th/Sun 17th) and the threatened 'at-least-75mm-more' that the forecasters have said is on the way in the next few hours - we not only had a dry spell for the Eamonn Ceannt Commemoration in Crumlin , Dublin , on Sunday afternoon but actually enjoyed 21 degrees sunshine as well!

About thirty people were at the Eamonn Ceannt Memorial Stone in the park named after the man , between 1pm and 2pm , as the Commemoration Chairperson , Andy Connolly , Dublin, welcomed them and gave a brief outline of Eamonn Ceannt's involvement in the on-going struggle for national liberation . Following a minutes silence and the dipping of flags by the Colour Party in honour of Eamonn Ceannt , the Oration was delivered by Tomás Ó Cléirigh , who went into some detail concerning Ceannt's earlier life and the tribulations he endured as a direct result of his republicanism .

Following the laying of a wreath , the Chairperson drew comparisons between that which Eamonn Ceannt believed in and suffered for and that which republicans face today - the same objective is being fought for and the same methods employed by a like-minded foe , both native and foreign , to prevent that outcome : " But to no avail , as the Cause now is as just as it was then and the same Spirit is in today's republicans as was present in Eamonn Ceannt and his comrades..."

Those present were thanked for making the journey and the proceedings were brought to a finish by Andy singing Amhrán na bhFiann. 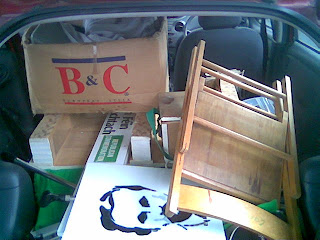 The makings of a Commemoration...

A full report of this Commemoration will be carried in the September 2008 issue of 'Saoirse' , which will be available on Wednesday 3rd of that month . More pics can be seen here and on this thread .