What a difference a day makes...
The weather more-or-less made a good attempt to do us an 'injustice' today : we were near baked alive! In sunshine and heat that reached between 22 and 25 degrees Celsius , approximately 300 people in total - comprising RSF members and supporters and snap-happy tourists on both sides of O'Connell Street - maintained a supportive vigil for about two hours in Dublin today for the annual Eve Of All-Ireland Rally.

At least one hour before the marchers had even formed-up at the Garden of Remembrance in Parnell Square , a separate RSF crew had assembled a small stage and lectern structure in O'Connell Street , on the traffic isle facing the GPO , and a 'warm-up' speaker had pulled a crowd around him and managed to hold them there until the main contingent arrived from the Garden of Remembrance. The event was Chaired by Des Dalton , and speeches from Pat Garvey , Kerry , and Richard Walsh , Derry, highlighted in the first instance the on-going political issue of Westminster's jurisdictional and military interference on this isle , and both speakers and , indeed , the Chairperson, also made reference to the brave stand taken by Maura Harrington regarding the 'Shell2Sea' injustice , the courageous stand of the Tara protestors and mention was also made in relation to the poor outcome from the so-called 'social partners' in relation to the recent pay-rise 'award' .
Also , all the speakers called for the crowd to join with those who will be marching through Dublin on Saturday , October 11th next , in the Trade Union-organised campaign for a proper health service.

Apart from the usual - and expected, though not accepted - Special Branch harassment , mostly around the Garden of Remembrance , the event went as planned : the on-going Six County injustice was again highlighted by Irish Republicans, the political prisoner issue received a two-hour airing in O'Connell Street in Dublin , the 'Shell2Sea' ,'Tara' and poor health service issues were all raised and hundreds of republican 'POW' leaflets were handed out and dozens of copies of the 'Saoirse' republican newspaper were sold. A full report of this Rally will be carried in the October issue of 'Saoirse' , due out on the 1st of that month : meanwhile , we publish with this post a few pics from today's Eve of All-Ireland Rally , with more pics available here and on this 'Indymedia' thread.

The Rally on the way down to the GPO from the Garden of Remembrance. 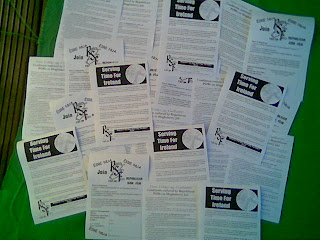 Hundreds of these leaflets were handed-out to the public at the Eve Rally today.

Profile pic of the RSF Colour Party at the Eve Rally today.

Paddy from Blanch , at the Eve Rally today-trying out the lectern for size!

As stated , more pics on view at the two links mentioned above , and a full report will be carried in the October issue of 'Saoirse' .
Thanks!
Sharon. 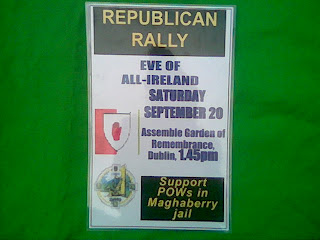 "One of the largest public rallies seen in Dublin for years was held by Sinn Féin at the GPO on the eve of the All-Ireland Football Final . Headed by a Colour Party and a pipe band , a parade of more than 2,000 people marched from Parnell Square through the main city thoroughfare as a protest against the continued unjust imprisonment of Irishmen without charge or trial .
Contingents from all over the country took part and many carried banners and placards including groups from England and Scotland . In the Ulster section was a strong representation of the Derry supporters who thronged the capital city for the Final . One placard they carried asked - ' Why are Six-County Nationalists interned in the Curragh?' ....."
(From 'An tÉireannach Aontaithe/The United Irishman newspaper , November 1958)

This Annual Republican Rally will be held in Dublin on Saturday September 20th 2008 ; those attending are asked to assemble at the Garden Of Remembrance in Parnell Square at 1.45pm from where the parade will march to the GPO in O'Connell Street. The main speakers are Pat Garvey (Kerry) and Richard Walsh (Derry).
All Welcome!
Sharon. 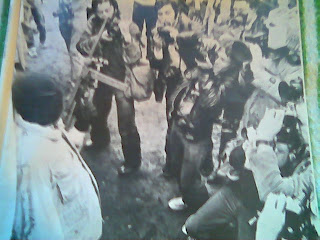 The first of the mistakes made in the 'PIRA financial estimates' as put forward by British Army General James Glover relates to 'income from theft' : since 1977 nearly £5 millions have been stolen in the 26-County State and nearly £1.5 million in the North of Ireland . According to reliable sources at least a third of the money goes in to PIRA coffers , with the rest going to the INLA , 'freelance' Provos , and 'odc's' - 'ordinary decent criminals' . That would make the Provos' income on average during that period over £650,000 per annum .

The second mistake relates to expenditure on newspapers and propaganda - according to a reliable source the Provo's newspaper , AP/RN, which sells 34,000 copies each week and employs 12 full time staff , actually makes a profit . So the Provo's surplus for arms purchases could be as much as £300,000 more than Glover estimated .

This would accord with some quantifiable facts about arms shipments . The Towerstream Consignment, by General Glover's own reckoning , would have cost about £400,000 , notwithstanding the cost of arranging it . The M60's which were in that consignment along with some 40 military Armalites stolen from the Danvers Armoury in Massachusetts in America in 1976 , would have cost about £50,000 . That's over £450,000 on arms spending in one year.......
(MORE LATER). 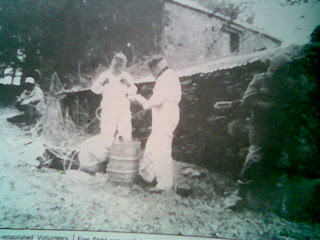 IRIS : " Garret Fitzgerald recently talked about the desirability of some form of joint border security force , and generally in recent years there seems to have been an intensification of border collaboration . To what extent is this hampering the IRA ?"

IRA : " First of all , there is not an upsurge in collaboration , there is total integration of controls between the Free State forces and the Brits/RUC , co-ordinated searches , follow-ups , sealing roads , a direct radio link and a direct computer link-up . But because the operational IRA is self-contained within the six counties , cross-border collaboration doesn't affect us .

For example , out of a series of reported arms dump 'finds' in the Free State earlier this year , only two involved quantities of IRA equipment - seven rifles in one find and an ammunition find in Emyvale in County Monaghan . The other 'finds' either didn't belong to us , were of obsolete gear , or were fictitious. It's only window-dressing by the Free State to show the Brits that they are keeping up the collaboratrive process , and to do this they are manufacturing non-existent 'finds'.

But anyway , any increase in garda/Free State army collaboration has yet to affect an IRA active service unit in Ballymurphy or stop an operation on the Falls Road , or in Derry , Dungannon or anywhere north of the border . The only actual thing that the gardai , with the heavy increase in Task Force numbers , is involved in , is the harassment of republicans throughout the twenty-six counties . We have no doubt in the future that the garda Task Force will be used against militant trade unionists and other political activists as unemployment deepens in the twenty-six counties . " ('1169...' Comment : see this article re State forces being used against political activists.)
(MORE LATER).

Liz McKee, then aged only 19 , was arrested in Andersonstown in West Belfast on December 29th 1972 and transferred to Armagh Jail on New Year's Day 1973 : she had been served with a 28-day 'Interim Custody Order', the new euphemism for detention without trial . Internment and the 'Special Powers Act' were , in name at least , no more . Stormont had collapsed in March 1972 and the British direct-rulers had been quick to vote the same repressive laws in under new names .

The 'Detention of Terrorists Order' of November 1972 enabled the Brits to intern , and this they did wholesale . About 650 people would be interned between November 1972 and the end of 1973 , over 60 of them women . The news of the detention of Liz McKee was received with emotion : on January 7th 1973 , several hundred women marched in protest through Andersonstown and were addressed by Maire Drumm. A few weeks later Teresa Holland was to join Liz McKee , soon followed by Margaret Shannon and Anne Walsh.

At first they were put in the Remand Wing , then on to 'A1' Landing , along with twelve remand POW's and about eight 'ODC' prisoners ('Ordinary Decent Criminals') . It is from 'A1' that , one Sunday night , March 4th 1973 , five republican women attempted to escape over the wall to freedom . As Teresa Holland put it - " Liz McKee and I were in one cell , three remand POW's in the next cell - Cathy Robinson , Marie Maguire and Evelyn Brady . We got hacksaws in our parcels and started on the bars . We also made ropes out of brown nylon wool . We had three cell searches that week . On Sunday night , at about midnight , we finished the bars and came out." Having reached the sentry post the women started to climb , but the alarm was raised by a Screw who had noticed a bar gone in Teresa's cell window . The escape attempt ended with the women being put 'on the boards' and sentenced to nine months . Military Police searched the cells and a fullscale riot developed . The Screws hosed the prisoners down with powerful jets of cold water.......
(MORE LATER).