"What in the name of Jeepers has being a 'Republican' to do with following a Scottish football team, or indeed any team?"

"By the way, who did most of the infamous Black Watch regiment (Belfast early 70s) support would you say?"

"Black Watch in those early days were in large part Glascow Tims who supported, yes, the Celts! Probably the only Celtic supporters in Belfast in those days......."

"Theres about 7 of us from the area will be making it our business to get to this - sounds like the makings of a good night......"

"It was the massive migration from Ireland throughout the 19th century of thousands of Protestants and Catholics in search of work -- particularly after the Famine -- that coloured the soccer clubs in some major British industrial cities."

"I am always amazed at the Irish obsession of a foreign game played by foreigners in a foreign country."

"This emotional attachment Irish people have for these teams is a bit odd. Glasgow people do not follow Bohs or Rovers, or Linfield and Cliftonville for that matter!"

"Liverpool were and possibly still are the Protestant soccer side in that city. Can any Liverpool fan prove otherwise?"

"I would prefer it if Irish citizens supported and promoted their local Irish soccer clubs, particularly, at this time, as they are in dire need of financial support. There is something incredibly unpatriotic about promoting and supporting a wealthy Scottish club....."

"How'd you make out Celtic FC to be sectarian ? You wouldn't be mixing them up with a certain club that wouldn't sign a Catholic until 1989 would you?"

An unexpected 'result' . Of sorts! The above quotes are taken from a thread we started on this site, to help friends of ours promote a function they have organised (see below) : if you have an opinion , feel free to join in . If you want a good night out , then read on.... 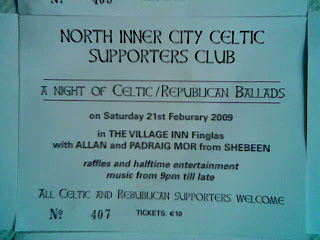 'Mad Kevin' and the lads and lassies that he hangs around with are fantastic supporters of Republicanism and have , on more than one occasion, gone out of their way to attend gigs organised by the Republican Movement in Dublin : so now it's pay-back time!
As stated on the above-pictured ticket , a ballad session featuring Allan and Padráig Mór from Shebeen will be held on Saturday 21st February 2009 in The Village Inn, Finglas, Dublin. A raffle will be held on the night and 'halftime' entertainment has been organised. Doors open at 9pm and admission is €10 per person.
Kevin and that particular 'Celtic Crew' are a lively bunch, to put it mildly (!) so a good night is guaranteed. This blog will be represented on the night , even if we do have to pay full price at the door ;-) ... !
If you're in Dublin yourself on February 21st next , see you there!
(One of the Organisers for this Celtic ballad night , Kevin , has asked that a contact mobile-phone number be made available for those wishing to inquire re ticket availability etc .
That number is : 085-8376208.)
Thanks!
Sharon.
( Post Script : my own knowledge of those type of sports is limited to being aware that rugby is a game played by men with odd-shaped balls.... ;-) ) 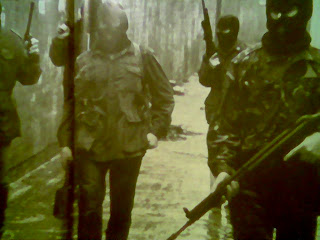 Journalist Ed Moloney speaks to a leading member of the Provisional IRA who has been authorised to speak on behalf of the IRA Army Council :

Ed Moloney : " The PIRA and its campaign of violence have been going on for nearly 10 years now . The British are still in the North despite that. Why go on? "

IRA : " First of all the IRA is not ten years old , it's over 60 years old . As for why we continue the campaign , nothing has changed in the Occupied Six Counties but there is a lot of evidence that things can be changed . We have been wearing down successive British administrations , we have worn down their will . There are indications now of changes taking place within the British political scene - the 'Young Liberals', for example, have come out in support of a policy of disengagement from Ireland and there are at present discussions going on within the National Executive of the Labour Party .

There is also evidence that a lot of British soldiers are fed up with what's going on in the North and Document 37 shows that the present commander of British land forces in the North of Ireland , Brigadier-General James Glover, knows that we are not a spent force and that we will continue . And he also admitted the cause of the trouble was the presence of British forces....... "

The book contains detailed and well-documented evidence on events about which the general public were successfully hoodwinked by British Army propagandists and an eagerly collaborationist establishment media . I myself clearly recall how, on the day the IRA successfully executed five agents of the British Army's 'Military Reconnaissance Force' in the 'Four Square Laundry' van in Twinbrook , and in a 'massage parlour' on the Antrim Road , an inhabitant of Twinbrook , prompted by a TV reporter , supplied the ritual remark for the TV screens , about "....an ordinary man (the MRF driver of the van!) just going about his daily work.."

Roger Faligot shows that among British reporters and editors there were always plenty willing to put out any story , however fantastic, as long as it served the British war effort in this country .

Eamonn McCann of the Dublin-based 'Sunday World' 'newspaper' states - " The media have been active participants in the war , not disinterested observers of it . History has proven that the artificial state of 'Northern Ireland' cannot be maintained except by force of arms . To support the existence of the State is therefore to accept the necessity for violence . No newspaper which supports the British troops in Ireland can afford to tell the truth." 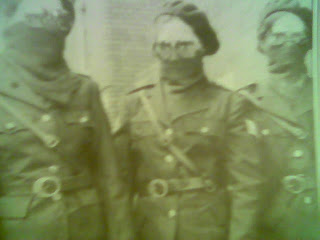 The recreation facilities are pitiful . Even a plan to build a gymnasium/workshop will be confined to use by male prisoners . The women have no cooking facilities either , although the transferred prisoners from Portlaoise do . Marion Coyle's enforced restriction on letters - she is allowed to receive only two each week - has frequently been abused by the prison authorities who have allowed her crank letters and anonymous letters while withholding letters from close friends .

For a long time Marion Coyle received verbal abuse from the Free State soldiers who patrol the prison's perimeter walls and who were able to look directly into her cell . However , that abuse did cease , for a while at least , after a complaint by independent Leinster House member Tony Gregory was voiced in that institution . On the ordeal of prison visiting , her mother outlines the difficulties involved.......