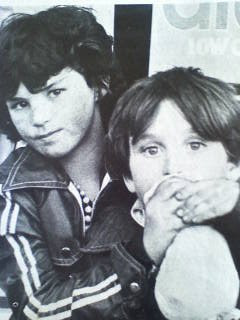 Rule Number One : check your glue bag at the door . Eat and wash if you want to , then collect your bag on the way out . No point confiscating the bags as the kids just wouldn't come back , and then wouldn't get the chance to eat or wash . No one's going to change that fact - these are Dublin kids , street smart , and they know the layout of the city . They will forage elsewhere for food and a wash , if they have to.

Some of the children who visit the house are ill , obviously so . They refuse to stay alone in hospital , terrified of being on their own . Bring them in pairs and they are turned away from the hospital as "they cause trouble" . Tentatively , the Dublin Committee For Travelling People has been seeking ways of bridging the gap , bringing the children to the Jervis Street Drug Unit in twos and threes for counselling . Apart from the direct damage caused by the glue there is the danger of serious accidents - the kids chase one another through traffic , and at least one small girl has been knocked down twice by cars . Sometimes there are hallucinations , resulting on at least one occasion of one boy insisting that if he could just be left alone at the top of a building he could fly away from it . There have been no deaths . Not yet.......
(MORE LATER).

Tommy McGrath was sure that young prisoners had already been released ahead of time because " representations" had been made , and that morning he had met a relative of a young Provo recently given a multiple life sentence . People like that had hopes of the Agreement too , he said , they wondered if it might produce an amnesty . " Eventually that's what I hope that the Provos would see the proper course is , through negotiations * , just as De Valera did in 1925 when he gave up the struggle - if that happened we'd have some movement on an amnesty. "

Peter Barry's praise for the RUC and commendation of it to young Nationalists wasn't easy to assimilate , however : " That was his personal view , " said Frank Feely, to silence all around us in the room . " We're happy enough with the Dublin government ** . I'd put the blame on the British government for failure to deliver on the RUC and the judiciary - they'll never have the co-operation of the nationalist people *** until there's justice in the judiciary and the RUC , and the abolition of the UDR is brought about . If that doesn't happen it will lead to the death eventually of the 'Anglo-Irish Agreement' (the Hillsborough Treaty) - a couple of years is as long as people will give it....... "

('1169..' Comment * for "negotiations" read 'if we give up the Struggle will you treat us better?' , because that is 'success' to people like Tommy McGrath. ** "Happy enough" with those who politically , physically and morally work hand-in-glove with those "you blame" ? How can that 'happiness' be justified? *** Wrong! "nationalist co-operation" with Leinster House and Westminster is guaranteed , as 'nationalists' will 'settle' for being treated 'better' by Westminster , whereas Irish republicans seek to remove the British presence , not co-operate with it.)
(MORE LATER). 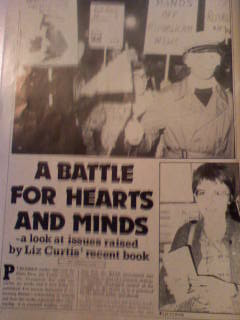 One programme which used these methods of manipulation in the crudest possible way was the Granada TV 'World In Action' programme transmitted in December 1983 , entitled 'The Honourable Member For West Belfast', which was a profile of Gerry Adams made by John Ware and Ed Vulliamy.

John Ware was already well known to republicans for his unethical standards of journalism . Several years ago he interviewed Danny Morrison for 'World In Action' , in a programme on which British 'direct-ruler' Humphrey Atkins was also to appear . When , however , Atkins insisted that Morrison's interview be withdrawn as a precondition for his appearance , John Ware agreed .

Two years later , Ware got another opportunity : in his own words to his colleagues in London , the programme he was now putting together was conceived as a 'hatchet job' on Gerry Adams . " I'm going to screw Sinn Féin and stitch up Adams , " he said . Visiting Belfast , however , John Ware told Gerry Adams and Danny Morrison that the aim of the programme was to produce "...an in-depth analysis of the rise of Sinn Féin and the allied politicisation of the Republican Movement .. " , but Sinn Féin had previously been warned by Ian Stuttard of Ware's unethical intentions , and therefore declined to take part .
(MORE LATER).

As per my stated intention , I deliberately spoiled my two ballot papers today , Friday 5th June 2009 : there was no candidate whom I considered to be principled enough to deserve my support and rather than simply not bother claiming my two ballot papers - one for the local council elections and one for the European Gravy-Train election - I claimed both and purposely spoiled both. 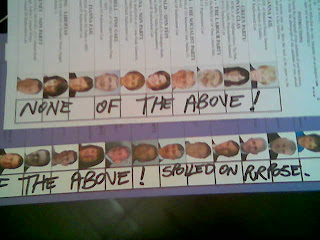 I had no hesitation or second thoughts regarding this : it is career politicians and wanna-be career politicians like those who contested seats in my area that have this State corrupted and have the majority of people here either living on the bread-line - if they're 'lucky' enough to have a job in the first place - or having to borrow from money lenders for day-to-day living expenses. Over 400,000 people are now signing-on for State benefits and I for one will not be rewarding one or more of the morally bankrupt politicians responsible by voting for them. 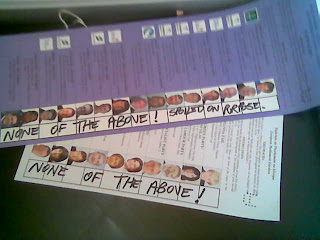 A plague on all their houses.

To those that will say something along the lines of "Irish men and women fought hard to get you the vote in the first place..." I say - No , they didn't . Those people struggled as they did to obtain democracy , fair play and justice : no man or woman that I respect sought to obtain for me or others a vote in a morally and politically corrupt Statelet , where the 'leaders' reward themselves financially with outlandish salaries and pension 'rights' while those that they beg , plead and bribe to vote for them are practically financially destitute. 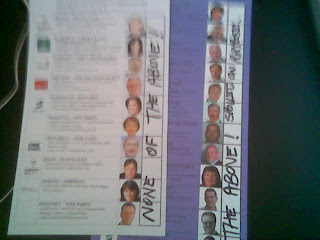 No one on those ballot papers worth voting for.

If you haven't already been to your polling station , you could do worse than to do as I have done today - actually , you could do two things worse : vote for a candidate you believe to be 'the best of a bad bunch' and not bothering at all to visit the polling station . Do visit your polling station , do claim your ballot papers , and do purposely spoil it if you are faced with the same political 'choice' that I was faced with today . A 'NONE OF THE ABOVE!' mark on those ballot papers will serve you , and the economy , much better than a vote for those you consider to be 'the best of a bad bunch' .
Thanks for reading!
Sharon. 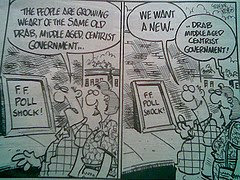 Think twice before you vote to simply 'change the management' .


A recent poll by a well-known Irish youth-oriented website , which is sponsored by , amongst other entities ,the State Department of Social and Family Affairs and the State Department of Foreign Affairs (full list of sponsors here) , has found that " Up to 70% (of young voters) won’t vote " and that this election will be " missing the ‘youth factor’. Young people in Ireland are not as uninterested in the upcoming elections as many people might think. Instead they are finding the political system inaccessible, confusing and uninspiring."
According to SpunOut.ie "....there are approximately 500,000 young people in Ireland between the ages of 18 and 25 and according to a SpunOut.ie poll, up to 70% (350,000) of these may not be voting on Friday."

Don't add to their false prestige and financial well-being by voting political leeches on to the gravy train!

For what it's worth , this blog would ask those who are entitled to vote - young and not-so-young - to claim their vote and , if a suitable candidate is not contesting for a seat in your area ,to purposely spoil that vote!

Elections to the so-called 'European Parliament' will be held in the Six north-eastern counties of Ireland on Thursday 4th June 2009 : having scanned the websites , leaflets , policy documents and stated political intentions of the candidates contesting that election in those occupied Six Counties , the only advice we can offer those intending to claim their ballot paper is to purposely spoil it by , for instance , writing 'None Of The Above!' on it and deposit it in the ballot box . If you feel that the statement 'None Of The Above!' doesn't quiet express what you think of the politically self-serving monied 'elite' that are trying to convince you to put them on to the European/Leinster House/local Council gravy train , feel free to write your own message on your ballot paper.
Elections to that same European gravy train , local councils and , in Dublin , to two vacant seats in Leinster House , will be held in the 26-County State on Friday 5th June 2009 : again , having scanned the websites of those contesting those elections , having read their brochures and leaflets and having talked to some of them on the street and on the doorstep , we again - for the most part - recommend purposely spoiling your vote . The exceptions (*) we would recommend voting for are those who look at problematic issues from an Irish Republican perspective . Candidates like these, for instance , who have made it clear where they stand in relation to the important issues and who have a political point-of-view that we on this blog are in agreement with.

If you can't use it to affect real change ,then play smart and safe : spoil it!

Finally - those of us with an interest in politics have seen this before : where we replace one set of political incompetents with the set of political incompetents - or a mixture of them - that had previously been voted out of office . The result was , and is , that they get fatter and richer while we continue to get screwed.
If we're fool enough to keep repeating the process then we deserve to be screwed.
If there are no decent , principled candidates (see above link*) contesting in your area for a seat ,then purposely spoil your vote . Either write " None Of The Above! " on it , or perhaps a shorter message of your choice...!
Thanks!
Sharon.
(PLEASE NOTE - our usual Wednesday '3-in-1' post will be held over until Saturday 6th June 2009 , which is the day after the last election on this island . We want to try and reach as many people as possible with this message and will leave it here until that date.)