The courtroom is changed to suit the Kirkpatrick case : there's a perspex screen between the public gallery and the main body of the court . The Preliminary Enquiry had ended in May 1984 in a bloody battle with dozens injured . Harry Kirkpatrick is about to go into the witness box . Defence counsel has made an application that the accused be allowed to move , but British Judge Carswell rules that each accused can move one space only and adjourns the sitting to allow that to take place . But none of the accused moves.

An observer in the courtroom was heard to whisper - " Do not pass go . Do not collect £200..." , and his friend whispers back - " Go directly to jail..." . But still no-one changes places . Harry Kirkpatrick then takes the oath and , whilst on the stand doing so , never actually looks at the person asking him the questions . He's dressed in a suit , with his collar open and the tie loose . His voice is clear and he's clean shaven , but he ever only used to shave rarely , and always used to wear jeans and combat jackets and soft bright shoes. But not now.

Up in the public gallery , there are about sixty relatives ; dozens of blue prison officer uniforms ring around the twenty-seven defendants , and green uniformed RUC men guard the judge and the court building itself . Some of these are armed . Dozens of legal people , including Desmond Boal and Paddy MacEntee, throng in front of Judge Carswell . Kirkpatrick was ready to give his direct 'evidence'.......
(MORE LATER).

In 1972 , Howard Marks was recruited to MI6 by an old Balliol College friend of his , Hamilton MacMillian, then as now a British Foreign Office Official and MI6 operative. Kirkpatrick also met James McCann, probably in Holland : McCann had escaped from Belfast's Crumlin Road Prison in June 1971 while awaiting trial on firearms charges - he had taken part in the PIRA's border campaign based in Dundalk and then went to the Continent in 1972 to organise arms smuggling for the PIRA . By early 1973 Marks and McCann knew each other well , and even took their girlfriends on holiday together.

Marks allegedly became involved with a sophisticated plot to smuggle cannabis into the USA from Europe , inside amplifiers of a non-existent pop group but the whole gang was rounded up in September 1973 by American narcotics agents . However , Marks escaped the round up and fled to Holland.

In Amsterdam his luck ran out : Dutch police picked him up in a separate drugs raid . British Customs officers brought him to London - voluntarily - where he was charged over the US drug-smuggling operation but was released on bail . That was in November 1974 . James McCann , meanwhile , had been busy raiding , as he later alleged, the West German arms dealer Otto Schleuter, in Hamburg . Schleuter , it has been alleged, was involved in the so-called '1970's Arms Crisis' in Ireland . Part of James McCann's gang made off with a cargo of machine pistols but his girlfriend and an accomplice were arrested when drugs were found at a Hamburg Hotel . McCann escaped to Holland where Dutch police tailed him . But the Dutch government told their police force to leave him alone.......
(MORE LATER).

But heroin addiction does not only affect the user . If a female addict is pregnant she is likely to pass on her addiction to the baby . Six such babies were born between 1975 and 1980 , between 1981 and 1982 the figure shot up to 17 and , the following year , there were 25 babies born that were addicted to heroin , as far as the drugs unit knew of .

Only 8% of those women were weaned off drugs during the pregnancy , 40% were maintained on the drug methadone by the unit , 30% dropped out of the maintenance programme and only 20% maintained contact with the drugs unit.

After their babies were born , 65% of the mothers returned to their original addictions , 21% were lost contact with and only 11% were rehabilitated to a drug-free state. In at least three cases in one year the State Health Board removed children from addict parents and placed them in foster care . And all this time the State and its agencies completely ignored the situation until it could no longer do so . But , when it 'intervened' , it made things worse.......
(MORE LATER). 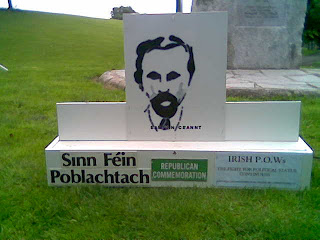 The local 'Joe McDonnell Cumann' of Republican Sinn Féin held a very successfull commemoration/wreath laying ceremony today (Sunday 26 July 2009) for Eamonn Ceannt , in a park named after the man , in Crumlin , Dublin. About thirty local members and supporters gathered at a near-by point and , at about 12.45 pm , marched to the memorial stone in that park . The proceedings were Chaired by Paddy Ennis , who welcomed the crowd and gave a brief outline of why it is that RSF honour men and women like Eamonn Ceannt. He then called on Des Dalton to deliver the main oration , included in which was a history of Ceannt and good details on the part the man played in the 1916 Rising.
We publish with this post a total of six photographs of todays event , and a link at the bottom of the post to five more photographs . A full report , and different pics , will be published in the August 2009 issue of the 'Saoirse' republican newspaper , which goes to print this coming Wednesday , 29 July 2009. 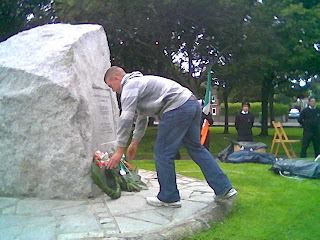 Wreath being laid at the Ceannt Commemoration , Sunday 26 July 2009.

We have posted five more pics from today on our 'Sister' site , here.
Thanks for reading!
Sharon.