RUC Detective Superintendent Mitchell and Detective Chief Inspector Meeke came into the room in Castlereagh Interrogation Centre where Harry Kirkpatrick was being held : Kirkpatrick told them he knew more than Jackie Goodman or John Grimley would know , that he "...could put a lot of people away.." but wanted immunity before he would give 'evidence' . The RUC said they couldn't do that , to which Kirkpatrick replied that not only did he want immunity but he also wanted to get out of the country.

The RUC then told him that the question of immunity would be in the hands of the Director of Public Prosecutions and asked Kirkpatrick what exactly he was involved in - Kirkpatrick hesitated , then opened-up and spent three days making statements , at the end of which he signed a form saying that he had told the RUC everything . That , too , was a lie. That was on 26th March 1982 - the date Harry Kirkpatrick 'officially' turned 'Supergrass' .

Kirkpatrick was then charged with the killing of RUC man Lyndsay McDougall and was put into the annex of Crumlin Road Prison, the 'home of Supergrasses' . Then, acting on his 'word' , the RUC went out and made wave after wave of arrests across Belfast . Men were taken from New Barnsley , Ballymurphy , Springhill , the Falls , the New Lodge Road , Andersonstown , the Marklets and Divis Flats . Most of them ended up in Castlereagh Interrogation Centre , but only one of them made a 'statement' ; naming only himself ! According to Kirkpatrick , the people he had put away comprised the entire Brigade Staff of the INLA , including the Officers Commanding of many areas.......
(MORE LATER).

A Dublin District Justice was accused by American embassy intelligence personnel of encouraging left wing agitators and tolerating hostile acts against the United States. The accusation was carried in a confidential telegram to the Secretary of State in Washington in November 1970 .

The telegram also informed the Secretary of State that the embassy "...badly needs the means to combat.." the activities of the 'agitators' and those who "encourage" them - in this case State District Justice Robert O hUadhaigh.

Traditionally , foreign diplomats who conspire to , or seek the means to, intervene in the internal affairs of their host country would , if exposed, be declared persona non grata and ejected from that country . In this case , however , its just the CIA - paranoia , incompetence and an ability to make mountains out of molehills being their trademarks . But what else can you expect.......?
(MORE LATER).

Some of the drug pushers moved their operation to nearby pubs , chip shops , pool halls and hotels , but more often than not local people followed them there and bluntly told the owners and managers that the community would oppose their licence when it came up for renewal if they didn't clear the pushers out .

RTE ran a number of major documentaries on what was happening which focussed public attention on the crisis , but RTE's desire to sensationalise every aspect of the campaign led to the community action being portrayed as mob rule and vigilante violence , and as being a 'front' - which it clearly wasn't - for the IRA.

This attitude so infuriated some local people that in many areas documentary makers were not allowed to film in those areas . The IRA's attitude to pushers and the drugs crisis was in fact spelt out in an interview given to a local newsletter produced by a Sinn Féin cumann in Dublin's inner city . An IRA spokesperson stated - " We do not believe that the solution to the problem lies in our hands. It lies with the people in the areas affected by heroin. In situations where drug pushers are living amongst the people in the areas affected we would see it as the work of those people to make life unbearable and unprofitable for the pushers." Then that spokesperson went on to issue a warning.......
(MORE LATER).

On Tuesday , 18th August 2009 , a 'Battle Honoured' (Belgian Coast 1914-1915, 'Konigsberg' 1915) British warship , the 'HMS MERSEY' , docked at John Rogerson's Quay , in Dublin. Republican Sinn Féin issued a statement on the unwanted presence of that ship , a protest was organised and, afterwards, a brief report and some photographs regarding the protest were published.

We have recently received some more photographs of the republican protest that was held, which we publish with this post : 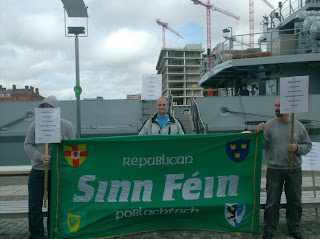 Na Fianna Éireann recently held two celebrations to mark its 100th Anniversary - one in Dublin and the other in Limerick , both taking place on the same day - Sunday 16th August 2009. Those celebrations were announced here, amongst other places , and reports on both of those Anniversary events were carried here and here.
This blog has recently received a number of photographs of the Dublin event , which we publish with this post - 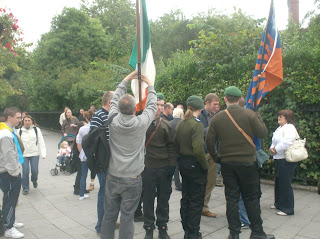 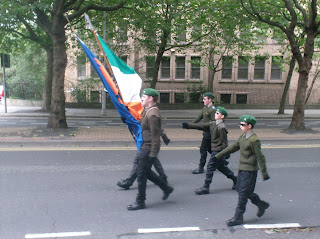 Congratulations to Na Fianna Éireann on reaching their 100th 'birthday' and on celebrating same in such a public fashion. This is one republican organisation which will continue to grow, as those that know its membership and leadership will agree : they have held steadfast to their republican principles through thick and thin and will continue to so!
Thanks!
Sharon.