One week after turning 'Supergrass' , Harry Kirkpatrick found out that he wasn't getting immunity . He changed solicitors and prepared to challenge the statements he made and was examined by a psychiatrist. He said that the statements had been extracted by threats and abuse , that he had been offered bribes and immunity , that statements of informers had been put in front of him.

He also said that he hadn't got valium at Castlereagh Interrogation Centre , as he usually did, and that he cried . Then Harry changed his mind and , also once again , changed his solicitor . He decided to plead guilty and give evidence against his friends . This happened on 19th January 1983 ; between 2.30pm and 3pm that day , Gerard Barkley came to see him . As Barkley left , his RUC friends arrived and he told them of his change of mind and denied that he told Barkley that he was going to turn and to get off side . He also denied passing a note to his wife which read - "things are going my way now."

In the following months , his wife was kidnapped by the INLA to try and get him to retract , and his step-father and sister were also held by the INLA . In June , he pleaded guilty to seventy-seven counts , including five killings . He received five life sentences , with no recommended minimum . Twelve days later he was again back in court , apparently at his own request , to clear one outstanding matter - the killing of UDA member William 'Bucky' McCullough. British Crown counsel got up and said that since Kirkpatrick was in prison at the time of the killing of William McCullough , all charges were being dropped against him . Kirkpatrick now had a clean slate regarding that issue but the strange thing about that is that Kirkpatrick was not in prison at the time . Nonetheless , the British decided not to proceed with charges in that case , meaning that there were now no outstanding charges against Kirkpatrick.......
(MORE LATER).

The telegram is just one of over a hundred secret documents recently obtained from US intelligence agencies under the Freedom of Information Act : the documents give an amusing and sometimes incredible picture of the absurdities indulged in by the intelligence agencies while trying to justify their budgets and assuage their fear of dissidents. They also demonstrate that the US tax payers are getting lously value for their money!

In September 1972 Mairin de Burca , then Joint Secretary of Official Sinn Féin , sought a visa to go to the United States but was refused on the grounds of "moral turpitude" . It subsequently dawned on de Burca that she didn't need a visa - her parents were naturalised US citizens and she could therefore claim American citizenship . This she did and she was thus able to visit the US in 1976 and to speak at a number of meetings there .

In 1977 she left Official Sinn Féin , dropped out of politics and shortly afterwards became a journalist . Some time ago , on a whim, she wrote to Washington demanding access to any files that might have been kept on her political activities in the 1970's . Under the Freedom of Information Act , which was passed after the agencies had been caught breaking the law once too often while snooping , any US citizen is entitled to scrutinise copies of any files being kept on her or himself. While refusing to release 40 of the documents and heavily censoring most of the rest (usually in order to protect informers) the spooks released enough information to show the determination with which they keep files on Irish individuals and politicians - and their level of incompetence at so doing.......
(MORE LATER).

The IRA spokesperson then drew a clear line between local pushers and those who organise and finance the distribution of drugs : " There are , however, some characters operating who will never be affected by community action since they do not live anywhere near where the problem has taken hold. These are totally cynical and callous business people who will exploit unscrupulously to fill their own pockets. We issue a strong warning to those people that they will not be safe , no matter where they live. They are the ones who are making vast profits from the misery of young people, and we are keeping a constant watch on them."

Four Dublin men are currently serving sentences of up to nine years in Portlaoise Prison, related to a kidnapping that was aimed at combatting gun attacks on anti-drugs committees by organised drug pushers. Meanwhile , dozens of well-known heroin pushers are permitted by the gardai to walk the streets of Dublin freely plying their trade of death.

There are now 62 gardai assigned to that force's Drug Squad , compared with 45 up until September 1983 and only 20 in 1981. There is precious little evidence , however, that this extra manpower marks a serious commitment to dealing with the source of the problem - the organisers of the drugs racket . Indeed , what little success they have had serves better to illustrate the increase in drug abuse that is exploding in all major cities.......
(MORE LATER). 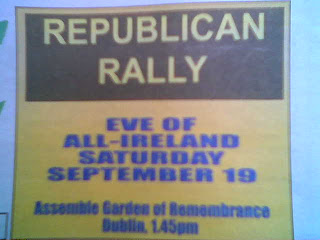 "One of the largest public rallies seen in Dublin for years was held by Sinn Féin at the GPO on the eve of the All-Ireland Football Final . Headed by a Colour Party and a pipe band , a parade of more than 2,000 people marched from Parnell Square through the main city thoroughfare as a protest against the continued unjust imprisonment of Irishmen without charge or trial .
Contingents from all over the country took part and many carried banners and placards including groups from England and Scotland . In the Ulster section was a strong representation of the Derry supporters who thronged the capital city for the Final . One placard they carried asked - ' Why are Six-County Nationalists interned in the Curragh?' ....."
(From 'An tÉireannach Aontaithe/The United Irishman' newspaper , November 1958)

The Annual Eve Of All-Ireland Rally will be held this year on Saturday 19th September : those attending are asked to assemble at the Garden of Remembrance in Parnell Square at 12 Noon from where the parade will leave for the GPO. All Welcome!
Thanks!
Sharon.