(Also : Former Prime Minister of Malta asks for a 'No'vote on October 2nd.)

Professor Dr. Karl Albrecht Schachtschneider , who will be speaking at 'Vote No To Lisbon' meetings in Dublin and Galway between September 21st and 23rd next.

University Professor Dr. Karl Albrecht Schachtschneider, Nuremberg (Germany) who led the challenge to the Lisbon Treaty at the German Constitutional Court - the court challenge has resulted in Germany having yet to ratify the Lisbon Treaty - will be visiting Ireland to lend his support to the campaign for a 'No' vote.
He is coming to Ireland at the invitation of Republican Sinn Féin from September 21 to 23.
On September 21 he will address a press conference in Buswell’s Hotel, Molesworth St, Dublin at 12 Noon.
That evening he will be the keynote speaker at a public meeting in Wynn’s Hotel, Middle Abbey St at 7.30pm.


Prof. Schachtschneider, as an expert in European and Constitutional Law, will speak in particular on the new EU 'guarantees' and what they really mean for Ireland and also what are the consequences of the judgment of the German Federal Constitutional Court?
The next day he will travel to Galway where he will address a meeting in The Imperial Hotel, Eyre Square at 8.00pm.

Biography of Karl Albrecht Schachtschneider, Nuremberg, Germany : he was Born on July 11, 1940 in Hutten/Pommern (in province of what was then East Germany) ,and received a School-leaving certificate in classical languages in 1960 in Berlin. He studied law at the universities in Berlin, Bonn and Tubingen. In 1963 he received his first State Certificate in Law at Berlin and in 1969 he received his second such State Certificate there. Also in 1969 , he obtained the degree of Dr Jur at the Free University of Berlin.
In 1986 he was inaugurated in constitutional law and administration and for private and public law of economics at the Special Branch for the Science of Law in Hamburg.

In numerous books, scientific articles, court proceedings and public speeches he has analysed globalisation and its consequences in a critical way and has stood up all the time firmly for freedom and the civil rights of people in opposition to corporations and the state.
It is due to his several legal actions on EU treaties at the Federal Constitutional Court in Karlsruhe that the President of the Federal Republic of Germany has yet to sign the Lisbon Treaty for ratification in Germany. In Austria he has acted on behalf of a civil rights committee taking legal action.
Professor Schachtschneider gave voluminous written evidence to the constitutional court in Vienna in October 2008 stating why all EU treaties violate the national constitution of the Federal Republic of Austria.
Please note that there is no admission fee to either of these meetings and all are welcome!
Thanks!
Sharon.

Harry Kirkpatrick could remember none of the details regarding the UDA member William 'Bucky' McCullough incident during his court 'trial' of the 27 colleagues that he had named to the RUC ; in fact , Kirkpatrick said he could remember nothing of what happened to himself between March 1982 and January 1983 !

British Judge Carswell stated- " This lack of recall is in striking contrast with the precision of Kirkpatrick's recollection , as retailed in his evidence , of the events in which the various defendants have been implicated by him. It leads one to the conclusion , as defence counsel argued, that either his memory for those events cannot be as good as he professes or his evidence about his lack of recollection of 1982-1983 is untrue."

Carswell went on to say that Kirkpatrick was "...giving deliberately false evidence.." and that in not admitting he had asked for immunity , he may have thought or was advised that to admit it "...would discredit him in the eyes of the court.." . Carswell considered that Kirkpatrick's decision to give 'evidence' contained ('perhaps') "...a substantial element.." of self-interest , in the hope of early release , and that this still constituted a significant part of his motivation. He concluded that Kirkpatrick had tried to conceal his motivation from the court and had "...been prepared to lie to do so.." and stated that Kirkpatrick had been "...extremely wary and defensive.." in cross examination , that he had had "...a great reluctance to admit anything.." , that he had tried to "...avoid being tripped up.." and that he had avoided "...admissions which he thought would
be damaging.." . And finally , Carswell stated - " I could not accept that he is now motivated by an overwhelming desire for the trurth."
(MORE LATER).

On the afternoon of 28th September 1976 , Mairin de Burca addressed a meeting of about 60 people in Room 1002 , Sonoma State College , California: the meeting was advertised under the title 'Irish Women's Rights' and was one of a series of meetings being organised by feminists at the college. Mairin de Burca was addressing a number of meetings organised across the state of California , by 'Republican Clubs' and other like-minded groups.

At each stop on the itinerary , from New York to Los Angeles , the FBI had their agents pumping vast amounts of paper , most of it routine and irrelevant , into the de Burca file . This consisted for the most part in reports of meetings and speeches but , at Sonoma , the US Justice Department decided to go further - they wanted to 'put a spoke into the de Burca wheel' . Two FBI agents were sent to Room 1002 to serve forms demanding that de Burca register as "...an agent of a foreign power.." . This is where the whole farce began.

As the Sonoma meeting was about to start , one of the students , Kathy Parker , rose and addressed the gathering - " If there are any law enforcement officers present will you please make yourselves known and tell us your business here." The students were suspicious that their meeting was under surveillance ; one man spoke up - he was Tom Blavett , campus security officer . And why was he here , he was aked ? Well , Blavett explained, it was raining outside , you see, and he had come in out of the rain . No other reason , he said . That was all . Honest , he said. But the two FBI agents in the room said nothing.

They simply noted Blavett's admission and carefully noted his name for their files. But they spelled it 'Thomas Bovet' . But there was a twist - at the end of the meeting , Tom Blavett approached Kathy Parker and admitted that he had lied about coming in out of the rain for shelter . Actually , he said , he had been sent to the meeting to keep an eye on the two FBI agents ! The meeting proceeded and the students and de Burca discussed Irish women's liberation , or lack of it . THE FBI agents listened carefully to de Burca and noted what they considered to be the relevant points . " Observation of those in attendance," they wrote , " disclosed the audience to range in age from elderly grandmother-grandfather types to very young college age types..." They then entered a note marked ' Confidential' into their files.......
(MORE LATER).

There can be no doubt that the State Drug Squad has had some success : three years ago 4.4 million pounds worth of cannabis was seized in one sweep at Dublin's docks , and in February 1983 300,000 pounds worth of heroin was netted in a raid in Ballymun.

However, as well as illustrating the massive explosion in drug usage over the past few years , the numbers charged suggest another disturbing trend - the tendency to concentrate gardai attentions on individual addicts , and their apparent reticence to tackle the big pushers , most of whom operated with impunity until the local community began to take action. The most glaring display of this reluctance was shown by the case of the Dunne family, members of which were widely known to be key figures in the Dublin drugs circuit for a very long time before charges were laid against them.......
('1169...' Comment :then , as now , both addict and pusher were used by State forces as their low-level 'eyes and ears' on the ground. They were allowed use and sell drugs provided they gave regular tip-offs (on the comings and goings of local Republicans , for instance) to local gardai 'minders' , who tried to use the information they received to promote their career prospects within the garda organisation.)
(MORE LATER). 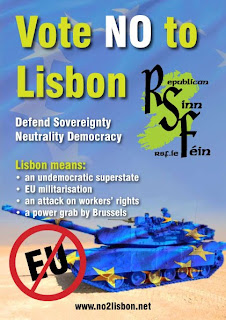 The millionaire politicians in Leinster House are not happy with their lot (paid for by those of us who are stopped tax out of our earnings, incidentally) and they need more income to secure their non-productive and fine lifestyle for themselves and their families in the manner they have become accustomed to. As is usual in cases like this , they themselves will not directly seek to take more from their 'subjects' but will instead set-up a 'Committee' to do the dirty work for them - then , when they implement all or most/some of the 'recommendations of that Committee' , they will, they hope, be seeing to do so at 'one remove' from the cutbacks/extra taxes etc that they pass into State law. And that is what has happened today : a 'Committee' has advised that more money should be removed from the pockets of those in this State who are lucky enough to have a job in the first place, by the following means - an annual property tax on all residential property , child benefit should be a taxable income , removal of tax relief for nursing home expenses , domestic water charges should be phased in and income tax relief for trade union subscriptions should be ended.
Altogether,more than 240 such measures were 'recommended' by that 'Committee' , all of which focussed on 'raising revenue through property taxes, spending taxes and income taxes...'
If you are eligible to vote in this corrupt State then make sure you do so on October 2nd next and vote 'NO!' to the Lisbon Two Treaty/Constitution : if you vote the way the establishment politicians want you to vote they will interprete that 'yes' vote as a vote in favour of their intention to take even more taxes from you. No to Lisbon Two , No to extra taxes !
Thanks!
Sharon.