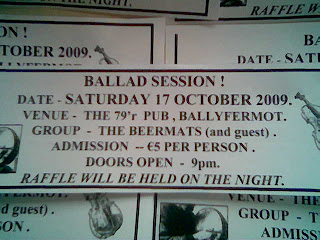 A Ballad Session will be held in the 79'r pub in Ballyfermot , Dublin , on Saturday 17th October 2009 - The 'Beer Mats' Ballad Group have been booked , doors open at 9pm , admission is €5 per person and a raffle will be held on the night. All Welcome!
Thanks!
Sharon.

The Trouble With Harry / CIA Slams Irish Judge / Fighting Back - Heroin In Dublin / Lord and Lady O'Donoghue Exposed and Deposed.

In March 1982 , Harry Kirkpatrick signed a statement saying that he had told the RUC everything he had been involved in . But that was not the case. He made more statements in the following years implicating more people , and one of those 'new statements' related to a 'conspiracy to kill an RUC member' at the Royal Victoria Hospital - the three men he accused of being involved in that 'conspiracy' were all convicted and imprisoned as a result.

During a robbery , Kirkpatrick denied that a struggle took place at the Royal Victoria Hospital , but that version was contradicted by witnesses at the scene . He described the shooting of a UDR man by Gerard Steenson and Gerard Barkley in December 1980 ; according to Kirkpatrick , both men ran back towards the car , but independent witnesses say that only one man was involved in the shooting and that there were two men in the waiting car . So Kirkpatrick changed his 'evidence' on this in 1984 , realising that he must be wrong. Gerard Steenson was convicted anyway.

Kirkpatrick said that there was an attempted robbery at the Royal Victoria Hospital on a certain date , even though there was no evidence to suggest that this event had ever taken place . Gerard Steenson was convicted of this , too. Then Kirkpatrick gave 'evidence' about a post office robbery in late 1980 in which he claimed to be involved.......
(MORE LATER).

The FBI agent's accuracy is such that should he ever be fired for bugging the wrong presidential candidate he is assured of a job with 'The Irish Independent' 'newspaper' : he gave this explanation of the "outbreak of conflict in 1968" - "...in 1968 a march for unity in Ireland was held and Great Britain provoked a military attack ....Great Britain sent armed police to loot and to kill Irish citizens.." Irish people are of the opinion that the "armed police" (ie the B Specials and the RUC) were already in Belfast at that time!

The FBI report includes references to " The Irish Republican Party , the National IRA , the IRM.." , and other mythical groupings , all of which help to explain the blundering US foreign policy in relation to this issue : when they have to make a decision about Iran , Vietnam , Chile , Cambodia or any other of their disaster areas , they consult their files - which are put together by the agents who filed the above.

Such mass gathering of routine 'facts' and diverse information is a standard practice , indulged in even by the Special Branch here , and is known as gathering 'low level intelligence' and , given the cerebral facilities of the people involved in it, this seems a most appropriate term.......
(MORE LATER).

The Free State Minister for Health, Barry Desmond, at a conference on drugs held in February 1984 , announced two measures : that he "...would sponsor an informal meeting of the health ministers of EEC countries , and that half of the agenda I would propose to devote to the problem of drug abuse.." and " ...that a national (sic) co-ordinating committee on drug abuse be set up.."

Neither of these measures will go anywhere near tackling the problem in a meaningful fashion . The proposed co-ordinating committee is a worthy idea, but in reality it is only giving a new name and more formal structure to the 'Task Force on Drug Abuse' that already exists . Of course , in Free State politics , it's not doing something but giving the impression of doing something that counts. At that same conference , Barry Desmond echoed the claims made by the sensational media , and denied by local communities , when he alleged that "...paramilitaries are cashing in on the drugs problem in Dublin."

Whether he meant to imply that republicans were materially involved in drug pushing (which everyone, including Barry Desmond , knows is untrue) or whether - with an eye on (P) Sinn Féin's strong showing in last December's Dublin Central by-election when it outpolled the Labour Party - he was referring to the involvement of individual republicans in the anti-drugs campaign at community level, was deliberately left ambiguous . Less ambiguous, however , is the real reason for his 'concern'.......
(MORE LATER). 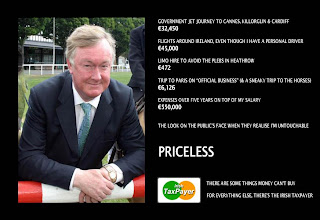 Just as Sir O' Donoghue did with his expenses - 'click to enlarge': he clicked his heels as many times as he liked and was magically transported to anywhere in the world he wanted to go , with Lady O' Donoghue in tow , at no expense to himself. He stayed in the finest hotels and ate food fit for a king , as did all who travelled with him. And it didn't cost any of them a cent. Mr O'Donoghue and his like are a symptom of the problem , not the cause of it : the root of the festering sore which gives us the O'Donoghue's of this corrupt Statelet is Leinster House and the political pirates who sail in her. They can be removed one-by-one (Ahern, Haughey and Lowry, to name but three) but, in our opinion, the whole 166 of them , and their 'support staff' , should be rounded-up and - at the very least - sent to prison after they have re-paid the State funds they robbed , with no 'Golden Parachute' pay off and, obviously, no pension. This didn't happen to them and it won't happen to Lord O'Donoghue either. We have only postponed solving the issue of State corruption. Again.