Ice cold wind, heavy , torrential rain , dark watery skies - that was Friday morning , November 6th , 2009 , in Dublin : but nature isn't going to hold back this tide!
RSF people arrived at the Church of Our Lady of Lourdes in Dublin's Seán McDermott Street at about 1.15pm , as arranged, to meet up with approximately 100 of the thousands of Community Sector workers in this State who have been notified that their jobs are to be "axed" - in a toss-up between paying these workers an average of €450 for a 39-hour week and bailing-out bankers and building speculators , the politicians decided to help their business colleagues. The Community Sector workers are to be thrown back into unemployment.

Community workers in Seán McDermott Street , readying themselves to join the protest march.

'Jim Larkin' addresses the crowd at the side of the Church in Seán McDermott Street.

Between approximately 50,000 and 70,000 Community Sector workers and their families protested in Dublin today against being forced to pay for the financial robbery inflicted on society in this State by the politicians in Leinster House and their equally dense-and-greedy well-fed-and suited colleagues in the 'business' establishment . Their friends in the media are , as expected, attempting to 'play down' the massive levels of support that Community Sector workers have in their communities and are attempting to present those workers as an unrepresented minority.

Republican Sinn Féin has marched before with the Community Sectors workers , and will take to the streets again with them whenever the opportunity to do so arises : they are seen as 'the lowest of the low' by the political establishment in this State and are considered to be 'easy pickings' in regards to being sacrificed for the financial sins of others. We owe it to them , to ourselves and to common justice to stand shoulder-to-shoulder with these people and we are committed to doing so.
Because it is the right thing to do.
Thanks!
Sharon.

Harry Kirkpatrick named four men who he claimed were involved in "conspiracy to murder" in 1981 : however , in his earlier statement to the RUC in relation to this 'incident' , Kirkpatrick never once referred to Henry McNamee, a republican , whom he now named as being involved. A 'Mr Molloy' made a statement about the incident in which he said that the workers of the factory where the "murder" bid was to take place were lined up against a wall and that there was a British Army helicopter and a British Army Saracen outside the factory ; some of those workers were in the court and they laughed loudly at this point , as it was a complete pack of lies. Nobody was "lined up against a wall" , there was no helicopter , there was no saracen . But still four men were convicted of "conspiracy to murder" .

Kirkpatrick claimed that shots were fired at an RUC barracks on May 21st , 1981 . There was no evidence of shots being fired , or of the barracks being hit by gunfire , or even a report from the RUC themselves of coming under attack or even hearing shots. But again - on the 'evidence' of Kirkpatrick - two men were convicted of "conspiracy to murder".

Kirkpatrick then 'gave evidence' of how himself and three others took over a house to ambush the RUC.......
(MORE LATER).

Many are the remarks that have been made about State Justice Robert O hUadhaigh's conduct of his court and we are not going to make him blush with modesty by adding to them here.

Suffice it to say that if awards were to be given for liberalism , O hUadhaigh's mantlepiece would not groan with the weight of such baubles. To the spooks in the U.S. intelligence agencies , however, it would seem that if he is not actually a fully paid-up KGB man then he is not above doing a few cash-in-hand nixers for the Comrades ! The CIA file on Mairin de Burca included this bit on 'Red' O hUadhaigh-

" These extraordinary lenient sentences typify not only permissiveness with which dangerous left-wing agitators in Ireland are being encouraged but also toleration of hostile acts against the U.S. in this country which the Embassy badly needs the means to combat."
(MORE LATER).

Tony Barry : "How many were pushing the heroin ?"

Noel Sillery : "In this flats complex , I would say there was only one main person in the area , plus there were three or four smaller pushers working for him. The way it was organised was that, for example, you'd see this person , the main pusher, walking across the football pitch , dropping a package , and walking on over to the corner and keeping an eye on it. Then one of the known drug pushers would come along and pick it up."
(MORE LATER).

Congratulations (and 'Thanks'!) to Ruairí Ó Brádaigh and to Republican Sinn Féin Poblachtach. 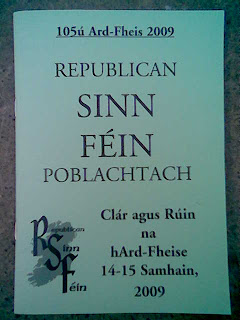 On November 14th and 15th this year , the Republican Sinn Féin organisation will hold its 105th Ard Fheis in a Dublin venue - and will say " Slán go fóill anois" to its President , Ruairí Ó Brádaigh. Ruairi , whom we on this blog have had the pleasure and honour of meeting on countless occasions ,is a dedicated Irish Republican who is as politically honest as the day is long (a saying he uses himself in relation to other people!) and has never sought or fought for any political objective other than a 32-county socialist Irish Republic , free of British political and military interference. He - and fellow Irish Republicans - have been imprisoned , harassed and censored , amongst other disgraces , by their pro-Westminster and Leinster House enemies but have never faltered or compromised. Nor will they now , which is why this blog is so supportive of Irish Republicans of that calibre. We wish Ruairi and RSF best wishes , and offer our appreciation to them for the fantastic work they have done , are doing , and will continue to do. Ruairi will still be on the Ard Chomhairle of RSF , and has been nominated as Patron of the organisation. An Phoblacht Abú !

We have obtained two 'Visitor Passes' for the 105th Ard Fheis,where political motions , such as the following examples , will be put forward for discussion and accepted or rejected , as the case may be :
"That this Ard Fheis recognises the outstanding contribution that Ruairí Ó Brádaigh has made to Irish Republicanism and commends his selfless commitment to the goal of a United Ireland."

"That this Ard Fheis acknowledges that resistance to the British presence in Occupied Ireland must continue unabated to remove that presence no matter how long it may take."

"That this Ard Fheis calls for a total British disengagement from Ireland , the release of all political prisoners and the future of Ireland to be decided by the people of Ireland acting as a whole unit (32 Counties) . "

"That we actively oppose all British Royal visits to any part of Ireland while Ireland remains under British occupation."

"That this Ard Fheis congratulates all Republican prisoners and their families in the struggle for Irish freedom."

In total , 112 motions will be discussed at this Ard Fheis and , whilst we hope to publish a general report from same , we will not be publishing a detailed report , as the matters concerned are , for now, internal RSF matters. We respect that stipulation , and wouldn't have it any other way.
Thanks!
Sharon.