IRISH REPUBLICAN PRISONERS ARE NOT CRIMINALS.....
...and Irish Republicans will not stand by while the Free State administration attempts to treat them as such.

Portlaoise Prison protest : the Free State regime are attempting to place Irish Republican POW's on the same prison landing where criminals are presently incarcerated in Portlaoise Prison. A protest against this injustice will be held outside the prison on SATURDAY 23rd JANUARY 2010 from 10am to 4pm.
All those concerned about this latest attempt to criminalise the on-going struggle to remove the unwanted British political and military presence from Ireland are asked to attend this protest. We have political prisoners because of this political conflict ; they are not 'criminals' and we will not stand by as attempts are made to treat them as such.
Portlaoise Prison protest, Saturday 23rd January 2010 , 10am to 4pm.

After a peaceful Civil Rights march on January 30th , 1972 - from Creggan to Free Derry Corner - units of the British army Parachute Regiment opened fire with automatic rifles and shot dead 13 unarmed civilians , injuring many more . It was later revealed that some days prior to the massacre , the British soldiers involved had been briefed to "...shoot to kill.." at the march .

" This Sunday became known as 'Bloody Sunday' and bloody it was . It was quite unnecessary . It strikes me that the (British) army ran amok that day and shot without thinking of what they were doing . They were shooting innocent people . They may have been taking part in a parade which was banned , but that did not justify the troops coming in and firing live rounds indiscriminately . I would say without reservations that it was sheer unadulterated murder . It was murder , gentlemen . "
- the words of British Major Hubert O'Neill , Derry City Coroner, at the conclusion of the inquests on the 13 people killed by the British Army on Bloody Sunday .
On Saturday January 30th next , a picket to mark the 38th Anniversary of that massacre will be held at the GPO in Dublin , from 12 Noon to 2pm . All welcome !
Thanks!
Sharon.

" Republicans, however , have always endeavoured to expose the contradictions of British leaders who, while directing their dirty war in Ireland, brazenly attempt to tell the world that "the rule of law" and "due process" are in operation in her courts.

Another aspect of this hypocrisy is 'moving the goalposts' by ministerial order as was done with the announcement of the re-imposition of restricted elections in the Six Counties by the introduction of political test oaths designed to exclude Republicans from public life at local council level.

A similar political test oath kept Republicans out of the councils in the Six Counties from 1922-1973 and the complete failure of such undemocratic restrictions - and Republicans deny the claim of Britain to pass any laws for any part of Ireland - can be seen in the continuing state of revolt there for the past 20 years. Opposition to British rule , far from being smothered by restricted access to unfair elections , blazes up in other and more active means of struggle .

The British , it seems , cannot learn the lessons of history and are therefore condemned to repeat them , to all our costs....."
(MORE LATER). 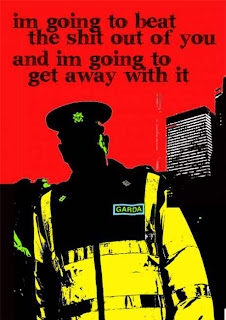 A quick phone call to the person in charge confirms that , yes , there is in fact an incinerator and everything is destroyed by exposure to massive temperatures .

There is no history of raids as the drugs are transported , no reports of evidence going missing and no 'mini-incinerations' in the van on the way there . According to the official line , that is. But we've all heard tall tales before.

Tony Barry : " What has been the result of the action the community has taken ? "

Any drug addict wanting help is given great moral support . They are accompanied down to Jervis Street by two of our lads , we stay with them while they are treated and they are brought back again. We have tried to do as much as possible for our drug addicts . We aren't running a negative campaign , its purpose has also been to try to help. "
(MORE LATER).

Fund-raiser for Na Fianna Éireann to be held in Dublin , February 2010...


A ballad session to raise funds for Na Fianna Éireann will be held in the 79'r pub in Ballyfermot , Dublin , on Saturday 6th February 2010....

Pato Cullen , during one of his many radio interviews.

...local balladeer legend Pato Cullen will be joined on stage by equally-talented singers of Irish ballads for what promises to be a fantastic night !
Admission tickets (at €5 per person) are available from the usual sources (and 30 are being held back for sale at the door on the night) , doors open at 9pm , and a raffle for various Irish Republican items (bodhráns,t-shirts etc) will be held during the break.
All Welcome !
Thanks!
Sharon.