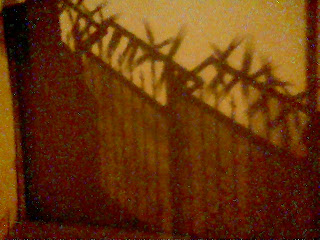 REPUBLICAN PRISONERS DEMAND RIGHT TO ORGANISE THEIR OWN LANDING.
Statement from the Republican Sinn Féin PoW Department:
"The denial of a separate landing for the CIRA PoWs in Portlaoise prison is part of a policy to criminalise the continued Irish Republican resistance to British rule in Ireland. Since 1917, 22 Irish Republicans have died in defence of their right to political status.
In the 1940s the Republican Prisoners in Portlaoise were among the first ‘Blanketmen’ in opposition to criminalisation. In the 1970s Republican prisoners endured a 47-day hunger strike.
The Republican prisoners in Portlaoise today are defending the same right to political status because they are part of the same struggle.
The CIRA prisoners demand their right to a separate landing. The CIRA PoWs' demand is simple – they want to continue to be treated as political prisoners - as other groups in the jail are."

IRISH REPUBLICAN PRISONERS ARE NOT CRIMINALS.....
...and Irish Republicans will not stand by while the Free State administration attempts to treat them as such.

Portlaoise Prison protest : the Free State regime are attempting to place Irish Republican POW's on the same prison landing where criminals are presently incarcerated in Portlaoise Prison. A protest against this injustice will be held outside the prison on SATURDAY 23rd JANUARY 2010 from 10am to 4pm.
All those concerned about this latest attempt to criminalise the on-going struggle to remove the unwanted British political and military presence from Ireland are asked to attend this protest. We have political prisoners because of this political conflict ; they are not 'criminals' and we will not stand by as attempts are made to treat them as such.
Portlaoise Prison protest, Saturday 23rd January 2010 , 10am to 4pm.
Thanks!
Sharon.

" This also applies to the Broadcasting Ban which , like Mr Collins' censorship law in the 26 Counties , specifically names our organisation , to the reduction of remission for political prisoners , the ending of the right to silence and the making permanent of the rascist 'Prevention of Terrorism Act'.

We would point out that the very first victims of the 'PTA' 15 years ago were Gerard Conlon , Carole Richardson , Paul Hill and Patrick Armstrong , known to the world now as the 'Guildford Four' and whose release from their living hell in British jails this week we have welcomed.

We recognise however that the British are cynically using Irish prisoners in this instance as bargaining counters in their security conferences with the 26-County administration to guarantee continued collaboration from Dublin. The Free State, for its own part , engaged in similar shadow-boxing the week before despite having handed over Gerard Harte, Robert Russell and Paul Kane in successive political extraditions to their political masters in the past 14 months."
(MORE LATER).

BETRAYAL.
The (State) Gardaí used John Corcoran (pictured) as a (P)IRA informer. They allowed him to be killed by another (P)IRA informer, and have since refused to investigate his murder*.
From 'MAGILL' magazine, Christmas Annual 1997.
By Ursula Halligan and Vincent Browne.
(* '1169...' Comment - their word, not ours.)

There is evidence that the gardaí knew in advance of IRA plans to murder * a Cork man in 1985 and that , although they were aware of where the man was being held, they failed to intervene to save his life.

In addition, there is substantial evidence of garda reluctance to investigate the murder * , including a failure on their part to interview a man who has acknowledged his part in the murder * and supplied details of the circumstances surrounding it.

There is evidence of ongoing garda reluctance to investigate this case in spite of a direction by the new (State) minister for justice, John O' Donoghue, to present a full report into the affair . There are even suggestions that gardaí may have "authorised" the murder * of this man , in order to protect the identity of one of their prime informers.......
(MORE LATER).

Tony Barry : " What do you think is the role that the 26-county administration can play in this ? "

Noel Sillery : " If you had a half-decent administration they would and should have a role to play , but they don't give a damn. As far as we can see , with all the harassment we've received, it seems that they nearly want the drug problem in our area. If it moved out into middle-class areas it would be solved in half the time.

So far as the cops are concerned , the drugs problem makes their jobs easier. All they have to do is pick up one or two addicts , bring them in for a few hours , milk them for all the information they can get and then let them go."