TWO FUNCTIONS IN DUBLIN , ONE OBJECTIVE :
TO SUPPORT , STRENGTHEN AND EXPAND IRISH REPUBLICANISM.


This weekend ,in a venue on the Dublin/Kildare border , the monthly raffle will be held , at which over 600 tickets will be sold and over €400 in prize money will be won : the profit made from this raffle , which has been held on a monthly basis since the late 1970's , will go to the CABHAIR POW support group and, as usual , no expenses and/or admin fees etc will be deducted. 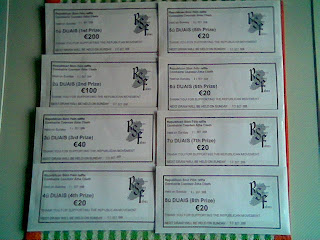 Over the 20-odd years that this raffle has been held , it's not only the prize-money and amount of tickets which have been changed (both increased , incidentally!) but the method by which it is actually held ; from this - 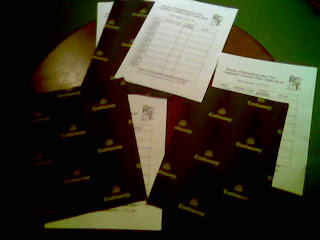 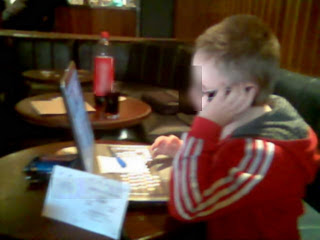 ...the electronic version of carbon paper , as used by one of the young helpers at the monthly raffle!

The result sheets are still now duplicated and filled-in with sheets of carbon paper between them but , for the most part , laptops and mobile phones are employed to spread the news of the results , practically within seconds of each of the eight winners becoming known! Such is 'progress'(?).......

And the second fund-raiser :

Although there are other 'projects' in the pipeline , the 'Big One' in Dublin will undoubtedly be the Hunger-Striker Commemorative Function which , as shown in that link , will be held on Saturday 8th May 2010 in the 79'r pub in Ballyfermot.

Tickets for the May 8th function are available from the usual Republican sources and outlets , €5 each, and are selling very fast. It is a mark of the political and professional competence of those behind both of these functions (and other such Republican events) that ,despite the financial recession and State harassment ,they are not only able to organise and hold such functions but that they can make a profit for the Republican Movement , in doing so. They are to be congratulated and admired for doing so , yet all they ask in return is a date and venue for the next meeting at which future gigs will be organised. Unsung Heroes , for sure!
Thanks!
Sharon.

" Britain had simultaneously been found in breach of the European Convention of Human Rights for the seven-day detention powers in the 'Prevention of Terrorism Act', giving her the worst record on Human Rights in Europe with 21 violations since 1950. Pleading "a state of emergency threatening the life of the nation" , they derogated from the European Treaty as they did with internment in the Occupied Six Counties from 1971 to 1975.

Did this not influence the decision on extradition in Leinster House ? Not in the slightest , for the Dublin administration's own Emergency Provisions Act (1976) also provides for seven-day detention without trial and, as the British would not be slow in pointing out to their clients in Dublin , how can the kettle call the pot black ?

It is the legacy of two failed political entities in this partitioned island , north and south, that makes it impossible to rule in either area without continual breaches of human rights. In the 26-County state this collaboration with British rule has far-reaching effects on the lives of ordinary people....."
(MORE LATER).

When controversy arose earlier this year over Séan O' Callaghan's role in the murder* of John Corcoran and the garda failure to question O'Callaghan in connection with the incident , the then Leinster House opposition Fianna Fáil spokesman on justice , John O' Donoghue, promised to have the matter "fully investigated" on the party's return to power.

In a statement issued to 'Magill' magazine on Monday December 8th 1997 , the (State) Department of Justice stated - "Within weeks of coming into office , the minister [John O' Donoghue] sought a full report on all aspects of the O'Callaghan case from the garda authorities . As of yet he is awaiting that report . He [O'Donoghue] understands that the report is imminent."

The claim that the report into this affair is "imminent" is surprising , given that Séan O' Callaghan confirmed to 'Magill' magazine on the previous day (Sunday December 7th 1997) that he had not been interviewed by gardaí or by anybody else in connection with the murder* of John Corcoran and that no attempt had been made by the gardaí to even contact him.......
(MORE LATER).

Brian Maguire died in RUC custody after a strenuous interrogation which his friends and family allege involved repeated semi-strangulation . The RUC attempted to suggest that Brian Maguire hanged himself from a ventilation grille in his detention cell but previous victims of the seven-day detention orders in Castlereagh observed that the grilles in question were inaccessible - being some 12ft from the floor - and anyhow, the grilles were of a size which did not permit anything being tied to them.

Most Irish people , and trade unionists in particular, believe that Brian Maguire was murdered by the RUC Special Branch ; he 'missed' his place on the conveyor belt system which leads from Castlereagh into the H-Blocks . His death gave a new urgency to the anti-repression struggle and provided fresh impetus for trade union involvement in the prison issue.......
(MORE LATER).

TIME IS ON THE SIDE OF NA FIANNA ÉIREANN ! 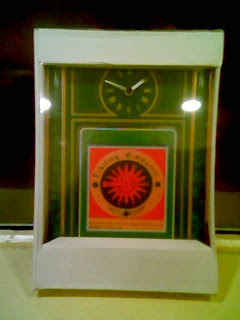 The NFÉ fund-raiser , held last night (and this morning!) [Sat/Sun 6th/7th Feb 2010] in the 79'r pub in Ballyfermot was more of a success than the organisers were prepared for : extra chairs had to 'borrowed' (!) from the downstairs bar (and smuggled up as best as possible - extra headache for the RSF bouncers!) and 'extra' stage entertainment had been organised , a fact which the local organising committee kept secret as they knew they had more than the fill of the place as it was, from local people and, as such , there was no point in advertising the 'extras' any further afield , as there simply wouldn't have been space available for an influx of 'outsiders'! 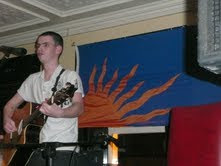 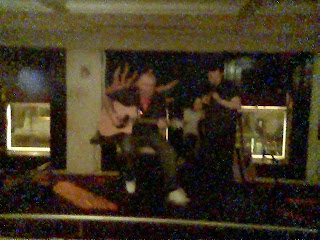 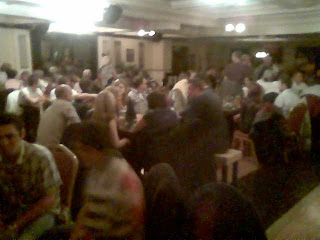 Crowd scene-at the start of the night!

As well as the ever-brilliant Pato Cullen , Peter Kerins and Friends were on stage for about an hour , as were Bruscar , Celtic Wing , Paddy Kennedy ('The Lonesome Whistler'!) and - sly dogs that they are for keeping this one 'under wraps' - the unbelievable Chris Carney, who again stunned all in the venue and even had the bar staff out on the floor , from behind the counter, to get a better vantage point.
Actually , at one point , I thought that the inclusion of Chris was going to lead to a fist fight between the local RSF crew and those from nearby areas , as the latter were heard loudly proclaiming , in earshot of the former, that , had they known that Chris was on the bill , they would have insisted that the entrance fee be ten Euro , not five ! 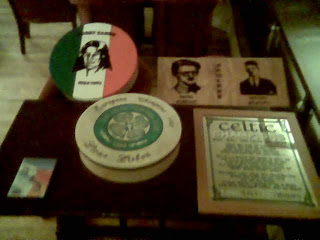 As well as that massive line-up on stage , the organisers had secured 12 items for the raffle : 2 bodhróns , 1 framed 'Celtic Champions'-etched mirror , 1 'Seán South/Seán Glynn' wood print , 1 Mayo Hunger-Strikers CD , 1 framed 'Irish Freedom Fighters'-etched mirror , 2 republican-themed wall clocks , 1 framed Bobby Sands-etched mirror ,1 'Republican Resistance' framed wood burn , 1 'Political Status For Political Prisoners' framed wood burn and 1 bottle of 'Highland Park' whiskey. All items were won and claimed on the night , with three of them sold immediately by their 'new owner' and the money donated to Na Fianna Éireann - a surprising and wecomed extra 'gift' , gratefully received by the NFE reps present , one of whom - in full uniform - delivered a powerful and well-received statement from the stage in which he confirmed that the Na Fianna Éireann organisation would continue to do as it had done over the 101 years since its formation - '...to give its support to true and sincere republicans accepting , like them , no compromises..' .

Pics of some of the rest of the prizes on the night ... 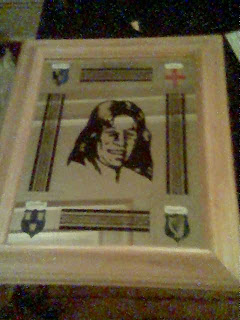 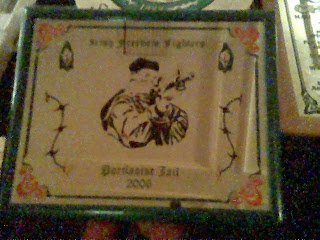 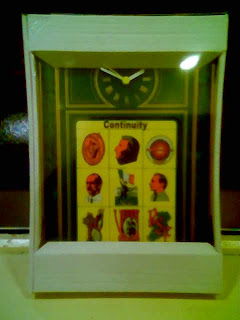 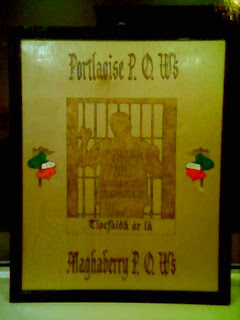 ...and finally : a few words about an up-coming gig that will be held in the 79'r pub on Saturday May 8th 2010 - a Commemorative 'Bobby Sands Ballad Session' , featuring , amongst others , The Beermats, Pato Cullen and Paddy Sweeney, to remember the sacrifice of the 22 Irish Republicans that have died on hunger-strike between 1917 and 1981 ,for the Cause of Irish Freedom , has been organised by Republican Sinn Féin Poblachtach. Doors will open at 8.30pm , admission per person will be €5 and a "Monster Raffle" will be held on the night. We will publish more details about this event between now and then -

A Commemorative Hunger-Striker Ballad Session , for all 22 Irish Republican hunger strikers who died between 1917 and 1981 , will be held in the 79'r pub in Ballyfermot , Dublin , on Saturday 8th May 2010. More details later...

- thanks for reading!
Sharon.