" It is all the more disturbing given the constant regular and clear articulation by the Polish Pope of the cause of his own homeland. Such staunch defence of Polish national rights may, indeed , have been the crucial factor in preventing a Soviet invasion of Poland and the inevitable resort to arms that has always followed from the Pope's fore-fathers whenever the sovereignty and independence of his nation seemed in danger.

But the most interesting and possibly most significant development of the past few years is of course the dramatic news emerging from the Soviet Union as the Gorbachev regime tries to come to terms not only with its economic difficulties but also with the problems of allowing the full factual history of the past to be revealed.

We welcome these developments in so far as they have attempted to promote real peace , disarmament and a more just international order. But we cannot, now or in the past , overlook the rights of the various nations that have been incorporated without their consent into the USSR......."
(MORE LATER).

At 7pm that night - Saturday 23rd March 1985 - the local parish priest and garda sergeant called to the family home in Ballyvolane and broke the news to Mrs Corcoran. At this stage it came as no surprise ; earlier in the day , she had heard on the radio that a body had been found near Ballincollig , and she had spent the day nervously waiting for a knock on the door.

She was heartbroken by the news. " I was very, very saddened to think they [the IRA] had done this to John , because I'd seen John protecting so many of them over the years , and that caused hassle with me, because if he brought guys here I had a rule that my children weren't to meet them."

The heartbreak of her husband's murder* was compounded by the shame of being called an informer. Eileen Corcoran felt the chill locally. While she describes her immediate neighbours and friends as 'brilliant' and very supportive , there were others who shunned her in the street.......
(MORE LATER).

There is substaintial support for the hunger-strikers in the British trade union movement. The Scottish Trades Union Congress is the most notable body and many other trades councils and trade union branches , too numerous to enumerate in this article, are sympathetic.

Prominent members of the labour movement - Tony Benn, Ken Livingstone etc - have been vocal on the issue. The Labour Party-based Labour Committee on Ireland has ensured that there are over forty resolutions , mostly pro-nationalist, on the agenda for this year's Labour Party conference.

Agitation around the hunger-strike by British trade unionists has begun to seriously threaten the bi-partisan policy of the Labour Party leadership and the Tory establishment.......
(MORE LATER).

(UPDATE : An American who works as an International Travel Writer , Ron Chatham, was at the GPO in Dublin on Easter Monday last when the RSF Easter Commemoration was taking place, and he took these photographs of the proceedings.Thanks, Ron - good work!)


For the 93rd successive year , RSF , as a political organisation, held an Easter Commemoration outside Dublin's GPO in O'Connell Street : the year before they held their first such Commemoration (ie 1916) RSF people would also have been present at the GPO , but inside it !

For over a three-hour period today - from when RSF began the stage/lectern etc build-up for their Easter Monday Commemoration at Dublin's GPO to when they disassembled same at 3pm that afternoon - thousands of people passed-by , out of which hundreds of Irish and foreign tourists stopped to talk and photograph the build-up: over 200 copies of 'Saoirse' were sold , and slightly more than that amount of copies of the 1916 Proclamation were sold , and a very busy 'trade' in the distribution of pin-on Easter Lillies took place. Over 600 'booklets' of Irish Republican leaflets - each 'booklet' consisting of either four or five separate leaflets - were distributed , and new contacts were made.

Led by an RSF Colour Party , members of Na Fianna Éireann and a representative from Cumann na mBan , the RSF Easter Parade left the Garden of Remembrance at 1.45pm and arrived at the GPO shortly after 2pm. A crowd had already gathered to listen to the 'warm-up' speaker and , within ten minutes , between approximately three and five hundred people had stopped to listen , all of whom stayed for 60 minutes that the commemoration lasted for.


The commemoration was Chaired by Andy Connolly , Dublin who , in the course of several short speeches throughout the proceedings , outlined to the many tourists present the historical significence of the GPO , mentioning other buildings and areas in Dublin in which action also took place. The 1916 Proclamation was read , as was the Easter Message from the leadership of the Republican Movement. Easter Greetings from the Republican Prisoners in Portlaoise Jail was read to the hundreds of people present , to loud applause, as was an Easter Statement from CIRA POW's in Maghaberry Jail. 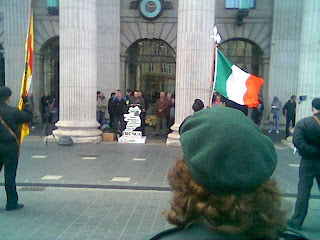 
The Main Oration was delivered by Sinn Féin Poblachtach President Des Dalton , in which , amongst other points , he outlined the history of the Republican Movement , detailing the various constitutional 'twists and turns' undertaken by those who left the Movement, having found the going too hard and the promise of a Free State or British political career too hard to resist. To a resounding cheer of support from the hundreds present , Des implored all Irish Republicans to remember , and to support , our POW's , and he also congratulated the 'Cabhair' organisation , which works full-time on behalf of our comrades who languish behind prison bars. 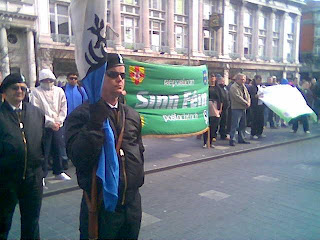 RSF colour party at the GPO.


RSF member laying the Wreath at the GPO in Dublin.


Republican Sinn Féin are to be congratulated for holding , once again, a fitting and dignified tribute to the men and women from , as one of the contributors said from the stage - "...the men and women from 1916 , those that went before them and those today that are using the same methods in an attempt to achieve the same objective as those that we honour here today.."
Apart from the usual harrassment from the 'Special Branch' , the GPO Commemoration was a trouble-free event , and is a testament to the sheer determination of that Movement. Very 'Well Done' to all concerned !
Thanks!
Sharon.

At Deansgrange Cemetery, which was established in 1861 and had its first burial in 1865 , there is an area marked as the ‘Republican Plot’ and it commemorates prisoners who died in Wandsworth Prison in 1922. James Connolly’s daughter Fiona is also buried here . It was at that Plot that approximately forty Irish Republicans and supporters gathered today , for a wreath-laying ceremony chaired by ex-POW Seán Ó Sé , to listen as Seán Ó Bradaigh delivered a resounding speech on the history of the cemetery they were standing in , which he then linked to the history of the on-going struggle itself.

An RSF Colour Party and members of Na Fianna Éireann were present , a wreath was laid and a message of support from Republican prisoners was read out during the ceremony : it was stated by Seán that , at 10am this morning ,between 20 and 30 Republican Prisoners in Maghaberry Prison took control of their landing and are now, as I type this, locked in the canteen. This event was provoked by the refusal of the prison authorities to 'allow' the men to wear Easter Lilies. This blog wishes those POW's every success in their prison struggle , a wish echoed by all at the ceremony in Deansgrange today.
Unlike yesterday in Balbriggan (Easter Saturday) , the weather was kind to us but , like yesterday - albeit not as aggressive - the 'Special Branch' were there , four of them , but contented themselves this time with recording the proceedings on a 'jeep'-mounted video unit and writing down the names and addresses of all present.
A full report , with 'proper' pictures, will be published in the May 2010 issue of 'Saoirse' .
Thanks!
Sharon.