"A MOTHER-of-three yesterday staged a seven-hour protest on top of a ladder in an attempt to prevent her family being evicted from their Dublin council house.
48-year-old Ann Moore’s protest was in vain as the council eviction was eventually completed. After returning from a night shift in a local nursing home at 8am, Ms Moore started her protest....."
(From here.)

"A family was evicted from a house in Loughlinstown in south Dublin this afternoon after a woman spent more than six hours on a ladder in protest against the county sherriff executing a possession order for her home.
A large contingent of gardaí set up barriers on access roads leading to the house at Gleanntan estate, off Loughlinstown Drive and an ambulance was called to the scene after Ann Moore refused to dismount from the ladder, which was placed against the front wall of the house.
Neighbours said Mrs Moore had returned from a night shift in a nursing home where she is employed as a carer at about 8.15am today to discover the sherriff and some council staff already in her home...."
(From here.)

The 'mistake' this family made, in 21st Century Ireland, was in not being prepared , physically or morally, to get as 'down and dirty' as those that evicted them : they offered and attempted to meet their commitment,but they were up against a 'class' of people who have no scruples. Multi-millionaires who still want more. The Gordon Gekko's of this corrupt State - " I create nothing. I own. We make the rules, pal. The news, war, peace, famine, upheaval, the price per paper clip. We pick that rabbit out of the hat while everybody sits out there wondering how the hell we did it. Now you're not naive enough to think we're living in a democracy, are you buddy? It's the free market. And you're a part of it...." : a message has been sent from the 'Establishment' to those they prey on - " Behave. Pay-up for our greed, our mistakes and our incompetence or else we'll grind you down even more. And we still might do it, anyway..."
A white-washed wall would be too quick and clean for them.
Sharon.

The shameful undermining of further developments in our national airline, even in the unfair and difficult atmosphere of 1992, is another example of a case where the new-style Fianna Fáil in tandem with the PD (West German) 'Free Democrats' , change the rules as soon as an efficient state company competes, and wins......."
(MORE LATER).

In the various accounts given by Seán O Callaghan, he describes the last days of John Corcoran after he was abducted by the IRA. He tells how Corcoran confessed to being a garda informer, to trying to set up O Callaghan and to leaking information about the Togher Post Office robbery in Cork in 1981, when three men were arrested.

In the account given to the editor of 'The Kerryman' newspaper , Gerard Colleran, just before Seán O Callaghan handed himself over to British police, he said - " I had to travel to Monaghan to meet the IRA's Chief of Staff to get permission to shoot. During my absence , Corcoran was guarded. John Corcoran spoke to me , and I taped most of what he said . I sent the tape to his family. Prior to the shooting we were sitting in a field, chatting for three or four hours.

He didn't try to get away and was not arguing . He wasn't blindfolded. He knelt down on the ground and I shot. I said a prayer, an act of contrition, before I shot him. He turned his back. He was shot in the back of the head. Corcoran said 'go easy'. That was it. He knew he was in the shit for three years and it had come home to roost. I felt human compassion......."
(MORE LATER).

Jim Kemmy, a self-styled 'socialist' and confessed anti-nationalist who won his Limerick seat on the strength of a protest vote against the major parties, and later went on to vote for anti-worker budgets submitted by the reactionary Fine Gael government whilst attacking the hunger-strikers at every available opportunity, recently received a bitter rebuke from some of his fellow union members.

The Dublin branch of the Bricklayers' Union , which comprises over half the union's membership, recently voted by over two to one in favour of the prisoners' demands. This way an implicit rejection of Jim Kemmy's position which he was vocal on subsequent to his election.

In the Fermanagh/South Tyrone by-election on August 20th (1981) , Owen Carron, who was Bobby Sands' election agent, received not only 32,000 votes plus , and victory from the people of the area, but also a rapturous response from the workers at the world-famous Belleek pottery plant. This was in contrast to one of his unfortunate opponents , SFWP candidate, Tom Moore, who not only suffered a derisory vote but who was also severely embarrassed by his own Newry work-mates : Moore works in a Newry factory and was condemned for standing against Owen Carron by the workers who once elected him as their union rep. Those same workers also let it be known that they had financially supported Carron's election campaign.......
(MORE LATER).

STANDING ROOM ONLY. AND A HACKSAW BLADE IN A BIRTHDAY CAKE....

Apologises for being late with this write-up, but we only got home from the function at 4am on Sunday morning, and had to be out and about for 10am , as we had been asked to help round-up over 600 raffle tickets for another RSF-organised event which was being held on Sunday at 1pm in a venue near the Dublin-Kildare border : then we had to prepare a report on both functions for presentation tonight (Monday 10th) at the usual RSF 'post-mortem' meeting which follows any such event(s), to access how same can be improved etc. 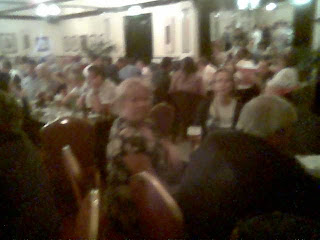 Crowd scene,at just over one hour after the doors were opened!

Anyway: the doors opened for the Hunger-Strike Commemorative function at 8.30pm , to allow the queue that had formed gain entry and, by 9.30pm , extra stools and chairs had to brought-up from the downstairs lounge , which was a sign of things to come! 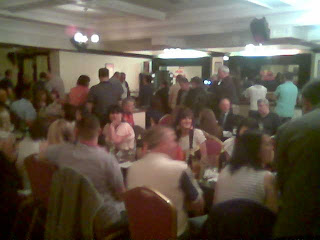 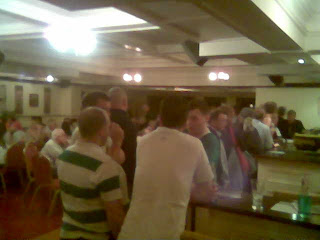 By half-past-ten, the doors had to be closed and entry refused to new-comers, as there was not even standing room available! 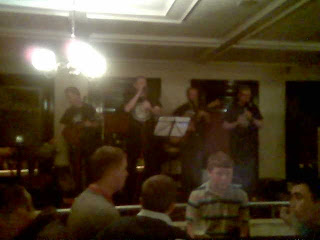 'The Beermats' giving it loads!

The ever-brilliant 'Beermats' were first up and, once again, proved why they have such a large following in that part of Dublin, which is where the lads themselves live. Paddy Sweeney was up next and, as usual, he didn't disappoint. The third act that was booked, Pato Cullen, had, on to his way to the venue earlier that evening, received word of a family emergency and had to understandably absent himself from proceedings - so the 'Beermats' went back on stage after Paddy had finished his 90-minute set.
During a break between the switch-over of acts, RSF President, Des Dalton, received a standing ovation for his speech from the stage, during which he concentrated on the POW's in Portlaoise and Maghaberry Prisons, giving up-to-date accounts of the position those men are in and the severly unjust conditions they are being forced to endure. The function organisers had ensured that everybody present received leaflets on this issue, which contained accurate information on this scandal. Des also gave a personal recollection of the events leading up to the 1981 Hunger Strikes, and linked the experiences of those ten men with those of the twelve hunger-strikers that had preceeded them. 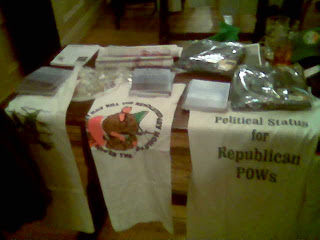 RSF 'Shop' at the gig - a large amount of Republican items were sold at the event.

Also, a photo-copied part-'booklet' , entitled 'The Final Salute : The 22 Hunger-Strikers Who Died Since 1917' was distributed to everybody in the pub - function room, lounge and bar. The 250 part-photo-copied 'booklets' distributed each contained basic details of the 22 hunger-strikers,with the 'proper' version (consisting of 26 pages) on sale in the in-house RSF 'shop' for five euro each: close to 150 were sold throughtout the event , not to mention the brisk sale of republican t-shirts , books , CD's , caps , pens etc.
A raffle was held at the function, with the prizes consisting of republican bodhrons, trouser-belts from Portlaoise Prison, t-shirts , CD's , a framed and etched republican mirror etc - 11 items in total were raffled , with the organisers running out of raffle tickets to sell! However, one of the RSF crew had prepared for such an event, and produced another book of same , which were sold in less than 15 minutes! 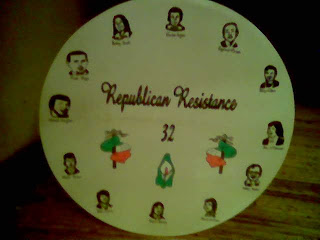 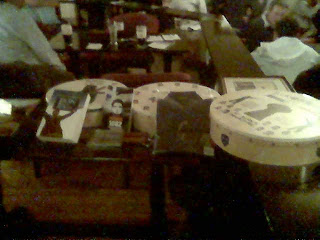 An unsuspecting member of the audience, Seán Ó Sé , a life-long republican, (and ex-POW) who was ??(!)-years of age was duped into approaching the stage from where a birthday cake , with candles, was produced by his daughters , pictures were taken, a few words in praise of the man were delivered and birthday kisses were exchanged, before he was led, red-faced , shocked and delighted, up to the bar, to recover! The poor man - he genuinely was not expecting any 'show' like that but, with the aid of a few 'shorts' on the house, soon regained his composure!
Finally ,on the only negative note of the evening,three car-loads of Political Police ('Special Branch') were outside the premises from 8pm , stopping and harassing those entering the premises. They were given short answers from those that they did manage to stop, with most of the crowds simply pushing past them, leaving them standing , exposed, on the footpath. But other than that, the function was a 'Class A' success, with every objective been obtained- the 22 Hunger-Strikers were suitably honoured and remembered, and present-day POW's had their plight highlighted. The up-coming Belfast march in support of republican prisoners was mentioned - Saturday May 29th next, 2pm, assemble at Dunville Park for a march to Castle Street - as was the Cumann na mBan fund-raiser, which will be held in the 79'r Pub, Ballyfermot, Dublin, on Friday 18th June next (doors open 8.30pm, admission five euro per person) , the bar staff, pub management and the huge crowd in attendance were all thanked,our National Anthem was sung , and..... we carried-on with a sing-song for another while!
Republican Sinn Féin Poblachtach are to be congratulated for putting such a fine and fitting event together and for, once again, keeping the spirit of Irish Republicanism alive. That organisation has proved - once again - that it is a highly-effective political machine , well capable of effective republican activity at groud level, where it has its roots. Very Well Done on that event , and on the large raffle which it successfully held on Sunday afternoon, 9th May. BEIR BUA!
Thanks for reading,
Sharon.