"No doubt Bishop Daly and those other members of the Catholic clergy whose 'ideal situation' consists of nothing more than a few strong 'Catholic voices' within the "UK" political set-up would welcome this - provided West Belfast could be turned over to the SDLP at the same time.

It was interesting to note that the Tories who spoke in favour of this change spoke also of a "two-party system" emerging in the North, and went on to presume that the other party would be a "Labour Party" ? A 'new' NILP, perhaps ? Surely not. Will the SDLP be expected to fill the role they did under Lord Gerry Fitt after Bernadette Devlin and Frank McManus were elected in 1970, and Whitehall desperately wanted a tame 'Social Democratic' voice in Westminster, oath-bound and constitutionally as loyal as Lord Fitt, the erstwhile 'Republican Labour' MP proved to be as soon as the leadership of the new SDLP came along.

The 'normalisation' of Six County politics is as sinister as the 'Ulsterisation' of British security there. Both aim to rule Ireland, North and South, with minimum loss and an "economy of British lives". With Gerry Collins, trading Irish lives for favourable publicity aimed at his own Fianna Fail leadership bid, the ground for the final British 'final solution' is being paved......."
(MORE LATER).

Catherine Corcoran said this about Séan O Callaghan - " Even though he's given graphic details to the newspapers (about the issue) and has come out and openly admitted the murder* , why can't they at least bring him in for questioning and find out if what he's saying is true?

I've never heard of this before ; someone confesses to a murder* and they're not even brought in for questioning. I just feel like they (the gardaí) are not taking this seriously. I feel like they don't want to solve it." After the initial questioning by detectives investigating her husband's murder * in 1985, Eileen Corcoran heard no more from the gardaí. " Apart from the period following John's murder*, we would never have known anything about what was happening if it wasn't for the media. That was the only way we got information," she said.

In 1989, some months after Eileen Corcoran heard on the radio that Séan O Callaghan had handed himself over to the British police and had admitted responsibility for her husband's murder* , two garda detectives visited her home. "They told me it was connected to Séan O Callaghan and John's murder*, and they asked me would I be prepared to go to the North of Ireland . I said first it was a job I didn't like to do but that I would go. They checked when I would be available", she said.......
(MORE LATER). 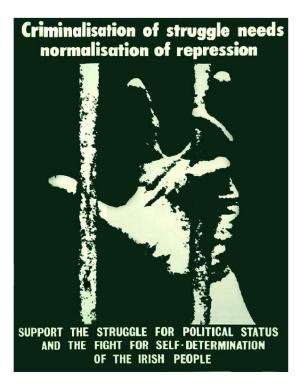 24-HOUR FAST IN SUPPORT OF MAGHABERRY POW'S.....
....on Friday 4th June 2010 ,at 2pm, outside the GPO in Dublin , a 24-hour Fast in support of the POW's in Maghaberry Prison will begin : the Fast will end at 2pm on Saturday 5th June. This has been arranged by the RSF POW Department , and if you can help, in any way, it would be much appreciated. 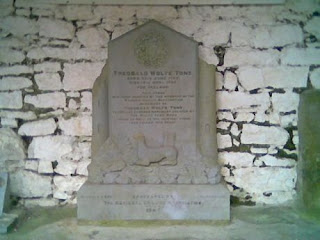 The annual Wolfe Tone Commemoration will be held this year on Sunday 13th June(2010). The Dublin bus will leave from Aston Quay (ex-McBirneys/Virgin Megastore) at 12.45pm , and will be returning from Sallins to Dublin at 5.30pm . Price per seat €10.

Once I stood on that sod that lies over Wolfe Tone
And I thought how he perished in prison alone
His friends unavenged and his country unfreed
Oh pity, I thought, Is the patriot's need

I was awakened from my dreaming by voices and tread
Of a band who came in to the home of the dead
There were students and peasants, the wise and the brave
And an old man who knew him from cradle to grave

This old man who saw I was weeping there said
We've come for to weep where young Wolfe Tone lies laid
We're going to build him a monument, too
A small one yet simple for the patriot true

In Bodenstown churchyard there lies a green grave
And wildly around it let the winter winds rave
Far better it suits him the wind and the gloom
Until Ireland a nation might build him a tomb."
(From here.)
Thanks - we hope to see some of our readers there on Sunday 13th June next!
Sharon.