" We are not afraid of the facts. Nor are we afraid of open debate about these facts - the full story of what Sinn Féin Poblachtach stands for and stood for over the years. The very reluctance of our opponents to engage in such debate , the ongoing mis-representation and black propaganda is proof , if proof were needed , that the attempt to cloud the real issues , the core values of Irish Republicanism , is not exactly an accident. Cuirimís chuige más ea.

In the Six Counties our organisation , in line with policy decided at last year's Ard-Fheis , geared itself up early this year to contest the local elections in May . What the political test oath for candidates in that election meant was spelled out clearly by us in our Easter statement - we had no intention of disowning publicly the Irish Republican Army , Cumann na mBan and Na Fianna Éireann , neither were we going to deny the right common to all people to use armed struggle as a last resort in striving to free their country from foreign invasion , occupation , oppression and exploitation.

Our candidates pledged to expose Mrs Thatcher's restrictions on free elections and deny the British an opportunity to tell the world that 100% of candidates swallowed her politically restrictive oath. With the election slogan 'For the Voice of True Republicanism , Vote Sinn Féin Poblachtach' , our manifesto promised to work for the restoration of Irish democracy and an end to British interference....."
(MORE LATER). 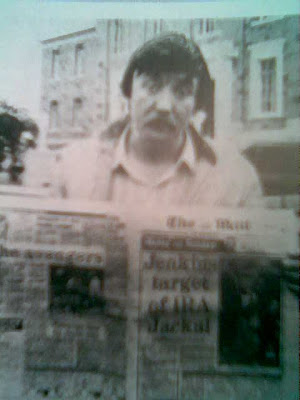 Seán O' Callaghan said John Corcoran was used by the IRA for low-level activity , such as driving IRA members around Cork. He described him as a weak man who crumbled when he was interrogated by the IRA and that , within three minutes of first meeting him he knew instinctively that Corcoran was working for the gardaí -

" He was in danger for a long time. He was always looking for information. He was under pressure to come up with stuff." O'Callaghan said that, in the last weeks of his life, Corcoran had been "....monitoring his movements ..." and was trying to contact him with a "...story.." . O'Callaghan said a 'belfast guy' from the IRA , the head of internal security, was sent to Cork to carry out an investigation into a number of matters. 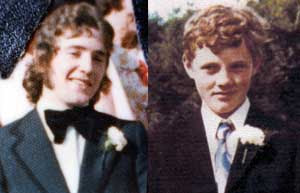 On Saturday 17th July 1976, two IRA Volunteers on active service - Patrick Cannon from Dublin and Peter McElchar from Donegal - set out in a car in which they were transporting an explosive device. They crossed the border from Donegal into Tyrone and were approaching the town of Castlederg when the device exploded prematurely. It was about 2.15pm.
Peter McElchar was killed instantly. Patrick Cannon was gravely injured and was taken to Tyrone County Hospital in Omagh. He was being transferred to hospital in Belfast when he died....

The Patrick Cannon Commemoration will be held on Saturday , 17th July 2010 , at 11.30am ; the assembly point is at the old Cemetery gates. Bus number 42 from Dublin City Centre will get you there!

The following speech was delivered on behalf of Ashleen McKenna, Lurgan, Co Armagh at the GPO in Dublin on Saturday July 10, 2010 , at the RSF Hunger-Strikers Commemoration. Ashleen, who has two brothers incarcerated in Maghaberry Jail, Co Antrim, was unable to travel to Dublin so her speech was read by Pádraig Ennis , Dublin -

"Over the past number of years republican prisoners have been subjected to physical and mental abuse at the hands of the prison wardens [screws] in Roe House, Maghaberry jail in Co Antrim which houses Republican prisoners [POWs].

The screws treat the POWs with a hostile nature and on a daily basis the POWs are strip searched. This is just a tactic used by the screws to humiliate our men. Over the past year the screws have been actively violent towards the prisoners which has resulted in several POWs being assaulted. The prisoners are subjected to 23-hour lock down with only two meals a day which are served in disposable containers and slid along the floor to the prisoners.

The POWS are denied proper medical facilities; some prisoners have serious health problems and are not getting the medical treatment they need. The POWs domestic visits are stopped when they refuse to strip for the screws. The screws are also using their drug dogs to stop the POWs families from visiting.

This protest began on Easter Sunday of this year when the POWs took control of part of the jail which lasted 48 hours. Since this time the prisoners only get an hour of the day to exercise, phone home, wash their clothes and receive a legal visit. Initially when the protest began the POWs, as part of the protest, didn’t shave or cut their hair. However, because of the lack of response from the prison authorities on improving the conditions, the POWS had no option but to escalate their protest. Because they have no toilet facilities in their cells they commenced a dirty protest to dispose of their waste.

This is an absolute disgrace to expect our POWs to live in such conditions. We need as much help as we can get from the people on the outside to try to resolve this impasse as soon as possible. The conditions are seriously affecting the health of the men; their weight loss, due to lack of proper food and nourishment, is very worrying.

Our comrade Bobby Sands said: “Everyone, Republican or otherwise, has their own particular part to play. No part is too great or too small; no one is too old or too young to do something” .

We the families along with Republican Sinn Féin will continue the protests on the outside which will include pickets, marches and leaflet drops until the five demands of the POWs are met:

The following speech was delivered by Shane O'Toole at the RSF Hunger-Strikers Commemoration,Dublin, on Saturday 10th July 2010 -

It’s an honour for me to address you all here today, the Republican people of Ireland. Twenty nine years ago ten Irish soldiers made the ultimate sacrifice for the freedom of all the people of Ireland. One by one ten young Irish volunteers embarked an agonizing hunger strike to insure basic human rights and dignity of the right to political status for Republican Prisoners of War. These young Irish soldiers were imprisoned by an illegal force of occupation. They refused to allow Britain to criminalise Ireland’s historic eight-hundred-year fight for freedom.

After five long years on the blanket and dirty protest no real gains had been made towards restoring political status and the decision was made by the prisoners to go on hunger strike. On May 5, 1981 Bobby Sands died after sixty-six days on hunger strike. One hundred thousand people attended his funeral. Marches and demonstrations were held over the world in support of the Republican prisoners. The true face of British Rule in Ireland had been exposed to the world but still the British government refused the right to political status. It took the deaths of nine more Volunteers for political status to be restored.

Twenty-nine years on and the face of British Rule in Ireland has not changed, the only difference being they are now backed by their Provo puppets, who signed away the right to political status in yet another treaty of surrender. The Provos surrendered the weapons given to them for the freedom Ireland. They have sullied the memory of the ten brave men and all those who gave their lives for Irish freedom.

These former Republicans try to give the lie that there are no longer any political prisoners in Ireland. The fact is that as long as there is any British presence in Ireland there will always be those brave Irish men and women who will resist the occupation of our country, and therefore as long as Britain occupies any part of Ireland there will always be political prisoners in Ireland.

Today the Republican prisoners in Maghaberry face the same fight for political status inside a British prison in Ireland. The conditions inside Maghaberry have been deteriorating over the past few months and just like in 1981 the prisons are being used to try and break the spirit of Republican prisoners. They did not succeed then nor will they succeed today.

We, the true Republican people of Ireland, pledge our full support to the prisoners and their families and will continue to fight for political status. We uphold the right of the Irish people to take up arms against an illegal force of occupation, and we salute the men and women who will give the cutting edge in the fight to finally end the illegal occupation of Ireland.

Until every last British soldier has been driven from Irish soil and the Butchers Apron flies no more the war against the Brits can and must continue until freedom has been achieved, and the responsibility for any loss of life will lie firmly at the doorstep of the British government.

There are those who have tried to undermine the Republican Movement in recent times. These so called Republicans have disgraced themselves and have no place within Republicanism. After being overwhelmingly rejected at last years’ Ard Fheis, egos of certain people have been damaged and when positions of power they so desperately wanted had not gone their way. They resorted to doing the Brits dirty work, taking cheap shots and releasing statements with unfounded rubbish.

The Republican movement has enjoyed over 100 years of unbroken continuity and we will not allow the actions of these people to derail that. The attempts to normalise British rule in Ireland is in full flow and we have seen this with the announcement by the Free State administration that they are to bring the Queen of England on an official visit to the 26 County state. Republican Sinn Féin will vigorously oppose any visit to any part of Ireland by any British royal as long as Britain remains to occupy any part of our country. She is the head of the State that has oppressed and occupied our people for more than eight-hundred years. We call on all of the people of Ireland to fall in behind us in our opposition to this visit. Let us move forward and end partition and create a New Ireland, ÉIRE NUA, for all of its people so that future generations can live free and decide then our destiny, just as the men of 1916 fought and died for.

We follow on in the footsteps of Tone, Pearse and Sands and will stay true to the cause so many before us have so bravely given their lives for. We will not betray the memory of our fallen heroes.

We send a clear message to the Brits either signal your intent to leave Ireland for good or you will be met with the full force of the Republican movement and Ireland’s sons and daughters will drive you out.

Stay true to the cause of Irish freedom!!Victory to the POWs
An Phoblacht Abu ! "
Shane O'Toole, Saturday July 10th 2010.

Both speeches were followed by loud and sustained applause by the hundreds of people present.
Sharon.