" In the coming year we must present to the whole Irish people our framework of a federation of the four provinces of Ireland - in a post British withdrawal situation - with maximum devolution of power and decision-making to local level , with the complete separation of church and state and the building of a pluralist society and with neutrality and non-alignment in foreign affairs as the best hope for all the people of this island.

This requires massive political and structural change on both sides of the Border in order that all of us may escape from the political strait-jacket North and South designed for us in the Westminster parliament and imposed on us by the English ruling class to our detriment. Such a solution remains our only hope of growing and developing naturally as a people and enjoying our cultural heritage. God speed the day !

Having set ourselves these tasks we should remember that the noblest ideals of each generation shall prevail. Let us move forward to the future and let us not demean the noble sacrifices of the past and present for the cause of 'long-down trodden man'. Sinn Fein Abú ! "

Peter Berry was one of the State's most outstanding civil servants. He served in the (State) Department of Justice for 44 years , ten of them as Secretary and all but the first 8 years as co-ordinator of the State's security operations.

His memory was prodigious - he had a capacity for instant recall of incidents and precedents of decades previously. Both because of his remarkable memory and the critical nature of the role he performed for such a long period , Mr Berry's memoirs are of exceptional interest.

He wrote these papers mostly during his retirement , typing all of them himself and relying on his diaries and personal notes which he had assembled over the years. He intended initially that these would be published during his lifetime but later on he decided to leave his papers for posterity. His sharp sense of propriety was offended by the treatment he suffered in his last years in the civil service and by the failure of the (State) Government to meet a promise it made to him on his retirement.......
(MORE LATER).

Like all career politicians - whether serving time in Leinster House 'till their pension for life comes through or living in Dublin and 'travelling' to work (sic) from Cork - Provisional Sinn Féin are no better or worse than the rest of them.
In May last year , Adams and Mcguinness had a friendly 'meet and greet' meeting with the UK Israeli Ambassador , Ron Prosor, at which , between pleasantries , 'trade matters' were discussed...... 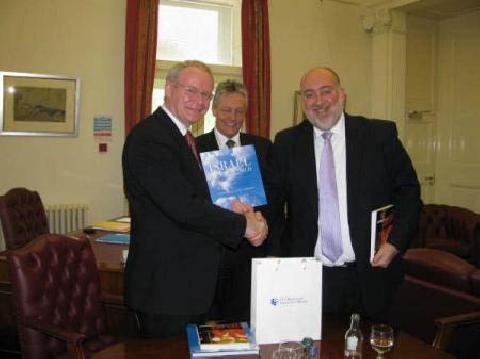 ....whilst , at the same time , PSF members and supporters were condemning Israel for their continuing slaughter of the Palestinians.

Israel's Zion Evrony asked Adams to condemn his own Party , PSF , for holding protests re his visit to a town in County Monaghan - Adams refused, but this is the same Party leader who had morally contorted himself to 'meet and greet' one Israeli Ambassador and then he, and his Party , went on to compare another Israeli Ambassador to Adolf Hitler's propaganda minister - then , apparently forgetting that he had already met and shook hands with one representative of the Israeli Government , Adams called for another such representative to be expelled - "Ireland needs to send out a clear message to the Israeli government. This behaviour is unacceptable. Summoning the ambassador to talks is not enough. We asked the Government that he be expelled from Ireland."

As we said , Provisional Sinn Féin are no better or worse at this political chichancery than their colleagues in , amongst other such 'establishment' institutions , Leinster House but , unlike their colleagues, they are still trying to 'trade' as the 'outsiders/rebels' of the Irish political field: they're not. They are career-driven opportunists, willing to jump ship if they think a different 'vessel' can offer them a quicker voyage to a full-time political career.

PSF are the same as any other pro-establishment political party , as far as republicanism is concerned , and deserve to be treated with the same contempt.