In early May 1984 , Niall Rush had undergone the first of a two-part drug test in the ICP Clinic at James Street Hospital in Dublin ; he had been in Bowe's Pub with a large group of friends and was due into ICP at 7pm. But there was a good 'buzz' with the crowd and he was reluctant to leave , so he decided to call the Clinic and tell them he would be delayed. He talked for about five minutes on the phone, came back to the bar and announced that he did not have to be in there until 8.30pm. People present who had also been in there for tests made jokes about the place and about staggering in drunk.

That had been the first phase. Now it was three weeks later and Niall was going in for the second time. There wasn't the same 'buzz' in the pub as there had been three weeks earlier. He lifted a bag over his shoulder containing clothes , books and writing materials , using his weight-lifter type of act, exaggerating the weight of the bag. From the door of the bar he gave a dramatic wave to the crowd in the corner. He arrived at the Institute of Clinical Pharmacology at about 7.30pm , and spent that night in there. Sometime between 8am and 10am the following morning , a Tuesday, he was infused with Eproxindine 4/0089 , a drug developed by a multi-national drugs company to regulate the rhythm of the heart, especially following heart attacks.

The Berry Papers document the phone conversation between Mr Berry and Mr Charles Haughey on the evening of Saturday , April 18th ,1970, concerning the attempted importation of arms at Dublin Airport. They also reveal for the first time that there was corroboration for Mr Berry's version of that conversation in that he spoke immediately afterwards about his conversation with Mr Haughey to Chief Superintendent Malone of C3 at Garda Headquarters. The terms of that conversation were crucial in the arms trial.

Mr Haughey denied that he ever mentioned anything about a guarantee of the arms going directly to the North ; about the 'man from Mayo' (Michael O Morain , the then State Minister for Justice) knowing anything about it ; and declaring that the operation would have to be called off. If Mr Berry's version were accepted as being the authentic one, then Mr Haughey would have been incorrect on insisting that he didn't know what the importation in question was.

The Berry Papers also document the meeting between Mr Berry and Mr Lynch on April 30th, 1970 , where Mr Lynch informed Mr Berry that he had decided to take no action against the two ministers who had been implicated in the allegations of an attempted illegal importation of arms. Also revealed is that it was inadequate garda surveillance that was responsible for the killing of Garda Fallon on Aston Quay , Dublin , on April 3rd, 1970. Elsewhere in his papers , Mr Berry says that the gun which shot Garda Fallon was imported through Dublin Airport in September 1969 with the knowledge of a member of the Government (26-County Administration).......
(MORE LATER). 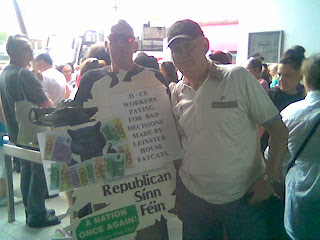 COMMUNITY AND VOLUNTARY SECTOR (CDP's , JI , CE) TO TAKE TO THE STREETS AGAIN IN PROTEST......

As part of a European-wide initiative, the trade union movement in this State has decided to try and give the impression that they are genuine in their concern for what remains here of 'the working class'.

At 12.30pm next Wednesday , 29th September 2010, those in favour of being paid a living wage and those against the unjustified financial penalities being forced on those who still have a job , will assemble outside the plush surrounds of Anglo Irish Bank in Stephen’s Green , Dublin, and march to Leinster House in Kildare Street , another corrupt institution , morally , politically and financially.

As with previous such protests , Republican Sinn Féin Poblachtach will be represented , in keeping with the beliefs of their leadership and their membership : some of the politicians , trade union leadership , the bankers and the millionaire property speculators who, between them - either through action or inaction on their part - infected the rest of us with this malaise will themselves be present , believe it or not , in an attempt to convince the more naive amongst us that 'they share our pain' : that type should be forcibly removed by the genuine protestors and, before being exiled, put into a stock on O'Connell Street where ordinary people can 'express' themselves to them....