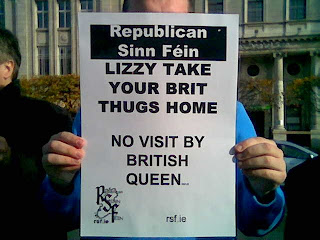 
Republican Sinn Féin Poblachtach members staged two protests today in O'Connell Street , Dublin, both of which lasted for 75 minutes : a 'Political Status' picket , and a 'No To Royal Visits' picket. About 20 activists , including a 'crew' who 'worked the immediate area' with leaflets and selling the 'Saoirse' newspaper , maintained a very visible presence on the traffic isle facing the GPO , and were well received by shoppers and passers-by ; indeed, tourists from France , Italy and America , amongst other places , not only took leaflets and purchased 'Saoirse' , but practically formed a queue at one stage to be photographed with the assembled Republicans!


More than 30 copies of the 'Saoirse' newspaper were sold , and 900 leaflets distributed - 300 each of 'Political Status' leaflets , 'No Royal Visit' leaflets and 'CABHAIR Christmas Swim' leaflets , a 'job' which kept the seven-person 'crew' engaged for the duration of the pickets. Incidentally , two 'crew' members returned to base (!) with the equivalent , roughly, of €50 each (in American and Australian dollars!) , which they received as donations , from tourists who had earlier 'posed' in between the Republican placards and banners in O'Connell Street - they were full of praise for those on the picket , and were especially delighted to be given a half-dozen of each leaflet each , and a few 'papers! 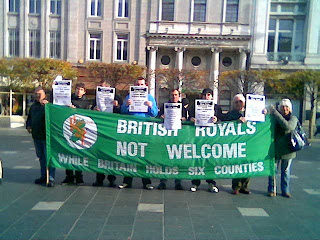 
.....missing 'N' ! The missing letter can be attributed to a Special Branch man , Nicky , who, accompanied by his equally 'Special' girlfriend - too shy to give her name - tried their best to move the RSF 'picketeers' off the traffic isle and , when that failed, tried to scare away the on-lookers and the many tourists - but no luck there , either ! So , in desperation , we think he must have tried to interfere with the placards and obviously succeeded in damaging at least one. That's our story , icky (!) , and we're sticki g to it...;-) !


Finally - even though we promised we wouldn't mention it (didn't we , Louise and Maire ?) , but it's almost Halloween and we're up for a wee bit of divilment (!) : an RSF Comhairle Laighean meeting ('Leinster Executive') was held today in a venue near Fairview in Dublin , from 12 Noon to 2pm , clashing with these two pickets. Bad timing on someones part , eh , girls.....;-) !
Anyway : full marks to RSF for the good jobs today , thanks to the many wishes of support from the thousands of people who seen us today , to Louise and Maire (!) and , of course , to icky and his girlfrie d , whom we hope will tie the knot soon.
Where they tie it , of course , is there own business....
Thanks!
Sharon. 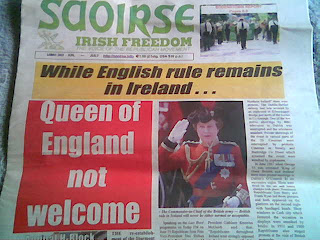 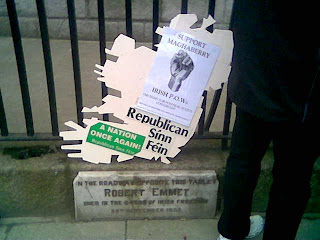 The main specification in paying volunteers for drug trials is that the inducement should not be too much : even if the payment were less than £20 a day , it is likely that people would still put themselves forward as volunteers and that can be witnessed in the fact that even though the rate has not changed in the last six years (but the actual value of the amount has decreased considerably) there is no shortage of volunteers.

Joe Claffey and Niall Rush went to ICP Limited in May this year (1984) to put themselves down to be tested for a drug to control Parkinson's Disease: on the consent form , that drug is identified simply by the code MJ 13805 , and this was to be the first time that it had been given to a human , with the test being carried out for the company Bristol Myers, and was a 'tolerance study' , meaning that the dose given is increased with each administration.

One of the purposes of a 'tolerance study' is to find out at what point the patient will experience adverse effects. A total of 18 people were to be taken in for 17 days , with each participant receiving £340. 'Clause 5' of the Consent Form would be read to each of them as they 'signed in'.......
(MORE LATER).

" Through experience I found, at times , that information emanating from the field workers in the 'S Branch' had taken on a different emphasis after it had passed through Garda HQ and I was not happy with some of the HQ interpretations which tended to make mountains out of molehills.

My direct contact with the Head of the 'S Branch' and my general knowledge of the subject stood me in good stead for instance when I found that, without the Minister's knowledge, a radio network was being strung along the Border in anticipation of an outbreak of IRA violence on the occasion of the 1966 Commemoration Ceremonies of the Rising of 1916 : Garda HQ went off at half cock and were taking preventive measures just in case while , in my judgement, the installation on Garda barracks along the Border of a radio network might prove to be a provocation so I took the responsibility of cancelling the installation and I was proved right , in the event.

Indeed, the Garda action might have had more far flung results as I had a personal letter from the Secretary of the Ministry of Home Affairs in Northern Ireland (sic) asking for a meeting between our respective Ministers for a joint plan* against anticipated IRA violence. The meeting was avoided but the projected action from Garda HQ might have led to acute embarrassment for Government. This was only one of several occasions on which Garda HQ , always kicking for touch, gave advice in policy matters which was not justified by the facts......"

( * '1169..' Comment : for "joint plan" read 'collaboration' , a long-term and on-going 'solution' by Leinster House in how to 'deal' with resistance to British interference in Ireland - cooperate with Westminster in its occupation and aid it in its fight against those who seek a re-united Ireland!)
(MORE LATER). 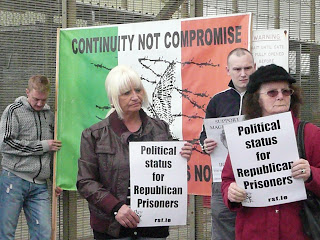 A quick mention here about our friends and colleagues in the Limerick area , whom we shared company with at a recent function. Congratulations to all concerned on the gains made and on managing the increased workload. We'll return the hospitality at the Ard Fheis function in November - but it's still your round ;-) !

We don't often (enough!) use our blog to comment on Irish Rebel songs , but at the last Republican gig we attended we heard two old favourites that are not heard often (enough!) at ballad sessions , so we thought we would take this opportunity to link to one of them and to provide basic info (here) regarding that IRA Volunteer.

But we can't find a decent video of the second old favourite so , rather than do it an injustice , we'll just post the lyrics of it here -

A cold May morning was breaking over Dublin's dreary town
Sixteen brave men have fallen to the rifles of the crown,
Because they loved their country and served it night and day
Before they faced those rifles this is what those boys did say-

"Take away the blood-stained bandage from off an Irish brow
We fought and bled for Ireland and will not shirk it now,
We have held in her struggle, in answer to her call
And because we sought to free her we are placed against a wall...."

Ned Daly, Heuston, Colbert, Mac Donagh and Mac Bride
Mac Dermott and the brothers Ceannt, with Clarke and Plunkett died
Mick Mallin, Pat and Willy Pearse, O'Hanrahan and Kent
And last of all James Connolly this message to them sent-

"Take away the blood-stained bandage from off an Irish brow
We fought and bled for Ireland and will not shirk it now,
We have held in her struggle, in answer to her call
And because we sought to free her we are placed against a wall..."

The next Republican gig in the 79'r Pub in Ballyfermot , Dublin , will be held on Friday 17th December 2010. If you can make it , well and good - if not , we'll be thinking of you in between pints of cider and singing along to the above two songs... ! 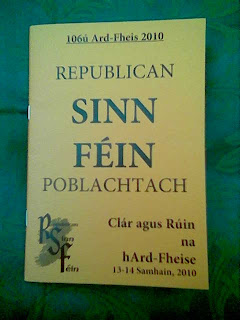 106 ALL ROUND !
The 106th Ard Fheis of Republican Sinn Féin Poblachtach will be held in a Dublin venue on Saturday/Sunday 13th/14th November 2010, at which 106 motions will be discussed. That figure represents the final tally of motions , duplicates having been amalgamated. We are particularly pleased to see a number of motions on the Clár ('Programme') dealing with workers in the Community Sector (CDP's,JI and CE) , as this is an issue of specific interest to those of us on this blog.
Congrats to RSF and full marks indeed to those men and women who remain true to their Republican principles!
Thanks!
Sharon.