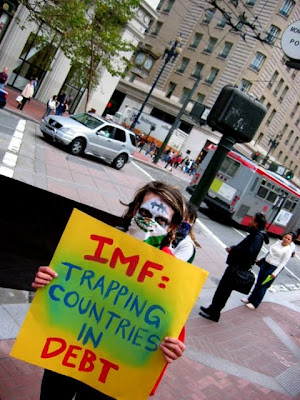 ETHIOPIA TO HOLD 'LIVE AID CONCERT' FOR THIS STATE ?

"The arrival of the IMF and EU into the 26 Counties is a damning indictment of the capitalist policies pursued by Fianna Fáil and clear evidence of the abject failure of the State as a whole. The IMF and EU officials will set about creating a capitalist dictatorship without any of the façade of democracy that used to prevail in the Free State. It is expected that there will be massive cuts in the public sector imposed and the probability of the selling of the family silver such as the ESB and Bord Na Mona looms.

The solution to the current economic woes is to create a new Ireland based on sound socialist principles with all banking and financial institutions coming under social control. Rather than offer a multi billion Euro loan Britain should declare her intention to withdraw from Ireland so that the Irish people can set about building this new Ireland. Republican Sinn Féin’s Éire Nua (A New Ireland) policy proposes the establishment of a 32 County Federal Democratic Socialist Republic with maximum devolution of power to local levels to help address both the power and economic imbalance in Ireland.

Only by the destruction of the current system that relies on gombeenism, clientelism and pandering to the capitalist classes is it possible to build an Ireland that truly cherishes all of her children equally. Only a socialist solution will be able to solve this Capitalist-caused problem. "
(Statement by Republican Sinn Féin Vice-President Fergal Moore.)

Incidentally , a lot of commentators on radio and television today have shared a common viewpoint regarding the IMF political take-over of this State yesterday, and have asked , in one form or another , 'is this what the men and women in 1916 fought and died for...' , to which Irish Republicans reply - 'No , it's not: whether the IMF are here or not, not one person fought or died , in 1916, for the establishment of a 26-County so-called 'republic'...."
And even those who, a short few years after the 1916 Rising, shouldered weapons in a campaign to ensure the establishment of just such an entity must surely be equally sickened to see that their political 'cousins' in Leinster House could not maintain the falsehood represented by a false and immoral 26 County 'Ireland'. This pathetic State was built on sand by short-sighted people ,and is now owned by business representatives based in Washington. As RSF VP Fergal Moore stated -
"Only a socialist solution will be able to solve this Capitalist-caused problem...."
Thanks for reading,
Sharon.

The 'Eproxindine 4/0089' test is a 'split test' , with a gap of three weeks between two sessions. One of the other participants had been in three weeks before Niall Rush and , on the first session, he says, they were taken in at night , some days after their pre-medical. The following morning they were given the drug and about one hour later he experienced numbness of mouth and lips , taste distortion and loss of balance. Another participant suffered an acute attack of nausea.

Niall Rush's father was an Ambassador , and the family spent time in the United States , Nigeria and Portugal. He was born in 1953. Later on , he was sent to Gormanstown College and , sometime in the mid 1970's , he was diagnosed a schizophrenic - he was still under treatment at the time of his death. Over the last six or seven years he worked at a variety of odd jobs , including one as a porter in a hotel. He lived in different parts of Dublin , moving to England and the Continent to stay with friends from time to time. Occasionally , he did clinical drug tests in James Street , as did many of his friends , and was not the healthiest of individuals , smoking up to 50grms of 'Duma Roll-Your-Own' cigarettes a day.

Under the 'Coroners Act', when somebody dies and a medical certificate is not forthcoming , there is an investigation by the gardai , as agents of the Coroner. Following the death of Niall Rush , there was a post-mortem , performed by John Harbison , the State Pathologist. Detective Inspector Connolly of Kevin Street Garda Station and Garda Joe McGarrity from Kilmainham were put onto the case.......
(MORE LATER).

" When he became Minister , Mr Haughey sought to appoint his man to a minor position which carried payment of a second capitation grant where one 'suffered in the public interest' : he could have sacked the person who was already working in that minor position , but that would have brought down on his head the wrath of the local Dail Deputies who had approached Mr Traynor , the other Minister. I told Mr Haughey that I couldn't make payment (to the second appointee) and when he insisted I should , I said that of course I would obey his direction but that I was requested under the Rules to report the matter to the Minster for Finance and to the Committee of Public Accounts. The matter was not pursued but I thought it prudent when leaving on my annual holiday to acquaint my Assistant Secretary of the facts involved.

I had a second disagreeable clash with Mr Haughey in 1962 ; a vacancy occurred for the appointment of a semi-civilian semi-police post as immigration officer at Cork Airport. The Commissioner of the Garda decided to have a selection board to decide which of the immigration officers serving at Dublin Airport , Shannon Airport and Cobh seaport would be most suitable for promotion. Meanwhile , Mr Haughey told me that he had representations from Mr Jack Lynch for appointment of the Cork based man and to convey that to the Commissioner. But the Commissioner put forward the names of four candidates in the order of merit assigned by the selection board in which the Corkman was fourth.

I supported in writing the Commissioner's recommendation that the number one should be appointed but the Minister , Mr Haughey, sent for me and, purple in the face and in a hectoring voice , said 'Didn't I tell you I wanted X appointed?' , so I pointed out that to appoint X in the teeth of the selection board's choice and the Commissioner's recommendation would be open to grave criticism and that I could not lend my support to it......."
(MORE LATER).

The National Graves Association will be holding a fundraiser in the Milestone Inn, Balbriggan this Saturday night (20th November 2010) at 8.30pm. The Druids will be playing. Tickets are available at the door for €10.00 and all funds raised will go to the upkeep of Republican graves. As we stated here recently in relation to the NGA - "They are a tireless bunch , totally dedicated to their objective , and deserve any assistance you can give them....". If you can't come along yourself try and spread the word to those that might be interested , and maybe even buy a ticket or two anyway!
Thanks!
Sharon. 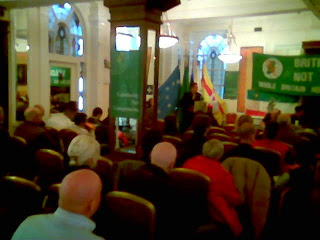 
Although we had a two-day 'Visitors Pass' , we could only stay at the Ard Fheis for the Saturday morning session , as we had volunteered to assist in the collection of 650 raffle tickets from various locations around Dublin , and to attend the raffle itself , which was to be held in a different hotel to the Ard Fheis venue , on that Sunday afternoon. More on that raffle later. 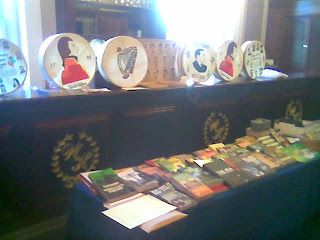 Some of the Republican items for sale at the in-house Ard Fheis Shop...... 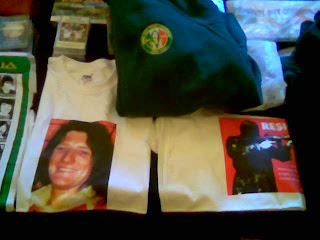 ....and more of the Republican items for sale. Such was the level of sales and orders placed that the two-day Shop practically paid for the hire of the Ard Fheis venue!


An assembly of seven 'Special Branch' operatives were kept busy at the entrance to the hotel and, as usual , they didn't distinguish between the hundreds of Republicans that attended the Ard Fheis and the hotel guests , and were observed 'talking to' the UTV camera crew that covered part of the proceedings today , Sunday 14th.
Messages of support for the Republican Sinn Féin organisation and for Des Daltons leadership of same were read out from the speakers lectern by representatives from CABHAIR , Cumann na mBan and Na Fianna Éireann , and similar messages were either delivered in person or read out on behalf of affialiated support groups and organisations in England , Scotland , Canada and America , to loud applause from the assembled Republicans. 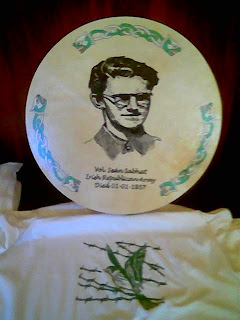 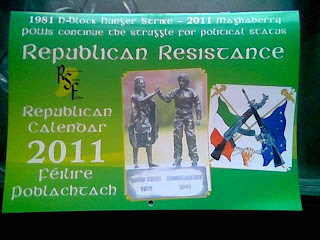 ....and the 2011 Republican calendar , over a thousand of which were sold during the two days , with more than twice that amount being ordered.


The RSF Ard Chomhairle announced that new RSF/Saoirse websites will be launched in the next few days , which should be better able to deal with the volumes of traffic being received - 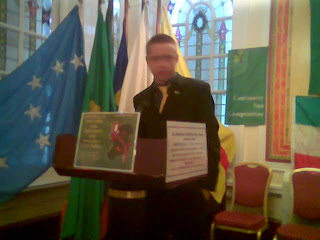 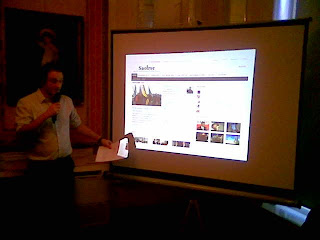 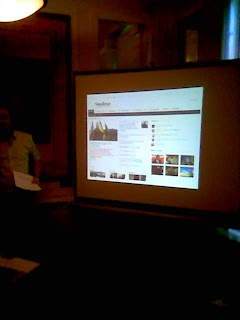 
And the reason we had to leave early- 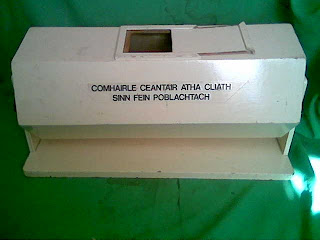 The raffle drum used in the Monthly Raffle, which was held today , Sunday 14th November , in a different venue to the Ard Fheis.

We'll finish this post by congratulating Republican Sinn Féin Poblachtach on a successful Ard Fheis, and by stating our belief that the 'Raffle Crew' we worked with today at the monthly raffle are a sincere and dedicated group of Irish Republicans ,as are those that were at the Ard Fheis , the RSF leadership and the many people that work 'behind the scenes' in ensuring that the whole operation works. They are a credit to themselves and to Republicanism !
Thanks for reading,
Sharon.