The RTE TV programme 'Prime Time' spent over a year investigating the allegations made by ex-garda Jack Doyle - they interviewed Edward Keating , a former British soldier and firearms enthusiast , and a garda informant , and he confirmed much of Doyle's claims. Former State Justice Minister Nora Owen called for an inquiry into the case , saying she could understand if drugs were allowed into the State in order to capture somebody but "would not be happy" if it was the case that the drugs were allowed back on to the streets to reach addicts.

In one of the more bizarre events leading up to the TV broadcast , the programme presenter Brendan O'Brien was contacted by Cork Fianna Fail TD Noel O' Flynn , who wanted to "tip them off" on the backgrounds of some of those they had interviewed , including ex-garda Jack Doyle . O'Flynn said he had been asked to help , but refused to say who had asked him.

The Garda Press Office refused to answer any questions put to it by RTE in relation to the case but the programme was aired anyway , in July 2001 - and became controversial for all the wrong reasons.......
(MORE LATER).

" I said to the Minister - 'Before we commence , I want you to know that when I was told by Dr. Nolan (Secretary to the Cabinet) of the Government's decision I communicated the news to the Commissioner and gave a press release which was featured on Radio Eireann 'News at 1.30'....' . His reaction was alarmimg : " Fuck you , fuck you , fuck you...." , he roared five times while pounding the desk, "...you did that contrary to what the Government wished , they wanted no publicity...." . I replied - ' But , Minister, you approved in advance that publicity was desirable and I received no word from Dr. Nolan to the contrary . I simply carried out your decision of which my two colleagues were aware last evening....' .

They both nodded their agreement , so I went on to ask what had been the Government's decision on the question of a 'native medal' and he said that the Government had decided to leave it over until the matter was raised by the Garda authorities.

The conference proceeded for about an hour or so and , before we left, he said sheepishly to me - " I have been blowing my top at you when I should be doing it somewhere else". When we were in the corridor leading to my room one of the Assistant Secretaries said to me ; " How did you hold your cool , in my wildest dreams I could not have imagined such a scene...? " , and the Second Assistant Secretary remarked - " Did you notice that he was not able to pronounce the word 'fuck' properly - it sounded more like 'whack you , whack you ?' . 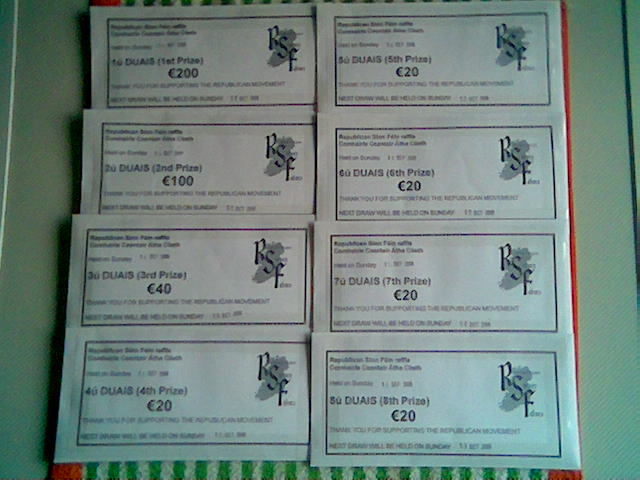 We held one of these on Sunday last (11th September) in the hotel , as usual and , again (as usual!), all 650 tickets were sold : there was some football match or other - or was it horse racing ? (!) - on the giant plasma telly and not alone did we run out of tickets to sell , but we sold about fifty tickets for next months raffle , too - 25 of them were bought and paid for , there and then , by one customer, Michael , who won the First Prize of €200 with ticket number 247, and immediately purchased 25 tickets for the next one , starting a 'mimi-avalanche' amongst his many mates , resulting in sales of a further 25 tickets for the October raffle !
The second prize (€100) was won by Carin , ticket number 331 , then Dano won prize number three (€40) with ticket 660, followed by 'Speddy' , who won €20 on ticket number 17.
The fifth prize of €20 was won by Mary Whelan , 419 , prize number six was won by ticket number 631 and claimed by Seámus , leaving Hannah and Catrióna to claim €20 each on ticket numbers 130 and 251.
It was another success story , run by (and on behalf of) Comhairle Ceantair Átha Cliath, Sinn Féin Póblachtach : we could tell you the exact date of the October 2011 raffle , but there's no point - we don't need the publicity and , anyway , all the tickets are 'spoke' for. And there's practically a 'waiting list' for them at this stage.....! 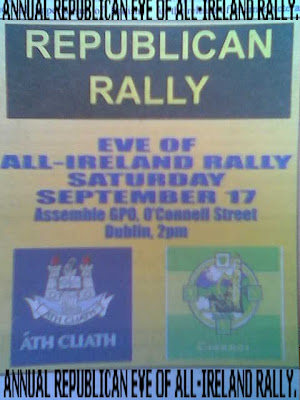 The Annual Eve Of All-Ireland Rally will be held , in Dublin , on Saturday 17th September 2011 : those attending are asked to assemble at the GPO , in O' Connell Street , at 2PM.

On Sunday , 25th September 2011 , a '1798 Remembrance Day' will be held at Fordstown Memorial Site in County Meath. The event has been organised by Meath Republican Sinn Féin and those attending are asked to assemble in Fordstown at 3pm : further details can be obtained by phoning 086-7326922.