Garda Supt. John Farrelly told the 'Irish Times' newspaper that where Garda officers attempted to get close to the nucleus of a gang "over a period of years" , they would "obviously not have prevented the drugs getting to where they were going." This, he said , was in order to trace the individuals involved and it was not the same as Garda officers "importing" drugs into the State as alleged in the TV programme.

There has been no investigation since into the allegations. When 'Magill' magazine asked the Garda Press Office to respond to ex-Garda Jack Doyle's claims, they refused to comment.

In 2001 , Garda informant Edward Keating sold his bungalow and stables outside Blarney , Cork, and is understood to have left the country and Cork criminal Tommy O'Callaghan is believed to be living in Spain - he was never convicted by the Garda.......
(MORE LATER).

" When in the course of conversation with the Taoiseach I mentioned the Minister's meeting with the Commissioner and the head of the 'S Branch' in the previous December and the police information about the participation of Ministers in supplying arms to the IRA , he seemed to be genuinely surprised ; up to then , my feeling was that Mr. O Morain simply couldn't have kept the Taoiseach in the dark but that it was not polite to let me know.

The Taoiseach told me that he had been asked who were the IRA leaders in the North, the men who really mattered , that an eminent Church leader felt that a direct appeal from person to person might achieve a good result in bringing an end to violence. I said that I would find out . Later on - on 16th May 1970 - the Taoiseach was to ask me if Mr. O Morain would remember his conversation with me on 13th April 1970."

" In the afternoon , in the aftermath of a Government meeting , the Minister had a prolonged discussion with me and an Assistant Secretary , a Mr. Ward , who was suddenly summoned from the room. He returned to say that the matter required my personal attention and , with the Minister's permission , I left the room with Mr. Ward. An IRA arms shipment from Germany was apparently on its way......"
(MORE LATER).

Republican Sinn Fein is organising a candlelight vigil for Wednesday, October 5th ,2011, at the GPO, Dublin from 6pm - 7pm on the 30th Anniversary of the ending of the 1981 hunger strike. All those who took part in the 1980/81 hunger strikes will be remembered as indeed will the 22 men who died on hunger strike in the cause of Irish freedom since 1917.
Please bring some candles with you and ask your neighbours and friends to do likewise. 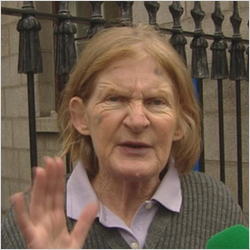 All branches of the media in this State have gone into overdrive in relation to the State presidential election and the fact that seven candidates are now in the running for that well-salaried position [€5187 a week salary , recently reduced from €6781 a week - even the rich must suffer.... ;-) ] and the fact that a 65-year-old female pensioner has been jailed for trying to protect her land is not featuring in the news bulletins.
In 2006 , two electricity supply companies wanted to 'improve service for customers' by running overhead power cables across fields and farmlands that they had no claim over , and various community meetings etc were held in the areas that would be affected by the work involved : 65-year-old Teresa Treacy , living just outside Tullamore , in County Offaly, was one of those whose house and adjoining lands would have to be 'crossed' , with the removal of 12,000 trees, in order that those supply companies could 'improve service' (ie 'up their profits') and, as is her right, she objected to the proposals outlined to her by company reps - instead , she suggested that they go underground with their cables , thereby causing minimal damage to her property and also addressing her concerns re health implications ie exposed high-voltage cables and , over a five-year period, repeatedly offered the use of her property for same : just over two weeks ago , Teresa was jailed, for an indeterminate time (that is, until she surrenders the [ab]use of her land to the power companies) for 'contempt'.

Even for this corrupt State , this is a disturbing development and one which the mainstream media , and each of the above-mentioned seven State presidential candidates , would prefer to see 'buried' , unlike the high-voltage power cables which are the cause of this injustice. You might sign the petition for Teresa here , and/or write to the lady at ' Dóchas Centre, Mountjoy Women's Prison, North Circular Road, Dublin 7'.
Thanks for reading,
Sharon.