Journalist Paul Williams said - " In Cork , there was Tommy O' Callaghan and Paddy McSweeney , who is now fighting the Criminal Assets Bureau over a bill for more than €1m. There were dozens of people operating on a smaller level at that time , but the State had no mechanism to take them on - they were driving Jags and drawing the dole , and seemed to be operating with impunity."

There are no clear rules in terms of how far the Garda can go in their fight against the drug barons . In Britain , legislation has been introduced to deal with undercover operations but there are no such laws in Ireland , and this issue has never really been tested in the courts either.

Entrapment as a defence to a criminal charge has been recognised in America - it arises where a defendant is induced to commit a crime by a police officer , or someone working on behalf of the police. In one American case , Sherman v United States, the defendant had been asked on several occasions by a man working for the government to buy him heroin ; he did so , reluctantly, and was arrested. The Supreme Court quashed his conviction , saying that the police had effectively created the crime , although it accepted that stealthy police undercover work was necessary for the prevention of crime it stated that such work "....manifestly....does not include the manufacture of crime...."
(MORE LATER).

" From then on , I was in almost continuous telephonic communication with the Commissioner , C3 in Garda HQ , the Head of the 'S Branch' and the Department of T and P , as to what airports , other than Dublin, could land a plane with 6.8 tons of cargo , and the answer was Shannon , Cork , Farranfore in Kerry and Castlebar in Mayo. I also made enquiries as to the ceiling below which an approaching plane could divert to another airport without coming under radar notice. "

" My security arrangements recommenced early next morning with constant incoming calls according as arrangements were concluded and it was not until 12.30pm that I was able to receive a call from the Minister who was angry that I had not been in touch with him ; I explained that my line or his line had been blocked every moment that I had thought to get in touch with him but that I could assure him now that everything was safe.

I said ' You can sleep easy tonight , there is a ring of steel around Dublin Airport.' That phrase had appeared in the newspapers shortly before this in a description of the Soviet troops around Prague. I also told the Minister about my arrangements to cover the other four airports......."
(MORE LATER).


8 WINNERS WHO PAID FOR THEIR PRIZE...

Another very successful monthly raffle was held in our usual hotel venue last Sunday (9th October 2011) at which the full compliment of 650 tickets were sold : a well-attended birthday party in an adjoining function room would have guaranteed the sale of at least 100 extra tickets , had they been available for sale but , unfortunately , that was not to be - this time : the organising committee are seriously considering increasing the number of tickets in the raffle , such is the demand for them , and this is my little contribution towards nudging them in the right direction !
Anyway - congrats to Frank W , Mark Corcoran , Frank O , Natasha , Mark Kelly , Billy , Alan Hughes and Ryan on buying a winning ticket , the numbers of which were 596 , 667, 643, 685, 231, 188, 227 and 157 : perhaps in the New Year it will take us a wee bit longer to record the names and numbers of our raffle winners....!

...AND ONE WINNER THAT THE REST OF US WILL PAY FOR : 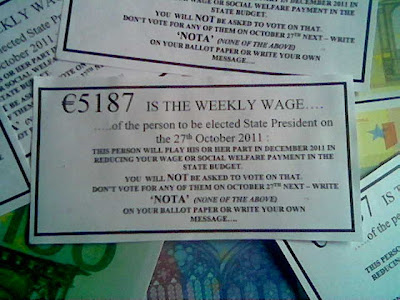 Vote 'None Of The Above' leaflets re the up-coming 27th October 2011 State Presidential election.


€5187 weekly wage , treated like the 'VIP' you believe yourself to be and never having to work a day in your life again : the rewards , at tax-payers expense , for the winner - having to foot the bill and trying not to vomit when you hear yet another "Going forward...." -type speech from the holder of the Office of State President ; the 'reward' for those that voted him/her into that position.
The above leaflets are being distributed in their thousands around ever-increasing parts of Dublin in what has become a 'viral' effect - for every 100 leaflets that are distributed door-to-door , for instance , an average of seven householders have approached the leaflet distributor and requested a few hundred leaflets which they themselves want to distribute ! Indeed , at the above-mentioned raffle , a 'block' of 500 leaflets was distributed , between 'table drops' and customers asking for a few dozen which they themselves will pass around in work , on the dole queue , or door-to-door.
This blog is of the opinion that the best way to appoint a 'new' State President - if such a position should exist at all , and it shouldn't , in our opinion - would be to line all seven candidates in a row , have each one hold a scissors in their left hand , with their right arm and hand being held in a position as if to shake hands with somebody and announce that the candidate who looks best in that position be declared the winner : because that will be all required from them for at least the next seven years !
If you can get your hands on a ballot paper on October 27th next , use it wisely : write 'None Of The Above' on it , or a message of your own choosing.....
Thanks,
Sharon.