In Ireland , the issue of entrapment has rarely appeared before the courts , although some commentators believe that the courts would be favourably disposed to such a defence.

In a 1981 case , King v Attorney General , Mr Justice Henchy , speaking of the Constitutional guarantee that personal liberty would not be removed other than in due course of law , stated that "due course of law" meant "without stooping to methods which ignore the fundamental norms of the legal order postulated by the Constitution."

A barrister stated - " There is no provision in law that gives the Garda an exemption for being in possession of illicit drugs. If the Garda seize drugs for the purpose of using them as evidence in a criminal trial , that's fine. But if they go beyond that and use them to set up some other operation , for example, that would not be covered......."
(MORE LATER).

" During his evidence in the Arms Trial on 28th September 1970 , Mr O Morain said that he was in the West of Ireland on Saturday , that he had been informed by Mr Berry on the previous Thursday or Friday of information about the importation of arms and that it was after the weekend that he had heard from me "of the ring of steel" around Dublin Airport.

Mr O Morain made quite a number of false statement which could be totally disproved ; the next day , 29th September 1970, I had the very detailed newspaper reports divided in columns which were pasted to blank sheets of paper on which I made comments at the appropriate points in which I indicated for State Counsel the errors of fact.

I attached a photostat copy of the log-book of the Minister's car and a copy of the police driver's subsistence claim , each of which showed that the Garda car had clocked out of the Garda Depot at 9.30AM on Sunday 19th April . This documentation was in the hands of State Counsel before the second Trial began but no use whatsoever was made of it......."
(MORE LATER). 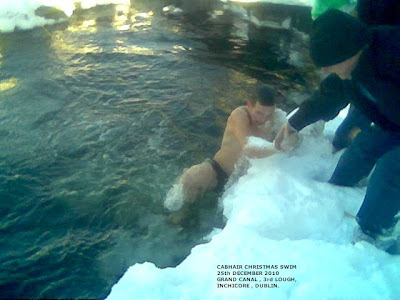 The above picture was taken at the 2010 CABHAIR Christmas Swim on December 25th 2010 , at Inchicore , Dublin. That event marked the 34th successive year of the Christmas Swim and, as you can see from the link , it was held in sub-zero temperatures in an area that offers no shelter, natural or otherwise, from the elements.

A brief history of the CABHAIR Swim can re read here , and contact details for the CABHAIR organisation can be viewed here : this blog will be highlighting this event again , between now and the date involved , and we remind our readers that all funds raised for the Swim go directly to the families of the POW's which CABHAIR looks after , as not one of the many people involved in organising it claims expenses - the position within the Republican Movement is as it always has been ; they try to look after their own and do not seek or receive any funding whatsoever from Leinster House , Stormont , or Westminster , nor will (or has) any such funding been sought to organise the 2011 Swim , the 35th such event.
If you are unable to assist financially , the organisers would appreciate if you could 'spread the word' in whatever way you can, and as often as you can : the mainstream media in this State have consistently ignored this event since it began (although the 'Special Branch' haven't ; seen here , harassing Santa at the Swim) and have always refused to give it a 'mention' , either before or after. At the time of writing , four swimmers have been confirmed and are seeking sponsorship , and more will be 'booked' in the coming weeks.
The organisers , and those that actually swim , and those that take the time on Christmas morning to attend as observers are to be congratulated for , between them , managing to keep this event going for 35 successive years , despite the best efforts of hostile weather and an equally hostile State !
Thanks,
Sharon.