The vast majority of customs officers who spoke to 'Magill Magazine' believe that a joint agency similar to the US 'Drug Enforcement Administration' (DEA) is the only answer to their current problems. They point to the success of the 'Criminal Assets Bureau' (CAB) as an example of how Customs and the Garda Siochana can work well together.

Labour Party justice spokesperson , Pat Rabbitte , also believes it is time that the Minister considered a single agency to tackle drugs - " There is no room for turf wars in the fight against the drug barons. The new Minister should look at the merits of streamlining , in a single agency, those in the frontline against drug dealing."

As for Jack Doyle's allegations , he says - " There seems to be a prima facie case that requires an investigation. If there is any truth in these allegations , there is a need to review whether legislative changes are necessary to govern these type of operations."

" In speaking to Mr de Valera I was certain that I was adopting the right course : I had had many kindnesses from him and I knew that he would not resent my approach. When I was put in contact with him by his personal secretary , Miss O' Kelly, I said - "I have come into knowledge of matters of national concern and I am afraid that if I follow the normal course the information might not reach Government. Does my duty end with informing my Minister or am I responsible to Government by whom I was appointed ? ".

I did not tell the President the nature of my information and he did not ask. After the dismissal of the Ministers on May 6th I had a phone call from Miss O' Kelly who asked me to repeat my conversation with the President. I did so in the terms above , of which I made a note. Miss O' Kelly thanked me and said that I had confirmed the President's recollection that the subject matter had never been mentioned by me...."
(MORE LATER). 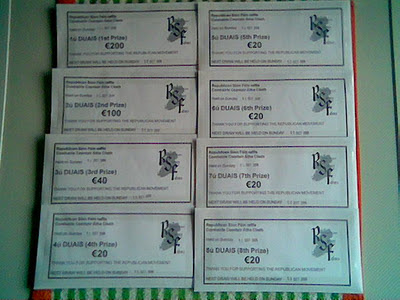 "Rev. Michael Griffin C.C., (Gurteen Galway.), A supporter of the Irish language and volunteer causes, was taken from his residence at 2 Mountpelier Tce. Galway on the night of 14 -15 November 1920 to the HQ of the Crown forces in Taylor’s Hill. His body was found on Sunday 20th. November having been buried in a boggy field at Cloghscoltia near Barna. A military inquiry held at Eglinton Police Station found that he died as a result of a gunshot wound to his head, fired feloniously, wilfully and with malice by some person or persons unknown......"
(From here.)

The Father Griffin Commemoration will be held on Sunday next at 12 Noon in Bearna , County Galway - details here whilst two other brave Irishmen - Kevin Barry and Frank Driver - will also be remembered by Irish Republicans on that same Sunday , in Kildare and Carlow.
Details here.

"Yes , I am a dreamer. For a dreamer is one who can only find his way by moonlight , and his punishment is that he sees the dawn before the rest of the world."

An 'Oscar Wilde' tribute , from this blog to those three brave men who , having seen the (political) "dawn" , joined like-minded men and women in an organisation which is campaigning to hasten its coming.....
Thanks for reading,
Sharon.